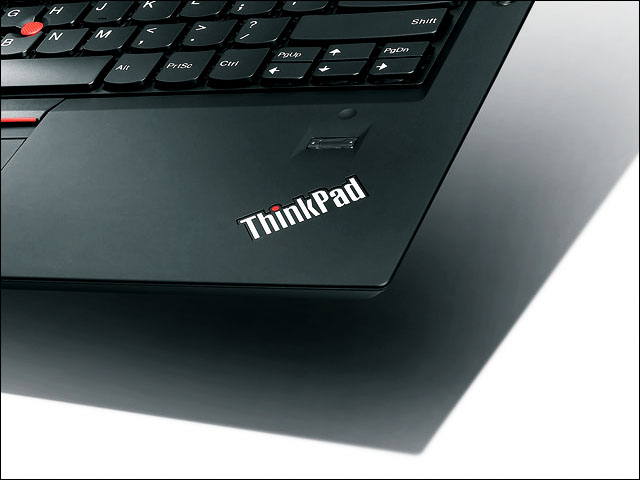 review The X1 comes from an illustrious line of business-oriented workhorses, and thankfully, Lenovo hasn’t strayed too far from tradition. The latest flagship ThinkPad retains the classic minimal aesthetic, and marries the ruggedised construction and best-in-class keyboard that existing ThinkPad users know and love with a few modern flourishes like a Corning Gorilla Glass display and the latest I/O ports.

Design
Even without that distinctive logo on the lid, we’d recognise this as a ThinkPad anywhere. The matte black casing, boxy shape and trademark red track pointer are all staples of the ThinkPad brand, and practically timeless as far as laptop design goes.

The X1 is the thinnest ThinkPad yet, measuring 16.5mm at its thinnest point and 21.5mm at its thickest. It’s also reasonably light for a 13.3″ notebook at 1.7kg, although recent notebooks from Apple, Sony, Asus and Samsung in the same class average a much lighter 1.2kg. In practical terms, this means the X1 is slim enough to grab with one hand without fear of dropping it – a factor that’s helped along by the soft touch rubberised coating.

But durability is the last thing you need to worry about on the X1.This laptop is built like a tank, with a carbon fibre internal roll cage, magnesium chassis, reinforced metal hinges, a spill-resistant keyboard and a Corning Gorilla Glass display. If that’s not enough, it also passes eight MIL-SPEC standards for things like humidity, vibration and mechanical shock. The 13.3in display folds back 180-degrees, making it near-impossible to snap off accidentally, and the motion of pushing it back and forth is smooth and deliberate – there’s no chance of the screen flopping around on its own when you’re using the X1 on an unstable surface (such as your lap).

Lenovo has kept the edges of the X1 fairly clean by sticking most of the ports on the back. There you’ll find a Gigabit Ethernet port and a SIM card slot, as well as USB 3.0, HDMI, mini-Display Port and combo eSATA/USB 2.0 ports.The left houses a combo headphone/microphone jack and another USB 2.0 port behind a flap, and the right side has a wireless switch and SD card reader. A VGA port is conspicuously absent, which may be an issue for those wanting to connect the X1 to an older external display monitor or projector. A fingerprint reader sits on the bottom right (a handy position for right-handers), and the margin to the right of the keyboard houses a large circular power button and dedicated volume, speaker mute and microphone mute buttons, as well as a shortcut key to launch the ThinkVantage Toolbox.

Features
The X1 is available in a few different configurations starting at $1,279, with second-gen Core i3, i5 and i7 full-voltage processors available, up to 8GB of RAM, and SSD and mobile broadband options. Our review unit, which has a 2.5GHz Intel Core i5-2520M processor, 4GB of RAM, a 160GB Intel SSD and 21Mbps mobile broadband, costs almost a thousand dollars more than the entry-level model at $2,128. There’s no option for a discrete video card – all models come with the integrated Intel HD 3000 graphics.

We developed a bit of a love-hate relationship with the X1’s 13.3″ screen while we were reviewing it. On the plus side, it’s nice and bright (350 nits), with decent horizontal viewing angles and a sturdy hinge that can lie the screen completely flat. The Corning Gorilla Glass display also makes it far more durable than average, but the flip side is that it gives the screen a reflective glossy coating. This means light sources like overhead bulbs and the sun – as well as your frowning mug – are reflected on the screen, which can be rather distracting when you’re trying to work.

Outdoor visibility is poor due to the reflected glare as well, and the nature of Gorilla Glass means that a matte finish option isn’t possible. Our other gripe is the middling 1366×768 pixel resolution — a low pixel count, given that other 13.3″ notebooks in this class typically offer 1440×900-pixel resolutions at the very least.

The keyboard, on the other hand, is perfection. ThinkPad devotees worried about the X1 moving to an island-style keyboard can rest assured: it’s still every bit as good as previous ThinkPad keyboards. The keys have the same concave surface that make it easy to feel for them with the tips of your fingers, and the typing action is smooth and precise, with just the right amount of key travel and that satisfying click when each key bounces off the base. If you’ve used a ThinkPad before, you’ll know exactly what we mean. There’s also lots of room to park your wrists below the keyboard.

A new addition to the ThinkPad line is the backlit-keyboard, with two levels of brightness (although you’ll have to switch it on manually). The track pointer, nestled between the G, H and B keys, works just as well as on previous ThinkPads, providing a more precise way to move the on-screen pointer around, and this is joined by a buttonless touchpad below it. This is nice and large, with a textured surface that provides a good amount of friction.

As you’d expect for business-focussed machine, the X1 runs the 64-bit version of Windows 7 Professional (although you can configure it with Windows 7 Home Premium to save money). The Core i5 processor on our review unit also has Intel’s vPro technology, which includes many hardware-level security features like hard drive encryption, anti-theft functionality and remote management capabilities. Other extras include support for Intel’s Wireless Display technology, and a 720p HD webcam with advanced microphone and video call settings.

Performance
For day-to-day productivity, the X1 performs like a champ. The combination of a speedy full-voltage Core i5 processor and solid-state storage on our review unit had it racing through our PCMark05 benchmark, returning a well-above-average score of 10,777 PCMarks. This was the power profile set to maximum high performance and Lenovo Turbo Boost+ enabled — the latter optimises fan speed to enable the best processor performance, but it also makes the X1 sound like small vacuum cleaner.

This PCMark score is over twice as good as its predecessor, the ThinkPad X301, which achieved a score of 4,457 PCMarks. Graphics performance, too, is a significant improvement from the X301. Using the 3DMark06 benchmark, the X1 scored 3533 3DMarks, compared to only 712 3DMarks on the X301. This won’t see you playing any of the latest 3D games on the X1, but it does mean that it will play Full HD videos without breaking a sweat, and it’ll sound pretty impressive while doing so thanks to the integrated Dolby Home Theater v4 audio.

From a cold boot, the X1 can get to the Windows desktop in only 26 seconds, and resume time is pretty fast at 6.2 seconds. You can go from zero to productive even quicker by enabling the ‘Instant Resume’ feature in Lenovo Power Manager, which keeps the network connection alive (802.11n Wi-Fi, mobile broadband, or both) for a certain period of time while the lid’s closed. so you don’t have to reconnect when you wake the laptop up.

Ready for the bad news? Battery life is the X1’s biggest weakness. Lenovo has used a non-removable 4-cell battery to minimise the X1’s thickness, and claims it’ll maintain a full charge for three years. Be that as it may, it doesn’t actually last all that long per charge. Using the default power settings, it lasted for only 3 hours and 14 minutes of Web browsing over Wi-Fi (with (5 percent battery still left) before it automatically powered off.

You can extend battery life further using the Lenovo Power Manager utility, but it’s still a poor effort for a laptop designed for mobile professionals. A small consolation is the RapidCharge technology feature, which recharges the battery crazy fast — 80 percent charge in less than half an hour from a dead battery, and 1 hour and 15 minutes for a full charge. An optional 6-cell slice battery is available for $250 that clamps to the X1’s underside boosts this run-time to 10 hours, but it adds a lot of extra weight and thickness as well.

Conclusion
There’s a lot to like in the latest flagship ThinkPad. The premium materials, semi-rugged construction, and ultra-slim profile all amount to a beautifully-engineered laptop that’s more than capable of handling the day-to-day drudgeries of office work. This is a first-class machine that offers almost everything a mobile professional would want in a notebook. Unfortunately, the one thing it does lack, long battery life, is a significant compromise that we’re not sure many road warriors will be happy to make. For this class of notebook, we’d expect battery life to be twice as long at least.

If you do most of your work in the office, and only move around for the occasional meeting, the ThinkPad X1 offers a fabulous user experience that few other notebooks match. But if you need a machine that will last for long stretches away from the charger, there are other ultraportables that are much better suited for the job.