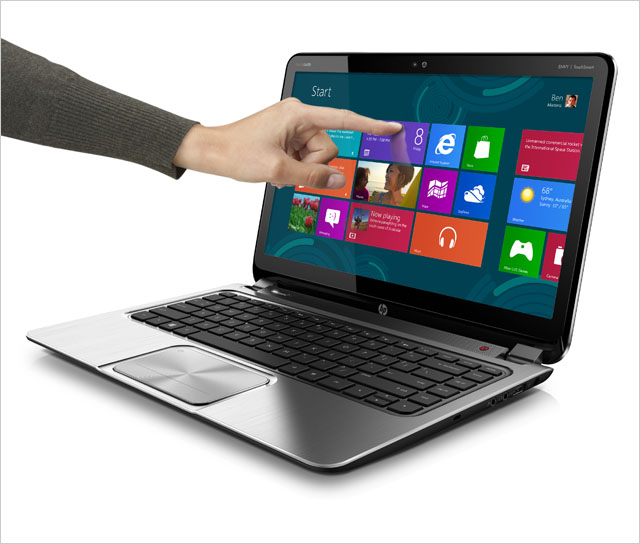 news The first tranche of new laptop models slated to land in Australia and fuelled by Windows 8 have been announced by Hewlett Packard, with three new models due to launch locally later this year, all featuring touchscreens that take advantage of the new touch features of the new Microsoft operating system.

Almost all current laptops available in Australia are modelled along traditional lines — featuring a keyboard, trackpad and monitor which does not feature any touchscreen capability. However, Windows 8 has been redesigned from the ground up to integrate touchscreen features, in a design approach which commentators have said is designed by Microsoft to keep ahead of the growing appetite for tablets led by Apple’s iPad. In the US today HP announced three new laptops which the company said would also launch in Australia later in 2012, which are designed to take advantage of this feature. No local pricing or concrete launch dates are available yet.

The most visibly different of the three, the HP ENVY x2 model, is effectively a laptop which doubles as a tablet as its screen can be separated from its keyboard through a “seamless” magnetic latch. In a statement, HP said that the total unit weighed 3.1 pounds (1.4 kilograms), while the tablet unit alone weighed 1.5 pounds (680g). These weights are a little heavier in general, but broadly comparable to current tablet and laptop weights.

The ENVY x2 features a 11.6″ screen, with an IPS display pan with a brightness of 400 nits. An eight megapixel camera on the back and a HD webcam on the front (for videoconferencing) are included, and HP has integrated audio from Beats with a view to providing quality sound on the unit. The company has not provided any other specifications for the unit, or pricing.

A second unit, the Spectre XT TouchSmart Ultrabook, features a 15.6″ touchscreen, and weighs 4.77 pounds (2.16kg). This model is designed more as a traditional laptop, with its screen not able to be disconnected. It will feature Intel’s latest Ivy Bridge processors, and a SSD drive in several sizes, and it comes with a number of new features, such as a Thunderbolt port. The Elements versions of Adobe’s Photoshop and Premiere editing suites will also come bundled in. It will sell in the US in December for a price starting from US$1,399.99.

Lastly, HP has also introduced the ENVY TouchSmart Ultrabook 4, a 14″ laptop weighing 4.77 pounds (2.16kg). It features similar specifications to the Spectre XT, but can also feature an optional AMD dedicated video card, and will also go on sale later this year, although prices have not yet been announced.

“Consumers want the flexibility to move between creating rich documents and losing themselves in a great movie,” said James Mouton, senior vice president and general manager, Personal Computer Global Business Unit, HP. “With the HP ENVY x2, customers can have it all, and the touch experience on these three new notebooks brings out the best of Windows 8.” HP will also be announcing additional notebooks, desktops and tablets “later in 2012”.

opinion/analysis
It is with mixed feelings that I begin reporting on the first batch of Windows 8 laptops, PCs and quasi-tablets to begin entering the Australian marketplace.

On the one hand, it is apparent that every major Windows OEM is about to start flooding Australia with Windows 8 gear. Dell, Lenovo, ASUS, Samsung, HP, Acer and so on — all of these companies right now feel that they must have new Windows 8 gear to launch when Microsoft’s latest opus goes on sale shortly. They’re all excited about it, and all in competition with each other.

However, on the other hand, it’s hard not to agree with the vast number of commentators who have pointed out recently how much of a trainwreck Windows 8 is, and how it is destined to fail and frustrate millions of people along the way.

If you’ve tried Windows 8 at all (as I have), you’ll know that not only is this an operating system which is very much still half-baked (for example, it doesn’t correctly handle many games installed through Valve’s dominant Steam platform), but that even if you’ve been a Windows user for several decades, you still will take weeks, possibly months to get used to Microsoft’s new user interface paradigm. There are countless articles online devoted to bagging Windows 8, and we find it hard to disagree with any of them. Windows 8 is truly awful; breaking decades of user experience training and trying to enforce a new tablet UI paradigm on users who don’t want their desktop to be a touchscreen device.

In addition, to be honest, there really isn’t anything wrong with Windows 7, which we rely on every day, and many people still haven’t upgraded to it from Windows XP.

We’ve been here before; about two years ago, most of these same OEMs started flooding Australia with Android tablets. Again, almost universally, these devices were quite mediocre and not yet ready for mainstream consumption. As a consequence, Australians virtually ignored all of the devices and went for the iPad instead, which was a quality device and not half-baked.

It’s taken two years for a tablet to come along to challenge that dynamic — Google’s Nexus 7 — and I very much suspect that it will take another two years before we start to see decent Windows 8 machines, if ever — given the fact that Windows 8 on the desktop looks a lot worse than old versions of Android did on tablets. I suspect that what we’re seeing here from HP is a quick attempt to slap Windows 8 into hardware which hasn’t really been optimised for it, and I suspect we’ll see this approach from almost all of the other manufacturers as well.

Microsoft’s own Surface tablet is possibly the only really promising Windows 8 device we’ve seen so far — and that’s because it seems designed to appeal primarily to the enterprise, which so far seems vaguely enthusiastic about an easier to manage tablet as an iPad alternative. In any case, although I’m not optimistic at this point, it will certainly be interesting to get some of these new Windows 8 models in for testing. Perhaps they will be surprisingly good. But I’m not holding my breath.