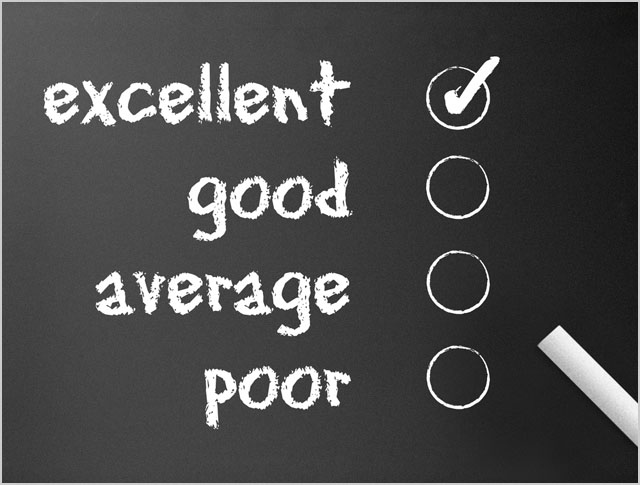 If you believe the headlines swamping Australia’s media following the release of the Coalition’s rival NBN policy several weeks ago, the Australian public overwhelmingly rejected the policy. An informal poll taken by the ABC showed that 78 percent of some 5,700 readers didn’t support the new, predominantly fibre-to-the-node approach delivered by Shadow Communications Minister Malcolm Turnbull. And polls taken by the ABC and Nielsen, as well as Essential Media, purported to show the same. “Poll shows voters prefer Labor’s NBN,” was the way The Sydney Morning Herald portrayed the story. Most other media outlets followed. In the wake of the announcement, with technical experts rejecting the plan wholesale and the #fraudband hashtag lampooning Turnbull and Abbott constantly, it was an easy and logical story to pursue.

And broadly,this was an accurate depiction of the situation. Polling of the Australian public continues to show — and has shown for several years now — that Labor’s NBN policy remains overwhelmingly popular with the electorate. The NBN’s popularity has always been highest amongst those who identify as Labor or Greens voters, but it has even historically enjoyed strong levels of support on the opposite side of the fence — those who vote for the Coalition.

However, if you dig into the polling data released directly after the Coalition’s policy release, and compare it with several years’ of historical data on the NBN issue, there are also several other important sub-trends which emerge.

To illustrate what I’m talking about here, let’s examine the most recent NBN polling data taken immediately prior to the Coalition releasing its alternative policy. As chronicled in this article at the time (and the raw data is available online as well), what the poll taken in March by research house Essential Media put to some 1,874 Australians was the question of whether they supported or opposed Labor’s NBN project.

The detailed results also showed that while support for the NBN was strongest amongst Labor and Greens voters (88 percent in both camps supported the NBN), the majority of Coalition voters also supported the NBN, with 61 percent in total supporting the project and only 33 percent against it. Only 18 percent of Coalition voters strongly opposed the project, while a further 15 percent opposed it.

If you look at earlier polling data, especially those polls which attempted to display the differences in attitudes between different classes of voters, what you’ll find is that there has historically been a trend of increasing support for the NBN amongst voters from both sides of politics.

For example, a poll taken by Australian social and market research company Your Source in February 2012, involving about 1,000 respondents, asked the following question: “From what you’ve heard, do you favour or oppose the planned National Broadband Network (NBN)?” The response displayed an enduring level of support for the NBN, with 56 percent of total respondents supporting the NBN in total, compared with 25 percent opposed and 19 percent stating that they didn’t know.

Over the preceding 14 months before the poll was taken, Your Source asked respondents the same question on three other occasions, with respondents in total displaying a very similar support rate for the project — ranging from 48 to 56 percent. Those opposing the project have ranged from 19 percent of respondents to 27 percent.

In order to see how things changed amongst supporters of the various parties following the Coalition’s policy launch in April this year, you need to go a little deeper into the data than was typically reported in most media articles. The best source here is a poll conducted by Nielsen of some 1,400 respondents, in the days immediately after the Coalition had its policy launch. Nielsen has made the full results available online in PDF format.

What the data shows (see the table below), is that the release of the Coalition’s NBN appeared to have polarised supporters on all political sides. When it comes to Labor and Greens voters, respondents were more likely to support Labor’s existing NBN project than they had been in the past (Nielsen found 85 percent and 86 percent support from these camps respectively, amongst those who had heard of Labor’s policy), representing even higher levels of support for the policy than had been seen amongst Labor and Greens voters previously. 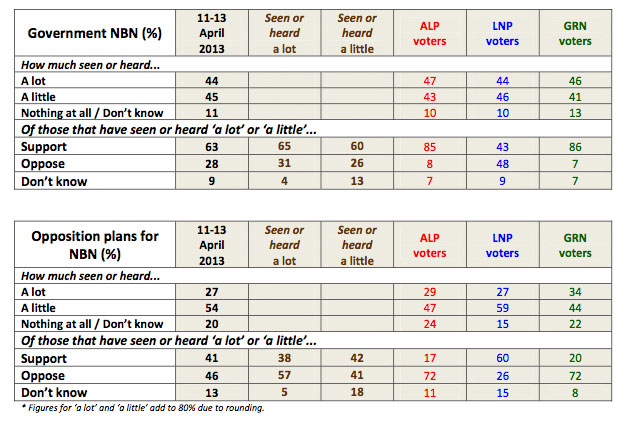 When it came to the Coalition’s own NBN plan, only small numbers of Labor and Greens voters who had heard of it supported the rival policy (17 percent and 20 percent respectively), while most (72 percent each) opposed it. However, amongst Coalition voters, the Coalition’s NBN plan received strong support — 60 percent — with only 26 percent being against it.

What this data appears to show is that the release of the Coalition’s NBN policy polarised voters. It further entrenched the popularity of Labor’s NBN plan amongst existing Labor and Greens voters. On the other hand, the policy appears to have been moderately successful in reducing support for Labor’s NBN policy amongst Coalition voters, and the majority of Coalition voters indicated that they did support the Coalition’s new NBN policy.

This has some interesting implications for those mocking the Coalition’s broadband plan as “#fraudband“, on social media platforms such as Twitter. It indicates that this kind of sentiment is coming from a certain proportion of the population, but does not represent the overwhelming view of the majority of the electorate as a whole. The truth is that Australians do still prefer the NBN, but that the Coalition’s alternative has also found acceptance in a wide swathe of the population, primarily those who already sympathised with the Coalition. In addition, it seems clear that increasingly those who prefer the NBN are Australians who had existing political sympathies towards Labor and the Greens.

There are some caveats to this analysis.

For starters, Nielsen noted in its analysis of the polling data that opposition to the Coalition’s broadband plan was greatest (57 percent) amongst those who claimed to have heard “a lot” about it. This mirrors the situation with previous unpopular policies in the technology portfolio such as Labor’s doomed Internet filtering project, where research consistently showed that the more educated people were about the policy, the less they liked it.

Secondly, it remains unclear what swinging voters, or those who don’t identify with any side of politics, think about the NBN. None of the polls we examined for this article went into depth on the views of this crucial part of the electorate.

To paraphrase the character of Sarah Harding in the popular British mini-series To Play the King, it’s possible for an intelligent pollster to deliver whatever result their political master requires, to suit a given political circumstance. It’s all done by asking the right questions at the right time of the right people.

However, what the data does appear to indicate at this stage is that the current popular view of the two competing NBN policies is not one-sided. While Labor’s NBN policy is more popular overall, the Coalition and particularly Malcolm Turnbull was successful in ‘moving the needle’ of opinion, particularly amongst its own supporters, with the launch of its rival NBN policy. To the extent that many political commentators have argued that this was all that Turnbull’s policy needed to do — to ensure the Coalition’s NBN policy was seen as vaguely comparable to Labor’s own — the launch could be seen to be somewhat of a success.