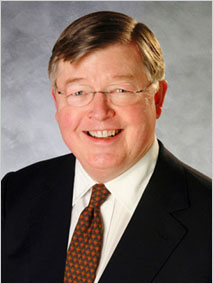 blog The Financial Review has been on a bit of a roll when it comes to its coverage of the National Broadband Network over the past week, and at midnight last night it added to its spate of discoveries about the company constructing it. Last night the media outlet reported that NBN Co chairman Harrison Young (pictured) was planning to quit as the company’s chairman, with current board member Siobhan McKenna to step into his place. The company’s article states (we recommend you click here for the full article):

The publication also published another article with a number of other claims about the progress of the company’s fibre rollout and negotiations with contractors. Look, folks, while the AFR hasn’t always been as reliable about the NBN as it could have been, its reports overnight are looking broadly accurate. None of NBN Co’s spokespeople are returning Delimiter’s calls this morning, and neither is the office of Communications Minister Stephen Conroy. We’d say this indicates the two groups are consulting right now as to how to handle this latest embarassing stuff-up when it comes to the NBN. It’s just not a good look for the company’s chairman to quit, just a few months before key rolllout targets are due to be met and in the midst of Labor’s ongoing leadership crisis.

We’d say Mr Young has demonstrated an amazingly poor grasp of the political process by quitting at this time; perhaps this means he never had the kind of discretion required to lead NBN Co’s board in the first place. Likewise … we can’t say we’re a huge fan of McKenna’s appointment, if true. This is McKenna’s NBN Co biography:

“Ms McKenna was appointed as a director on 5 August 2009 and reappointed on 5 August 2012. Ms McKenna is a director of Ten Networks Holdings, DMG Radio Australia and The Australian Ballet. She is the Managing Partner of Illyria Pty Ltd and is on a leave-of-absence as a Commissioner of the Productivity Commission. Previously Ms McKenna was a partner at international management consulting firm McKinsey & Company where she specialised in advising telecommunications and media companies. She was also a Member of the Advisory Board of the Australian Bureau of Meteorology. Ms McKenna’s current term will expire on 4 August 2015.”

See a lot of experience in there rolling out massive swathes of telecommunications infrastructure? Yeah, not so much. It seems like this would have been a useful kind of experience for a chairman of NBN Co. But then Young didn’t have that either, so what do we know?