news Technology giant Apple has revealed it had a record year in terms of revenues and profits from its Australian operation over the past year, raking in revenues up 23 percent to almost $6 billion, as new iPad and iPhone launches sent the company’s finances into the stratosphere over the past 12 months.

The figures were revealed in Apple’s Australian financial results published with the Australian Securities and Investments Commission, shortly after the company released its global quarterly results in the US. They show that over the year to the end of September 2012, Apple pulled in local revenues of $5.99 billion over that year, up 22.9 percent from the previous year’s figure of $4.87 billion. 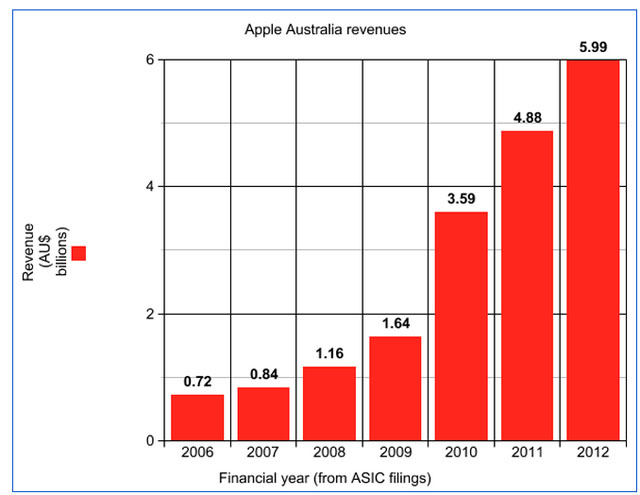 The past 12 months have also seen Apple Australia massively increase its headcount. In the previous year it had 1,505 staff, but at the end of September 2012 that figure had jumped to 2,418. It is believed that the massive jump in headcount was primarily due to the ongoing expansion of Apple’s own retail stores around Australia, with the company rapidly adding new stores in a range of diverse locations throughout the nation over the past several years.

In its financial statements, Apple attributed the “momentum” in its growth in Australia to “the release of new products such as the iPhone 4S and iPhone 5 as well as new iPad into Australia and New Zealand”, as well as “further retail expansion in Australia”.

If you examine Apple’s Australian financial results for the past half-decade, it’s clear that the company’s launch of innovative new product lines such as the iPhone, iPad and new versions of its iPod, MacBook and iMac lines, as well as subsidiary products such as its iTunes app and music stores, have had upon its business. In 2006 in Australia, Apple was making less than a billion dollars in local revenue. However, the company then grew steadily throughout the next several years, and saw a substantial jump in 2010 after the first iPad was launched.

In addition, there is also reason to suspect that Apple Australia’s revenues will grow further in the next 12 months. Last week Apple released its global quarterly results, representing the first full quarter since the company released its new iPhone 5 and iPad mini models. The results represented record revenue levels for Apple and also some of the highest revenues of all time for any company in any given quarter.

“We’re thrilled with record revenue of over US$54 billion and sales of over 75 million iOS devices in a single quarter,” said Tim Cook, Apple’s CEO. “We’re very confident in our product pipeline as we continue to focus on innovation and making the best products in the world.”

“We’re pleased to have generated over US$23 billion in cash flow from operations during the quarter,” said Peter Oppenheimer, Apple’s CFO. “We established new all-time quarterly records for iPhone and iPad sales, significantly broadened our ecosystem, and generated Apple’s highest quarterly revenue ever.”

The next time Apple is likely to release yearly financial results in Australia will be January 2014, when the company will release results for the year to the end of September 2013. This period will include the final calendar quarter of 2012, and will give the first real picture of how the company’s Australian financial results will be impacted by the release of the iPhone 5 and iPad mini.

The news of Apple’s financial results comes as the Australian Government has recently outlined a series of new legislative initiatives with which it will attempt to protect its corporate tax base and rein in the tax minimisation strategies of corporations such as search giant Google and Apple, which are both known for their tax minimisation strategies including offshore corporations in locations such as Ireland.

The Government has announced measures specifically designed to tackle the issue of Australian subsidiaries such as Apple Australia from dealing unfairly with their US parents – such as in the financial accounting of the cost of goods imported by the local subsidiary but manufactured overseas by its global parent.

Last year, Communications Minister Stephen Conroy said in a said new so-called ‘transfer pricing’ legislation would be introduced by the Federal Government shortly to deal with this kind of behaviour by multinationals operating in Australia. The text of the Tax Laws Amendment (Cross-Border Transfer Pricing) Bill (No. 1) 2012 (PDF here) states that the object of the legislation is to ensure that profits would be brought within reach of the Australian taxation system which would have accrued to an Australian entity if it had not been dealing at proper arm’s length terms with its foreign associated entity.

opinion/analysis
In January 2012, when Apple released its last set of Australian financial results, I wrote:

I’ve never seen anything like this level of revenue growth from any other technology company operating in Australia. The only example I have to compare it to would be the massive jump in local revenue experienced by networking giant Ericsson in the 2006 calendar year, when it booked $1.4 billion in revenue — up from $557 million the previous year. However, that jump was only temporary — and was caused by a billion-dollar contract Ericsson signed with Telstra to build its Next G network.

Yes, I predicted Apple Australia’s 2012 revenue almost to the dollar :)

In general these comments still stand, and I would add that I believe it very likely that Apple Australia will push towards the $7 billion revenue mark or higher in its next set of Australian financial results. This is a massive company and a huge part of the Australian economy. With this in mind, I hope that the Australian Taxation Office is keeping a close eye on Apple Australia’s finances. The company is pulling huge sums of money out of Australia at the moment. Taxes of $40 million, off revenues of almost $6 billion? That hardly seems fair.