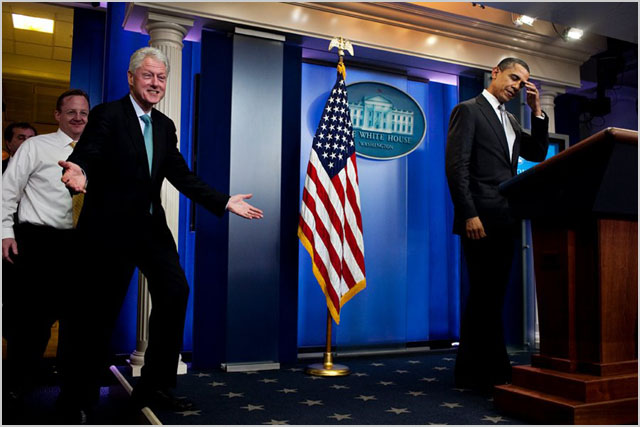 blog Seems like it’s not only Australian politicians who can get the NBN bug. We’re a bit late to this party, but we thought it would be worth getting on the record that in late December, former US President Bill Clinton jumped on the NBN train wholesale courtesy of a keynote speech at Dell’s annual confab in Austin, Texas. According to Clinton, whose comments were quoted by various publications and crystallised on NBN Co’s own blog:

“You want to help small businesses, you want to help new entrepreneurs? You want to make it possible for people living in remote towns in upstate New York or West Texas to be part of the global economy? “Then stop pretending we can do it with South Korea having average download speeds of four times ours. “They’re first in the world, we’re now 15th or 16th. That’s not that expensive.”

“American companies have a trillion dollars overseas,” Clinton said. “I would like to see a deal made which would say to Dell and everybody else … if you’ve got any cash overseas that you’re willing to bring home, you can bring home every penny of it, up to December 31st 2012, with no extra tax liability … if you will put … pick a number … eight per cent of it … five per cent of it … in an infrastructure bank where we will guarantee you a tax free return on investment as if it were a municipal bond with a return on investment of six per cent per year. Now, that would give us probably $50 billion.”

“Then we could bring universal modern broadband to every American.”

Sounds like a pretty good deal to me — and the whole idea doesn’t actually sound too far away from what Australia’s doing, although we suspect it might cost a wee bit more than $50 billion to wire up the entire United States — given that Australia’s own NBN project is clocking in around $37 billion in terms of its own required capital investment. However, we don’t envy the task of any US administration which wants to implement this kind of project, given the half-dozen major telcos — all former monopolists like Telstra — which hold sway over various regions of the country. You thought the NBN was complex? A US NBN would be infinitely more so, and probably infinitely more controversial. One benefit of being only a moderately sized country. There’s only so many people you need to talk to to get stuff done.