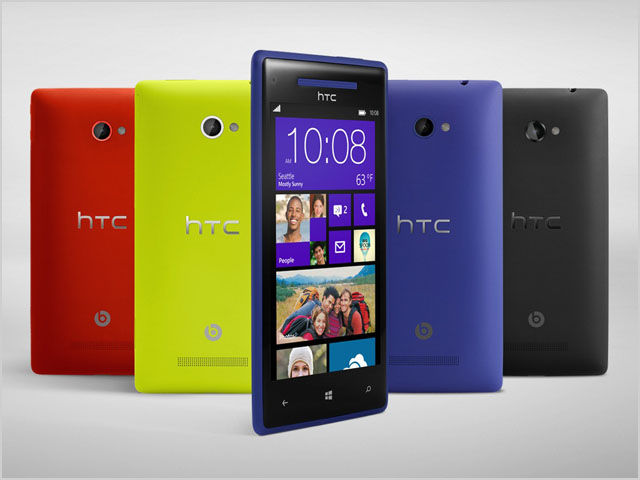 preview With its upcoming Windows Phone 8X line, Taiwanese consumer electronics giant HTC has thrown its hat into the Windows Phone 8 ring with a vengeance, taking some colour cues from Nokia and signalling its intention to be fully on board with Microsoft’s new mobile operating system. But can these vibrant handsets beat out the competition? Read on to find out.

Design
One has to wonder whether HTC would have launched as colourful a range as the Windows Phone 8X line if Nokia hadn’t already paved the path to fluorescent glory with its Lumia series. With the possible exception of the black model, none of HTC’s Windows Phone 8X models are quite the same hue as any of Nokia’s Lumias, but there is definitely more than a hint of Nokia’s design inspiration here. And to our mind, that’s a good thing, as we consider the Lumias to be some of the best-designed smartphones available. Most reviewers tend to agree.

HTC’s new models come in four colours: ‘California Blue’, ‘Graphite Black’, ‘Flame Red’ and ‘Limelight Yellow’, and appear to be made from the same polycarbonate material in a similar unibody size and shape to Nokia’s Lumia line. As with the Lumias, each of HTC’s models place a huge emphasis on their touchscreen, with the normal three Windows Phone buttons beneath the screen (back, Windows and search), and a nicely sized speaker grille and front-facing camera on the top. And, as with the new Windows Phone 8 Lumias, the software tiles on the Windows Phone 8X’s screen are set by default to the same colour as each phone’s casing, in a nice synchronicity.

The left-hand side of the Windows Phone 8X is bare, while on the right sits the SIM card slot, the normal HTC volume buttons and what appears to be a dedicated camera button. On the back, in the normal spot, is the phone’s dedicated camera, and another speaker grille sits at the bottom. The top of the phone features its on/off button and a 3.5mm headphone jack, while its microUSB charging/synching port sits on the bottom. The Windows Phone 8X measures 132.35mm by 66.2mm by 10.12mm, and it weighs 130grams.

Overall, the design of the Windows Phone 8X reminds us a great deal of a mix of HTC’s Titan 4G model, which was one of the first 4G smartphones to launch through Telstra earlier this year (it runs Windows Phone 7), and Nokia’s Lumia line. The Windows Phone 8X is extremely similar to the Titan 4G in overall design – with most of its physical features in similar locations, but HTC appears to have taken inspiration from the Lumia’s fluoro polycarbonate unibody design for its new line of Windows Phones. In general, we like the design quite a bit, but we do feel as though HTC’s colours don’t have quite the same subtleties as the Lumias – they’re a bit bright and vibrant for our taste. We like, however, the fact that all the controls are in roughly the same place as on other HTC models — this design consistency is a strong suit of HTC at the moment.

Features
The Windows Phone 8X comes with a nicely sized 4.3” touchscreen covered with Corning’s Gorilla Glass 2 (larger than the iPhone 5, at 4”, and smaller than the Samsung Galaxy S III, at 4.8”), and HTC says it runs at one of Windows Phone 8’s new resolutions, 1280×720. It comes with 16GB of storage and no microSD card expansion option. The processor is a Qualcomm S4 dual-core model running at 1.5GHz, and 1GB of RAM is included, as is an NFC chip for mobile payments.

The Windows Phone 8X’s main camera is an eight megapixel model, similar to the unit we’ve seen recently on a number of other HTC models such as the One X and One XL, and it can similarly shoot video at 1080p. The front camera boasts a 2.1 megapixel rating, and it can also shoot 1080p video, which is unusual for a front-facing camera. These kinds of cameras are usually used mainly for video calling. The battery of the Windows Phone 8X is a 1800mAh model, which is fairly comparable to other models on the market, if as not powerful as the 2100mAh model found on Samsung’s Galaxy S III.

The other major new feature which the Windows Phone 8X introduces – and one of its key selling points – will be Windows Phone 8, which has not yet been released by Microsoft. Microsoft’s new mobile operating system features a slew of new and long-awaited features, ranging from multi-core CPU support, to a resolution bump (1280×768 or 1280×720), the ability to support microSD cards, NFC chip support, Internet Explorer 10, a Wallet feature for storing debit/credit cards, coupons and boarding passes and better maps and directions (through integration of Nokia’s maps feature). Most of these features were already available through Apple’s iOS and Google’s Android platforms, and Windows Phone users have been waiting them for a long time for the Microsoft platform. We’re very glad to see them arrive.

However, given the past strong performance of HTC handsets such as the One XL, the One S, the Desire, the Incredible S, the Titan 4G and others we’ve reviewed over the past several years, we expect the HTC Windows Phone 8X to also feature strong build quality and perform well in tests, with the new version of Microsoft’s mobile operating system likely to help push these handsets up close to par with top models from Apple, Samsung and Nokia.

One area we will be watching closely is the Windows Phone 8X’s battery life. This has been an area of moderate concern for HTC recently, with its One XL handset, for example, needing to be recharged more regularly than some of the competition. Windows Phone 8 is also an untested quantity in this regard. And it will be interesting to see how well Windows Phone 8 in general is supported by Australian independent application developers. There’s already a wealth of third-party apps with Australian content for the iOS and Android platforms … is Windows Phone slowly catching up, or is it lagging behind? We’ll seek to investigate this area.

Conclusion
We haven’t tested either handset yet, but on paper, Nokia’s Lumia 920 is looking like a better buy for Windows Phone enthusiasts who want to get on board with the new version than HTC’s Windows Phone 8X. Nokia’s handset supports 4G speeds in Australia, while HTC’s model does not appear to, and that’s a big deal right now. If you can get 4G on your smartphone in late 2012, you definitely should, and most manufacturers have very solid models out supporting 4G. In addition, the Lumia 920 will also come with a number of specialised apps produced by Nokia which do add a small to moderate amount of value to the 920, depending on how much you use them.

Right now, Nokia’s Lumia series represents the flagship line when it comes to Windows Phone models, due, no doubt to its partnership with Microsoft. Unlike HTC, Nokia simply doesn’t produce Android models, meaning it’s got all of its eggs in the Windows Phone camp, and that focus appears to have paid off with the Lumia 920, which right now is looking like the best Windows Phone model which money will be able to buy, and certainly the leading light of the incoming range of Windows Phone 8 models. In comparison, HTC’s Windows Phone 8X range is looking very strong, but on paper it runs a little behind the 920. We’ll be fascinated to see how both perform in our labs when they arrive sometime over the next several months.

HTC has said the Windows Phone 8X will be available “beginning in November”, through Australian carriers Telstra, Optus and Vodafone, but it has not given any specific Australian launch details as of yet.