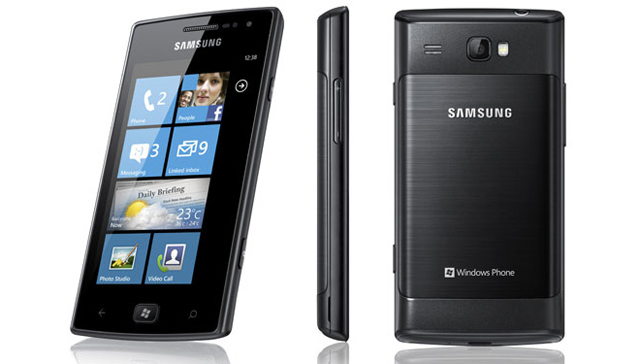 news Nokia’s Lumia handsets might be just around the corner, but Korean electronics giant Samsung has beaten its Finnish rival to the punch when it comes to new Windows Phone 7 smartphones available in Australia, launching its high-end Omnia W handset through Telstra this week.

The Omnia W appears to be the first second-generation Windows Phone 7 handset to launch in Australia, with the operating system languishing since Telstra and Microsoft, partnership with companies like Samsung and HTC, launched the first range of Windows Phone 7 smartphones locally in late 2010.

Samsung wouldn’t comment on the release of the Omnia W this week, but Telstra is openly advertising the handset through its website on plans worth $99 or above, and local blog Windows Phone Down Under has reported that it had been given a review handset by Telstra.

Telstra’s site states that the Omnia W – the follow-up to Samsung’s earlier Omnia 7 handset – comes with a 1.4GHz processor, 8GB of on-board storage space, and a 4.7” Super AMOLED touchscreen running at a resolution of 480×800. The phone weighs 115 grams and has dimensions of 115.9mm by 59.8mm by 10.89mm. Telstra is advertising the phone as having a battery that can last for up to 180 minutes worth of talk time, or up to 250 hours of standby time.

Windows Phone Down Under notes that the phone comes with 512MB of RAM and a five megapixel rear camera. It runs the ‘Mango’ version of Windows Phone 7. The site wrote in its review of the phone:

“Windows Phone “Mango” absolutely shines on the device – and I see this handset having no issues in “smoking” any other modern smartphone for both task activities (messaging/social media etc) and speed and responsiveness of the OS. Storage aside, there is not really any other significant weak spot in this device. Make sure you get into a Telstra store and have a feel of the unit, demo it – as it is surprisingly good device.”

Telstra has made the phone available on its $99 monthly plan for no extra handset repayment fees. The information on its online shopping portal is inconclusive, but it is likely to also be available on lower plans, with a monthly fee for handset repayment. WP Down Under has reported that the handset will cost $528 outright.

opinion/analysis
It’s about time we had some new Windows Phone 7 smartphones in Australia, and the Omnia W looks like a nice upgrade to the now-defunct first-generation models which Telstra and Microsoft introduced in late 2010. These are the same Windows Phone 7 phones which Optus and Vodafone are still selling.

However, I must note that I don’t think the Omnia W is the best buy if you’re an Australian looking to pick up a new Windows Phone 7 phone in the near future. Frankly, I expect Nokia’s Lumia 800 handset (and, will we eventually see a Lumia 900? Maybe in six months) to do very well in Australia. Delimiter’s review of the handset has already noted how stellar it is, and it launches in Australia in March through all of the big three mobile carriers.

In comparison, Samsung’s Omnia W comes across on paper as a fairly solid phone, but nothing special – fairly generic when compared to the eye-catching design and stellar engineering of the Lumia line.

Despite this, of course, Samsung has built a reputation for awesome quality recently, with the Galaxy Nexus and Galaxy S II being two of the top phones of 2011, by any measurement. It may be that with the Omnia W, Samsung has yet another winner to notch up on its belt of accomplishments. We’ll try to get a review model in to determine the truth once and for all.