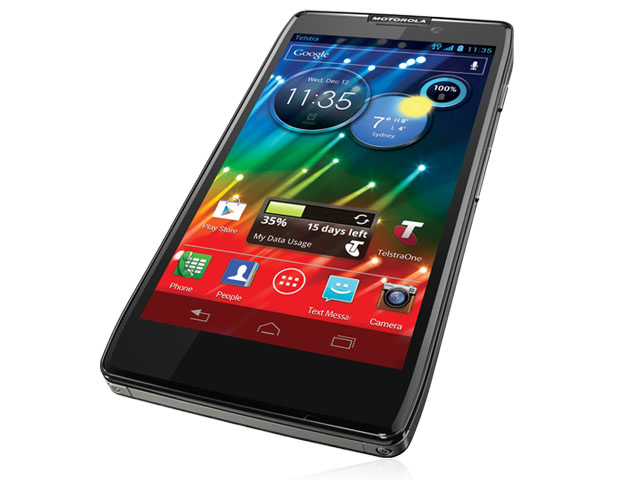 news Google subsidiary Motorola has revealed it will launch two new Android-based handsets in Australia in the last three months of 2012, the RAZR M and the RAZR HD, with both models to be available exclusively through the nation’s largest telco Telstra — and supporting 4G speeds.

The RAZR HD is Motorola’s new flagship model, featuring a 4.7″ Super AMOLED touchscreen at a resolution of 1280×720, but it shares a number of specifications with the RAZR M, which is a touch smaller with a 4.3″ Super AMOLED screen at a resolution of 960×540. Both phones feature a dual-core 1.5GHz processor and 1GB of memory, although the RAZR HD has 16GB of internal storage compared with the RAZR M’s 8GB.

Both with ship with the Ice Cream Sandwich (version 4.0) version of Google’s operating system, although Motorola has stated that the pair will be updated to the newer ‘Jelly Bean’ version (Android 4.1) by the end of 2012. Both also come with an industry-standard eight megapixel camera capable of shooting video at 1080p. The pair differ in their battery sizes, with the RAZR HD featuring a 2530 mAh battery and the RAZR M a 2000 mAh model.

A spokesperson for Motorola confirmed the models would support Telstra’s 4G network at 1800MHz. Optus’ 4G network uses the same spectrum band, meaning it is likely both models will be able to be ported across to Optus’ 4G network if a customer buys them outright or is out of contract.

Motorola’s RAZR line has received positive reviews recently, although it has not been noted as a standout manufacturer. For example, Delimiter’s review of the similar RAZR V which recently launched in Australia stated:

To be honest, we really liked the RAZR V. It’s got all of the specifications most people want in a modern smartphone, it’s got a nice design which sits well in the hand, a nice and responsive touchscreen, and it doesn’t come with a lot of bundled bloatware like some other models do. This is a classy, well-built smartphone which is a credit to its manufacturer.

But would we buy one for ourselves? Probably not.

The difficulty for the RAZR V is that it does what it does very well, but it doesn’t do anything to differentiate it from the pack of similar Android smartphones released in mid-2012. It doesn’t have 4G speeds, Jelly Bean, an amazing camera, a huge touchscreen, stellar battery life or anything else which would attract people to buy it instead of a Samsung Galaxy S III, for example, or an Apple iPhone 4S, or one of HTC’s One series models. And all of those smartphones offer differentiating factors compared with the RAZR V.

One factor which the RAZR V does have is its price. It’s selling for $4 a month on a $35 monthly plan from Optus — making it one of the cheaper high-end Android smartphones available in Australia. Mobicity doesn’t appear to stock the phone, but it does have the very similarly specced RAZR MAXX for $499 and the fairly similar RAZR Spyder for $379.

opinion/analysis
As with the RAZR V, these are looking like very good smartphone models from Motorola — up to date with most modern specifications and with good design and build quality. However, with the HTC One XL and the Galaxy S III on the market, both supporting 4G as well, and Apple about to release a new iPhone, which will likely also support 4G speeds in Australia, we just can’t see these new RAZRs flying off the shelves. Perhaps the only way they will is if Motorola integrates the stellar Jelly Bean Android update sooner than most people think, or if the company makes them cheap enough that they’re almost an impulse purchase. We’re in a highly competitive smartphone market right now — which is great for consumers, but bad news for mid-tier smartphone manufacturers like Motorola.