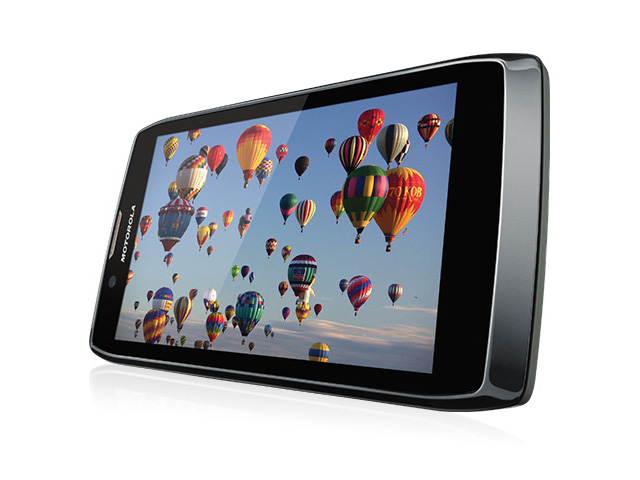 review The RAZR V is the newest smartphone in Motorola’s RAZR line, and boasts a number of high-end features that (on paper) put it neck and neck with the best that Samsung, HTC and others have to offer. But can the RAZR V do enough to re-kindle the magic for the ailing Motorola mobile brand? Read on to find out.

Design
The Motorola RAZR V’s design is markedly different from most of the other high-end smartphones currently on the market. It’s not curvy and smooth like the HTCs and Samsungs of this world, and it’s not a flat rectangular slab like Apple’s flagship iPhone. Instead, it feels like it sits somewhere in the middle, with bevelled grey edges around the sides but a flat front and back, with a little lip on the bottom at the back, a little like Huawei’s Ascend P1. It’s constructed from a smooth plastic material, with a grippy stripey pattern on the back which we really liked.

Overall, the RAZR V reminded us a little of Research in Motion’s popular BlackBerry line, circa 2007 or so — or even a Nokia model from the same era. Square, but not too square. Rounded, but not too rounded. From the modern generation the RAZR V borrows a very thin profile, and strong build quality, great materials and overall classy workmanship.

Overall there are really very few external features of the RAZR V to go into. There’s the usual volume rocker on the right-hand side of the device, while on the left-hand side sits the phone’s microSD and SIM card slots. The back houses the RAZR V’s camera, flash and microphone in the usual spots, while the top holds a 3.5mm headphone socket, the on/off button and the normal microUSB input for charging and synching the phone with a PC.

Overall, we liked the design of the RAZR V. It won’t stand out in a crowded room, but excellent build quality, a classy overall feel and a very comfortable position in the hand mean this is a smartphone your digits will enjoy using and your eyes won’t get easily tired of.

Features
Like many competing models launching this year, the RAZR V runs version 4.0 (Ice Cream Sandwich) of Google’s Android operating system, which has only recently been superceded by the Jelly Bean version of Android. The smartphone features a 4.3″ touchscreen at a resolution of 540×960 pixels and is encased in KEVLAR fibre for extra toughness.

Inside, it is powered by a dual-core 1.2GHz processor and 1GB of memory. It comes with an 8 megapixel camera capable of 1080p HD video capture and a VGA front-facing camera. 8GB of on-board storage space is provided and the RAZR V also comes with a microSD card slot. Its battery is a 1780mAH model. However, it does not support the 4G speeds available through Telstra’s 4G network and shortly to be available through Optus’ new 4G network.

Overall, when you examine the RAZR V’s featureset, you’re forced to conclude that it has solid, but not stand-out features. You can get a much better CPU, for example, on Samsung’s Galaxy S III; a comparably rated camera on virtually any high-end smartphone at the moment, a larger touchscreen on the HTC One X and support for 4G network speeds on the One XL. And you can get Jelly Bean on the Galaxy Nexus handset already.

The RAZR V ticks all the boxes for the specifications which you’d want on a high-end smartphone in mid-2012. But there’s nothing really here to get excited about. The RAZR V makes it over the line to be comparable with other top-end models on the market, but on paper at least, it doesn’t do anything to better them.

Performance
There are some lovely aspects to the RAZR V which Motorola has really done well here.

For starters, the phone’s user interface is just fun to browse around, courtesy of a few little UI tweaks which Motorola has layered on top of Android. One example is the way that the phone switches its screen off. When you hit its on/off button to send it to sleep, the RAZR V’s screen will imitate an old-style cathode ray tube television and shrink to a tiny pixel line before disappearing. It’s an endearing little touch which will generate interest from onlookers, and there’s quite a few other little touches like this in the RAZR V’s UI, ranging from the way its icons are displayed to movement animations.

In addition, we quite liked the RAZR V’s screen in general. It looks sharp and bright, and relative to its size and pixel resolution, all the fonts and other UI elements fit well, making it a pleasure to browse around the phone and test various things out. Sometimes Android phones can have slightly weird resolutions for the physical size of their screens, resulting in font jagginess and icons not sitting quite right. But the screen and the UI of the RAZR V go together very well.

Performance when loading applications was strong, utilising the RAZR V’s dual-core CPU, and everything we did was quite responsive. The camera took very good quality pictures, and we though the colour balance was a little better than we’ve seen on some HTC models, for example — getting a bit closer to that of the Apple iPhone 4S, which we broadly consider the gold standard when it comes to cameras on smartphones.

One aspect of the RAZR V which was a little concerning was its battery life. As with most high-end Android models (with the exception of the Galaxy S III, which seems to be very strong on battery life), if you leave the RAZR V on your desk for several days it’s liable to start beeping at you for a charge, and heavy mobile Internet users are likely to need to recharge it every day and a half or so. This isn’t ideal — and if you need stellar battery life we’d recommend you look at the Apple iPhone 4S, the Galaxy S III or even a Nokia Lumia model instead — but the RAZR V’s battery life isn’t terrible either. It’s basically middle of the road for a high-end Android phone in 2012.

The RAZR V has launched in Australia as an exclusive through Optus, so it comes bundled with a few Optus in-house apps, but we didn’t find that they got in the way or were objectionable. They may provide a bit of additional functionality if you like that kind of stuff (who are we to judge?).

Conclusion
To be honest, we really liked the RAZR V. It’s got all of the specifications most people want in a modern smartphone, it’s got a nice design which sits well in the hand, a nice and responsive touchscreen, and it doesn’t come with a lot of bundled bloatware like some other models do. This is a classy, well-built smartphone which is a credit to its manufacturer.

But would we buy one for ourselves? Probably not.

The difficulty for the RAZR V is that it does what it does very well, but it doesn’t do anything to differentiate it from the pack of similar Android smartphones released in mid-2012. It doesn’t have 4G speeds, Jelly Bean, an amazing camera, a huge touchscreen, stellar battery life or anything else which would attract people to buy it instead of a Samsung Galaxy S III, for example, or an Apple iPhone 4S, or one of HTC’s One series models. And all of those smartphones offer differentiating factors compared with the RAZR V.

One factor which the RAZR V does have is its price. It’s selling for $4 a month on a $35 monthly plan from Optus — making it one of the cheaper high-end Android smartphones available in Australia. Mobicity doesn’t appear to stock the phone, but it does have the very similarly specced RAZR MAXX for $499 and the fairly similar RAZR Spyder for $379.

The smartphone which is most similar to the RAZR V is Huawei’s Ascend P1, which goes for $499 outright. The two phones share a lot of specifications, but we’d say the RAZR V likely comes out on top in the end due to superior build quality and software integration. Plus, you can get it on a plan; the Ascend P1 only sells outright.

To sum up: If you’re looking for a cheaper smartphone with very strong build quality which is just a step down from the hyped absolutely top-end models, we recommend you give the RAZR V a strong look. It’s a very good and affordbale smartphone which is only hampered by the fact that it doesn’t stand out from the pack. But for quite a lot of people, that might be just what they’re looking for.