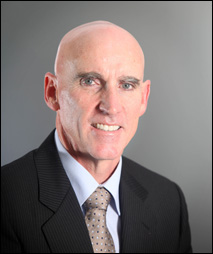 NBN Co chief executive Mike Quigley has again expressed his frustration with what he described as the “futile” ongoing debate about whether wireless technologies would make the mainly fibre-based National Broadband Network obsolete, arguing that both fixed and wireless technologies will be needed in the nation’s future.

The debate flared up again over the past few weeks as the United States Government committed to a wireless-based national broadband network and locally, Telstra revealed it would bring the Long-Term Evolution mobile broadband standard to Australia, in a move which will boost wireless speeds dramatically. A number of households already prefer wireless against fixed-line broadband for reasons including the flexibility of relocating a service.

However, Quigley told a Senate Estimates Committee hearing tonight that there was a great deal of “misinformation circulating in some sections of the media” about the potential for wireless to make fixed-line broadband obselete.

“The fact is they are complementary,” he said, pointing out that both 802.11 Wi-Fi and 3G or LTE mobile broadband services required fixed broadband links backing them to be effective. “Mobile networks alone will not provide all of the telecommunications [services] that Australians will need in the years ahead,” he said, noting there was much “ill-informed” commentary on the matter.

For starters, he said, he had spoken to Randall Stephenson, chief executive of giant American telco AT&T, who had described a situation where the same mobile base station could be taken out to Western Texas and to downtown Manhattan, and get two extremely different results due to the different population densities — 20Mbps in the first case, and 2Mbps to 3Mbps in the latter.

“LTE will be the same thing,” Quigley quoted Stephenson as saying. The difference occurs because mobile broadband networks share their network capacity between users — whereas fixed fibre networks such as the NBN substantially do not. Quigley also quoted Telstra chief technology officer Hugh Bradlow as saying that Australia couldn’t wait another eight years for fixed networks to be upgraded.

And the NBN Co chief also picked up a quote from a media outlet which Communications Minister Stephen Conroy has attacked publicly as being too harsh on the National Broadband Network project — the Australian newspaper — prompting Conroy to start up from his seat and say “What?! No!”

Quigley pointed out that in an article in The Australian this morning, Telstra director of network and commercial planning Anthony Goonan had stated that LTE would be fine for moderate use, but would not necessarily be suitable for “heavy duty bandwidth applications”; Telstra would need to use quality of service technologies to deliver such applications through wireless.

International telcos such as British Telecom and France Telecom were “amused” about the wireless versus fixed debate happening in Australia, Quigley said — because of the complementary nature of the two types of technologies.

“I do hope that now this rather futile debate will come to an end,” he said.