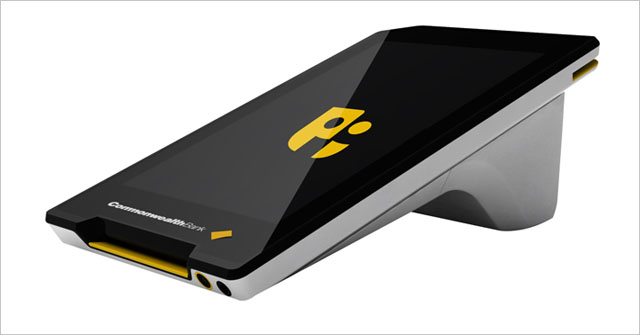 news The Commonwealth Bank of Australia this morning revealed several devices and an application development platform that together constitute an ecosystem similar to the Square mobile payments system which is becoming popular in the US for transactions at merchants such as retailers, restaurants and cafes.

According to a media release issued by the bank this morning, there are several pieces to the puzzle, which it hopes will “revolutionise” the point of sale experience for Australian consumers. The first and most obvious piece is Albert (pictured above), a new mobile payments terminal which uses an underlying platform based on Google’s Android operating system. The device features a 7″ touchscreen, a PIN keypad interface, a paper printer and merchant terminal functionality similar to today’s existing EFTPOS terminals.

Secondly, CommBank has also developed another hardware system which it calls Leo. Leo attaches to Apple iPod Touch, iPhone 4 and iPhone 4S devices to transform them into “a fully functioning merchant terminal”. It is this functionality which Square is famous for providing in the US. CommBank has previously used Ingenico hardware for its Kaching! consumer mobile payments solution, which adds an NFC chip to the same Apple smartphones through a surrounding case.

CommBank also this morning unveiled a software platform which it said would run on the Albert, dubbed ‘Pi’, as well as an application ecosystem, AppBank. The bank said that applications could easily be created for use by merchants on their Albert or Leo systems and distributed through AppBank. The Pi and Albert platforms were developed with the assistance of banking technology vendor Wincor Nixdor and design house IDEO. You can watch a video demonstrating the whole lot here.

“Pi, together with Albert, will empower businesses to go beyond a simple transaction by using consumer-friendly applications and a human-centric interface to enrich the customer experience,” said Kelly Bayer Rosmarin, Executive General Manager of Corporate Banking Solutions, Commonwealth Bank. “From offering an easier way of splitting the bill, activating a loyalty program, using information on customer preferences, to offering a more personalised experience or checking stock – with Pi, the opportunities are limitless.”

“We know businesses want to have richer relationships with their customers but have felt restricted in the ways they can do so. Pi will help break down these barriers, having been designed from the ground-up and based on actual business feedback to deliver a solution that will revolutionise the customer experience. Interactions between businesses and their customers will never be the same again,” the executive added.

“CommBank is committed to providing game-changing, human-centric innovations for our customers and we believe Pi firmly delivers on this commitment. We look forward to continuing to work with our business partners and welcoming new developers on board as we work towards general availability and rollout of Albert in 2013.”

Albert will commence its certification this year, with expected general availability, depending on the time taken for final certification, in the second quarter of 2013. Leo is currently being piloted and will be available to other businesses in August. Apps developed for CommBank’s platform will be subject to approval by the bank, with Pi being available immediately for developers to begin working with.

One example of an application given by CommBank was the ability to split bills at a restaurant through the Albert platform.

The main rivals for CommBank’s new ecosystem are likely to be the existing EFTPOS system, which is ubiquitous throughout Australia but limited in its application, and Square, which announced in June that its technology had been adopted by over two million individuals and businesses throughout the US. However, Square has not yet launched in Australia, as it has remained focused on its home market of the US.

Square’s Card Reader plugs into the headphone jack of an iPhone, iPad, or Android device and allows for credit card payments through the free, downloadable Square Card Reader and Square Register apps. Square charges a rate of 2.75% per swipe, and Square merchants have access to their funds the next business day.

opinion/analysis
Wow. Suddenly CommBank has an Android-based intelligent EFTPOS-style terminal. Suddenly it has hardware devices which plug into an Apple device, just like Square. Suddenly, it has a whole operating system and app ecosystem which it wants third-party developers to tap into. Maybe CommBank is actually serious about its future competitors being Apple and Google.

So what do we make of all of this? After thinking about it for a while, I want to make three points about what the bank announced today.

Firstly and most obviously, this whole initiative by CommBank is a colossal attempt to lock in retail merchants all around Australia to using its banking platform for the foreseeable future. The bank didn’t say as much this morning, but I’m betting you won’t be able to use Albert, Leo, Pi or anything else unless you’re a CommBank banking customer. You won’t be able to take this platform with you if you become a customer of ANZ Bank, for example.

However, as most of Australia’s retail merchants are already locked into this kind of deal — with existing bank-branded EFTPOS terminals, they likely won’t see this as a big deal. Most will see it as CommBank upgrading its existing fleet, rather than a radical new revolutionary move etc.

Secondly, I predict the bank’s attempt to get third-party software developers interested in developing their own apps for Pi will broadly fail. CommBank is not a major software vendor like Microsoft, and it has no experience in working with third-party software developers. Those who do choose to work with the bank will likely find it to be inflexible, overly bureaucratic and a stickler for the rules. Every bank is.

As for the initiative as a whole … I think that it’s too early to call whether it will fail or not. In the US, Square has pioneered great change in mobile payments for retailers, and the CommBank is clearly attempting to steal a march on this invader by copying its model and launching in Australia before Square or someone else can.

But Square’s own future — and the future of the whole mobile payments industry — is very much up in the air right now. In the mix are the other banks, the EFTPOS organisation, the credit card companies VISA and Mastercard, the regulators such as APRA and even companies like Apple and Google. I don’t know whether anyone really wants CommBank to be disrupting this ecosystem, apart from CommBank itself. Certainly I haven’t seen any real demand for the “revolutionary” new products it launched this morning.

Right now, CommBank is doing the right thing in attempting to innovate in Australia’s banking system, especially when it comes to payments. However, to me all of the bank’s initiatives have so far felt very much like the sorts of product launches we’ve seen from book publishers, newspapers and record labels over the past few years.

All of these organisations tried hard to build new technology models to shift their business into a new digital environment, and all of them broadly failed. And they failed because they are not technology companies and they don’t understand technology. It took actual technology companies — Apple, Google, Amazon — to succeed in evolving their models.

I think the same will eventually prove true of banking. Despite the Commonwealth Bank’s best efforts, I suspect that nobody really wants their bank to be a technology vendor. But in a few years’ time, what we may find is that a few technology vendors may do a better job of providing for our future banking needs than the banks ever could.