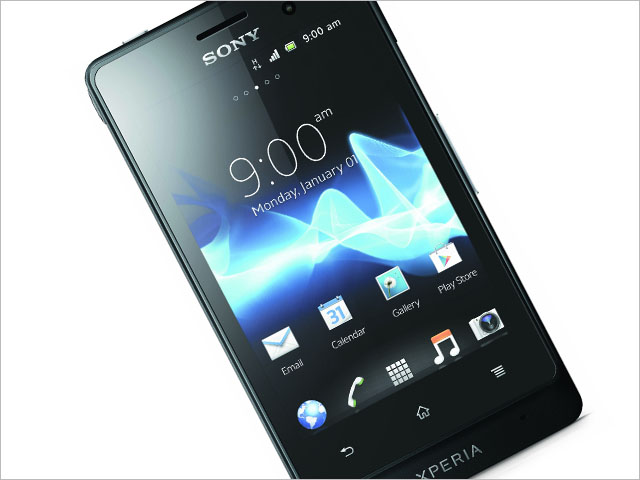 review Not everyone needs the latest and greatest, high-end big screen smartphone. Some people want something that’ll handle their active lifestyle, including exercise out there in the elements. Is water, dust and dirt a problem? This may be the handset for you. But can the Xperia go handle what buyers will doubtless throw at it? Read on to find out.

Design
If you came to the Xperia go without considering its underlying purpose as a ruggedised phone suitable for exercising outside with, you’d probably feel initially like it was a throwback to 2005. This is truly a minimalist model.

The first thing you’ll notice when picking up the device is that its screen is on the small end of the scale. It’s just 3.5″, and while this is the same size as Apple’s iPhone line-up prior to the iPhone 5, the fact is that we’re in a new, 4.x” reality for most smartphones in 2012 and heading into 2013, and the Xperia go just feels small and contained — especially for an Android phone, which tend to be larger than the iPhone as a general rule.

The second thing you’ll notice about the Xperia go is its roughened, sandpaperish plastic finish. It’s very grippy — including when the phone is wet — but this finish also really makes this handset feel like it’s a toughened instrument. Think of the difference between your running shorts and dress shorts you might wear to a hot summer night’s date in Singapore. They’re both shorts, but one of those items is clearly designed for the outdoors and one for casual-wear. That’s the feeling you’ll get when fondling the Xperia go. It feels ruggedised for the outdoors.

Apart from these two factors, there really isn’t a whole lot to talk about with the Xperia go. It has relatively few ports compared with higher-end models — just a 3.5mm audio jack, a microUSB input for charging and the usual array of on-switches and volume rockers — and those that are there are covered with a little plastic insert to stop water getting in. The phone weighs 110g, which is quite light, and it’s 111 by 60.3 by 9.8 mm.

Features
The hero features of the Xperia go aren’t related so much to its actual specifications, but more to its design. With only a 3.5″ screen, a mid-range five megapixel camera, a 1GHz dual-core processor and Android 2.3 (‘Gingerbread’, two releases behind now), there really is no way that the Xperia go’s going to win any smartphone speed races. It also doesn’t do 4G mobile speeds, and its battery is a moderate model supporting between 1,265 and 1,305 mAh. Some readers will be happy to know that it does take a microSD card, although you have to take the back cover off to get to it.

However, what the Xperia go does have is what Sony says is the highest industry level of dust and water resistance possible in a smartphone. What this means is that the Xperia go is rated at IP67, which means it is “protected against dust and the effects of immersion between 15cm and 1 mere for 30 minutes”.

We didn’t go for the whole immersion, but we did splash water and beach sand (separately) on the Xperia go, and it didn’t miss a beat or retain much of the foreign substances. And it cleaned up real nice with a few wipes. If you want to see how the Xperia go does perform when dunked in an actual bowl of water, we recommend you check out this video by Gizmodo, which shows the smartphone continue to function perfectly normally in a fishbowl. The other thing the Xperia go will do is continue to function in terms of its touchscreen finger recognition when it’s wet. And it also comes with a few dedicated fitness apps such as FigureRunning, miCoach and Walk Mate.

Performance
To be honest, the most defining aspect of the Xperia Go’s performance is that its small screen, coupled with its underpowered operating system and bodgy third-party apps combined to make this model feel like the way smartphones used to be — not the way they are today.

The Xperia go is the first smartphone in a year or so to make us feel like it’s not a smartphone at all, but a previous generation model. You remember the old Nokia phones with Symbian for an operating system? For some reason, the Xperia go reminded us of those models.

If all you want to do is make calls, send texts, read your email (but not compose extensively), listen to music when you’re jogging and other basic tasks, then the Xperia go is powerful enough to do all of that. It’s also light, quite small, very, very durable and overall very functional. It’s extremely easy to imagine taking this smartphone with you jogging, hiking and so on — or indeed, for virtually any sport.

But it’s not the sort of device you want to consume rich media on, its camera is adequate but not high-end (there’s also no front-facing camera) and you won’t want to spend any real time using it for web browsing, creating content or other intensive tasks. The screen is too small and the icons sometimes hard to hit for those with relatively normal-sized fingers.

To sum up: The Xperia go does do very well what it’s been designed to do — withstand dirty and wet environments and lightly sit in the cramped pockets of sportswear — well. And it can do other things such as allow users to consume and create rich media. But it doesn’t do those extended features well — only adequately. The Xperia go has the guts to deliver a modern smartphone experience. But its focused design makes it less than ideal for the purpose. It’s better at doing the basics under extreme conditions than it is at carrying out more advanced functions.

Conclusions
You’re not going to turn any heads sporting the Sony Xperia go, and you’ll probably find using richer smartphone features fairly finicky on this model. But there is no doubt that this smartphone does what it was designed to — pack a full set of modern smartphone features into a light and ruggedised package — well. If you’re in the target market for this kind of gear, it’s definietly worth taking a look. It’s available through Optus, starting for nothing upfront on the company’s $30 monthly plan.

Other reviews of the Sony Xperia go which we liked: Gizmodo, CNET Australia.