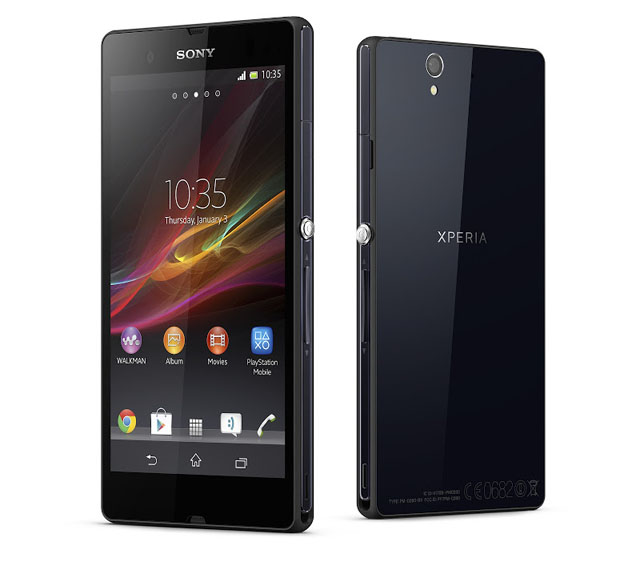 preview Sony’s last few entries in the high-end Android smartphone market have been a little tepid, with the company lacking a high-profile winner such as the Galaxy S III or the HTC One XL. Can the company’s new superphone, the Xperia Z, bring the magic back for Sony? Read on to find out.

Design
Sometimes we think smartphone design is all tending in the same direction recently, with the exception of a few standout lines such as the fluoro stylings of Nokia and HTC’s Windows Phone models and the more ‘natural’ colours and smooth shaps of Samsung’s Galaxy S III line. And the inspiration of that direction is pretty clear: It comes from Apple’s flagship iPhone line.

Like the iPhone 5, Sony’s Xperia Z is a flat, black (or white, if you choose, and it looks like there’s also going to be a purple option available) oblong with those rounded corners which Steve Jobs was so fond of. The main camera’s on the back at the top, there are volume buttons on the side, the Android buttons are below the large screen, yaddah yaddah yaddah. If you’ve played with a handful of Android phones over the past year, you know what to expect here.

Of course, there are a few different quirks about the Xperia Z’s design which are unusual. For starters, this is one of a soon-to-be long line of Android smartphones to launch in Australia which are built around a 5″ screen, sporting a 1080p HD resolution. This means the Xperia Z is slightly bigger than the 4.7″ and 4.8″ screens found on last year’s line-up of high-end Android smartphones, such as the aforementioned Galaxy S III and HTC One XL.

You would expect this to make the Xperia Z quite bulky, but from what we’ve seen of the handset it actually seems to fit quite well in the hand. Much of this comes down, we suspect, to its thinness — it’s only 7.9mm thick — very close to the iPhone 5, which is one of the thinnest smartphones on the market at 7.6mm. In addition, it appears as though Sony has taken the approach of keeping the smartphone’s width down as much as possible by pushing its touchscreen quite close to the edge of its physical casing. We like this approach a great deal — as it delivers a large screen with as minimal a physical footprint as possible. It also has a relatively middle-range weight (146g), despite its size.

Other aspects of the Xperia’s design which are notable include its aluminium on/off button on its side (apart from its size, this is one of the most visible cues that it’s not an iPhone) and the fact that it’s covered in glass on both its front and back, an approach which we recently liked in the Nexus 4 manufactured by LG in coalition with Google.

Overall, we really quite like the Xperia Z’s design. But don’t kid yourself — this isn’t a phone which will stand out from the crowd. It’s a flat black oblong like many of the rest.

Features
Its in its featureset which the Xperia Z really stands out from much of the competition currently available in Australia. As we’ve mentioned, it’s one of the first of a wave of smartphones to feature a full 5″, 1080p HD screen. This means a resolution of 1080×1980 (not dissimilar from many computer monitors) and a pixel density of about 441 PPI. This is simply incredible (remember, the iPhone 5’s ‘Retina Display’ only does 326 PPI). You definitely won’t be able to see individual pixels on this one, and we expect the quality of the Xperia Z’s display to be stunning.

Then there’s the Xperia Z’s camera. In the current generation of smartphones it’s common to see eight megapixel models as standard. The Xperia Z bumps this up to 13.1 megapixels. While HTC has recently given us reason to question the value of megapixel ratings (its new HTC One uses a lower rating in ‘ultrapixels’) and Nokia has also shown us that there can be dramatic differences between cameras even of the same megapixel rating, we do expect the Xperia Z’s camera to feature very solid quality courtesy of this rating.

On all other areas the Xperia Z also looks industry-leading (at least for now). It supports 4G speeds with Telstra and Optus (as well as Vodafone when the big V eventually launches its 4G network this year), its processor is a quad-core 1.5GHz ‘Krait’ model coupled with a Adreno 320 graphics processor, it comes with a front-facing camera of 2.2 megapixels that can shoot video at 1080p at 30fps, and it has 2GB of RAM, 16GB of on-board storage and the option to add a microSD card for an extra 32GB of storage. The Xperia Z comes with Android 4.1.2 (‘Jelly Bean’), but it will be upgradeable to the excellent version 4.2.

Plus, there’s one other huge feature which many people will no doubt be interested in. The Xperia Z’s ports are protected behind special flaps designed to protect the phone from water. This and other design features mean the Xperia Z is rated to the IP55 and IP57 water and dust resistance standards, and can be submerged in up to a meter of water for 30 minutes at a time. Similarly, its screen comes with wet finger tracking technology to aid when its wet.

Let’s just state it right out: The Xperia Z’s featureset is top-class. This is a phone which, on paper at least, will very likely kick it with the big boys set to be released this year.

Performance
It’s very hard to tell how solid a smartphone is without actually testing it, and we’re reserving judgement on the Xperia Z for the moment until we can get a review unit into the office. Sony hasn’t had a really high-end smartphone for a while now, and while other Sony units we’ve tested have been relatively good, the company’s Android implementation and build quality has generally lagged behind those of other manufacturers. For a while now we’ve considered Sony a bit of an Android also-ran.

However, early reviews of the Xperia Z have been relatively solid. Engadget praised what it said was “a concerted effort to make a premium phone”, and backed Sony for including water-proofing, but noted the Xperia Z already faced a great deal of competition in the smartphone market and was about to face more. CNET UK broadly agreed, writing:

“The Sony Xperia Z combines looks, power and connectivity to supply one of the most impressive Android experiences we’ve seen in quite some time. The lack of Android 4.2 at launch is unfortunate and that 5-inch screen isn’t going to suit everyone, but there’s little room for complaint elsewhere. This is easily Sony’s best phone yet, and one of the best Android phones ever released.”

And Australia’s own Ausdroid noted that it would recommend the Xperia Z, but probably on a plan from a carrier to keep the price down. The site also noted that the model was the best Sony handset its review had used.

Conclusion
Based on what we’ve seen so far, the Xperia Z looks like a very solid Android phone, and we expect it to do moderately well in Australia, and certainly better than Sony has done with previous models in the local market. This looks to be a high-end model done well, and will be a credit to Sony’s venerable name.

However, we also suspect that the Xperia Z is going to get a little lost in the crowd. Basically everyone we know that is a high-end Android user is already looking forward to Samsung’s planned Galaxy S IV launch in March, and HTC just got done launching its new One flagship model, which again, looks like it may pip the Xperia Z at the post. For the wider market, we’ll also likely hear more and more about a new iPhone later this year, and the corporate market will no doubt continue show great interest in the Nokia Windows Phones that are finding their way into so many corporate fleets.

The Xperia Z looks to be a great handset … but in 2013, with so many other great options out there, will this be enough? We’ll have to wait and see, but at this stage we suspect Sony will only achieve moderate success with this model in Australia. Better than it has been — but probably nowhere near the success we expect to see from the likes of Samsung and Apple.

The Xperia Z will be available in March from Sony online for $749, and on carrier plans through Telstra, Optus and Vodafone.