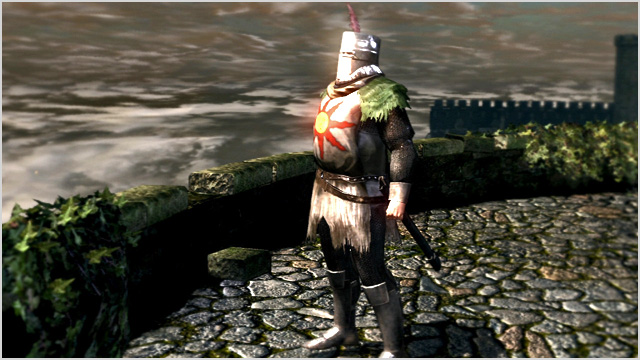 musing In the critically acclaimed video game Dark Souls, there is a mysterious character known as Solaire of Astora who has developed something of a global cult following.

The world of Dark Souls is a dark and tortured one, filled with undead zombies, hideous and powerful demons, fallen gods and the decaying ruins of a broken medieval civilisation. The humans that remain in it are often highly cynical creatures; tied by fate to an endless cycle of death and resurrection and grown weary of the abominations which they must constantly fight, before eventually losing their own humanity and taking their place amongst the monsters.

In this context, Solaire’s presence in the game is incredibly incongruous.

You first meet Solaire after you have vanquished one of the game’s earliest bosses. Dark Souls is not an easy game; in fact, by modern video gaming standards, it is usually described as one of the hardest to be published over the past several years. And so it is that when you encounter this mysterious knight for the first time, it is with a great sense of accomplishment, as you have survived the game’s tough first few hours. As if in reward for your courage and perseverance, when you encounter Solaire, he is standing on the ramparts of the ancient medieval castle which you have just fought your way up to, gazing fixedly at an incredible sunset in the distance, the sun’s golden rays piercing the clouds and basking the countryside below in a warm yellow light.

Clothed in strong armour bearing the emblem of the sun, Solaire welcomes you and informs you that he is an adherent of one of Dark Souls’ Gods, the Lord of Sunlight. He has journeyed to what he describes as “this great land”, to seek his very own sun. The player is able to strike a bargain with Solaire, which will see the knight provide assistance during various hard stages of the game, as this mysterious figure puts it, engaging in “jolly cooperation”. “I will stay behind, to gaze at the sun,” he tells the player as you leave his presence. “The sun is a wondrous body. Like a magnificent father! If only I could be so grossly incandescent!”

As I played through Dark Souls and enlisted the assistance of this white knight in a land of darkness, I couldn’t help but feel an intense sense of gratitude towards him. In such a dark and troubled land, how could one individual feature such positivity and bravery, with courageousness almost verging on the foolish? How, when everything around him is filled with death and decay, could Solaire maintain such a focus on the warm light of the sun?

And it appeared others felt the same way.

Dark Souls has a unique multiplayer feature that allows players to either cooperate or hinder the efforts of other players via the Internet. If you choose to do so, you can invade other players’ single player games, and punish them for their sins. Or, you can assist them by helping them fight bosses or leaving them cryptic messages enscribed into the ground with a special chalk-like item.

Yet many players chose a more whimsical approach.

As I journeyed deep into the decaying Dark Souls world, I would sporadically come across a vista of unsurpassed beauty, with the bright light of the sun shining like a warm beacon down upon the ruined fortresses and foetid gardens of the game’s landscape. Almost universally, I would find enscribed at my feet a single, cryptic multiplayer message: “Praise the Sun”.

These three words were enough to remind me that in countless other loungerooms across the Earth, hundreds of thousands if not millions of players were going through the same titanic struggle to conquer the demons of Dark Souls as I was. Each of them was also enmeshed in the same journey; beset on all sides by the same countless foes; fighting to conquer their weaknesses as players and develop their character to become more than what they were before

Dark Souls players know virtually nothing of each other; but through the avenue of the game’s multiplayer message, we were able to share a common vision of hope and courage amongst such treacherous times; as represented by the mysterious Knight Solaire and his admiration for the sun. Every time I would beat a new challenge, the message would be there; every time a boss would fall by my sword, I would read those same words.

During this process, which ultimately resulted in my discovery of many of the secret truths of the world of Dark Souls, including much about Solaire of Astora himself, I came to question greater truths about our lives as humans.

Because there is much that this metaphor can teach us. Just as in Dark Souls, most of us spend our days in our own worlds, working, spending time with our families, pursuing our hobbies and so on. And just as in Dark Souls, we largely do so in a solitary manner. We may know the mechanics of a colleague’s work life, for example, and we may collaborate with them frequently on more difficult tasks, but how much do we really know about what challenges they face in their own heads, or in their personal lives? Anyone who has teenagers can probably sympathise with the idea that we may not even know as much as we think we do about our own closest family members.

And yet there are very often signposts within our lives which lead us to suspect that others are going through exactly the same experience. That look of shared mutual understanding between colleagues forced to endure a manager’s lack of understanding during a team meeting. A moment of agreement between men clustered around a pub table about the difficulties of domestic life, or the similar tales told at mother’s groups about the 3AM breast feed which their newborns demand nightly.

These are only small events — yet, as in Dark Souls with the finding of etchings exhorting you to ‘praise the sun’ — they are important moments which encourage us to remember that despite the fact that all humans are essentially alone in our own heads, we still go through many of the same challenges as those around us, and knowledge of that shared struggle can give us the strength to continue.

And so it is that several weeks ago, walking down through the University of New South Wales’ Kensington Campus, I came across a wondrous vista, featuring the institution’s majestic buildings coloured a warm yellow by the glorious rays of a beneficent sunset, with clouds streaking off in all directions and a positive feeling in the air. I have to tell you, I was sorely tempted to buy some chalk and write an encouraging phrase at my feet, to remind those around me that, as the Desiderata tells us, with all its shams, drudgery and broken dreams, it is still a beautiful world.