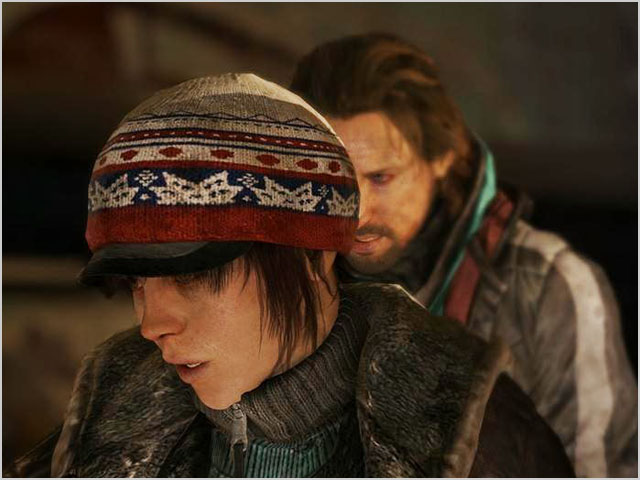 review Jodie is a lonely little girl, incredibly bored in the middle of winter. Her mother suggests she go outside and play, though she’s not allowed out of the yard. But she sneaks through the fence to join a group of kids in a snowball fight.

It’s all play at first, but then the spirit that is linked to Jodie by an invisible chain becomes protective over the percieved violence of the kids throwing objects at one another. He attacks one of the children. Horrified by being attacked by a “witch” the kids grow angry and hostile, and after her parents rescue Jodie, they decide to commit her to a institution where friendly scientists can get to the bottom of what is happening and hopefully “cure” her.

The scientists are earnest in their desire to help, but to Jodie it’s a prison, and her experience there sets her on a path that takes her to some truly horrible places. Beyond: Two Souls isn’t a nice game and it goes to great lengths to expose the very worst that can happen to a human being. It deals with some pretty dark themes in some quite dark ways. It’s also one of the richest narratives that have been worked into a game to date, and it’s a bold attempt to look at ways in which games can be worth more than racking up a headshot total or going on consequence-free crime sprees through virtual cities.

David Cage’s newest work picks up his unique approach to storytelling at about the same point that Heavy Rain left off. People need to know going in that it’s barely interactive and closer to a choose-your-own-adventure novel where players make the occasional important decision but are tied to a single narrative progression.

People have criticised this approach to game design in Heavy Rain, and they will criticise it in Beyond: Two Souls. These people are typically looking at the game through the wrong lens. Most games test players physically, demanding of them fast reflexes and accurate hand-eye co-ordination, but Cage wants to test players intellectually and morally, asking them challenging philosophical questions with no easy answer. Other games test players strategically, pitting them in an environment where success depends on a player’s ability to utilise resources to maximum effect, and failing to do that also means a ‘game over’. But Cage’s game requires players to finish it to understand it, and he wants you to understand it. It’s nearly impossible to fail at Beyond, but it hardly matters because Cage’s game isn’t about success or failure. To judge it by conventional game standards is to misjudge it completely.

So why make Beyond: Two Souls a game at all? Why not make it an animated movie? While it’s undeniably cinematic, Cage has worked with the tools at his disposal to produce an experience that is intense beyond what a conventional film can achieve. As players progress through the game they’re asked to complete button inputs to progress the scene further. These are often mundane; one scene overlays button presses as Jodie plays with her dolls, for instance. Another example is twisting left and right on the bed while trying unsuccessfully to sleep – these are such mundane behaviours that most other games would not bother asking players to participate in that action.

So why does Cage? Because these mundane activities create an intense connection between the player and Jodie. Where a film is a passive experience where any emotional weight occurs despite the medium, games are an interactive, active experience that allows players to form an intense bond with the on-screen actors. They do, after all, become extensions of a player’s will.

Cage knows this, and he plays around with it a lot in Beyond. From drawing players into Jodie’s plight by making her every action accountable to their input, to cleverly pulling players out of Jodie’s body by forcing them to watch certain scenes from the perspective of her spirit companion, Aiden, there’s a constant focus on what is going on around Jodie and how it affects here that is singular and quite intense. This game needed a great actor to hold down a such a role when it was going to end up being scrutinised so closely by anyone who played it. Thankfully, Cage found Ellen Page and she does the job brilliantly.

The story itself is so simple that it’s something everyone can connect to. At its core, underneath the crazy ghost meta-narrative, Beyond is a story about a person yearning for acceptance, but finding it difficult to find her place in the world. We’ve all felt like the outsider at some stage in our lives, and when we are in control of Jodie’s movements we are made to feel like an outsider again. Then, when we’re forced to watch Jodie’s struggles as Aiden, it’s like we’re watching ourselves through a mirror. It’s intense, and highly reflective. I’m on my second play though now and I have found it difficult to make different decisions at key points, despite wanting to experience a different narrative, because it’s hard to choose decisions that I wouldn’t personally make were I in the same position.

The game itself is temporally structured in a non-linear fashion – one moment we’re controlling adult Jodie, the next we’re back in the hospital room as child Jodie. This allows Cage to create a narrative that remains mysterious throughout, and allows him to focus on snapshots of Jodie’s life for maximum emotional effect. While player actions are often mundane, there isn’t a single scene in the game that doesn’t have have a major emotional impact, and the game can be exhausting to play.

As each scene is self contained with its own three-act narrative, running through an especially long action sequence (an endless supply of quick time events in terms of interactivity), and then trying to play through a quieter, more reflective scene is difficult. Not because I was in any way bored, but simply because I was drained from the previous events.

For the most part everything comes together and Beyond is a masterfully written narrative, but there are moments where it’s easy to see that this style of storytelling is so new that Cage struggled with executing it. Some scenes don’t work as well as others – for instance one early scene takes place at a teenage party, where Jodie meets a boy for the first time, then progresses to slow dancing with him, kissing him, and then having him attack her character and locking her as a “witch” under the stairs within the span of 10 minutes of play time. Another scene later on finds Jodie at a farm where she experiences a day’s work, except the full day involved moving a pail of water, a bail of hay, having lunch, and then herding a horse back into its stable.

Because the game works so hard for realism, these moments where the passage of time is abstracted become hard to get along with. Cage is at his best when he can dwell on a scene to a realistic length of real time, and these moments are the real highlights. There’s about ten hours involved in each play through of Beyond, but you can’t help but wonder if the overall strength of the narrative would be better off with one or two scenes stretched just that little bit longer, or removed entirely.

On a technical level Beyond is, of course, spectacular. Some of the most advanced animation capture imaginable went into producing these 3D character models, and it does show. Characters look like incredibly precise replicas of the actors, and move convincingly. Motion capture still has a way to go before it can do faces just right, but it’s getting dangerously close to the uncanny valley now. The cinematic quality of the game is also enhanced greatly by an inspired score by Lorne Balfe. This is by far his finest work.

Whether Beyond is the kind of game that you would like to play a lot of or not is largely irrelevant to the objective quality of Cage’s work. In terms of storytelling and technical execution there isn’t anything out there better, and the fact that it is a different, more thoughtful experience than anything else produced by a major studio means it is worth experiencing.