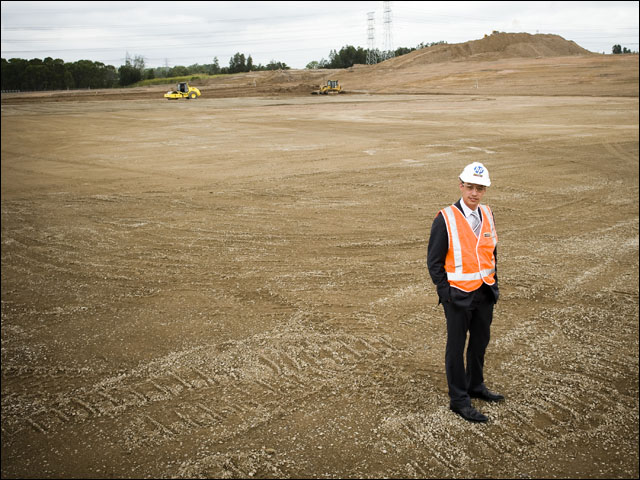 news Global technology giant HP has finished building its colossal $119 million new datacentre in Western Sydney and will launch the “world-class” facility next month, with a speech slated to be given by Communications Minister Stephen Conroy.

Details of the facility were revealed in February 2011. At the time, HP South-Pacific Vice President of Enterprise Services, David Caspari (pictured above at the site after it was levelled), said the new datacentre would respond to the growing demand for services that businesses and government face from their customers and communities. The project will involve a building cost of $119 million and is part of HP’s US$1 billion transformation to retire legacy assets and build new facilities. The new facility will occupy an area of more than 130,000 square metres and was previously expected to be fully operational by the end of 2011.

In a press invitation today, HP invited journalists to “the grand opening” of the datacentre in mid-June. “You will have an opportunity to tour the world-class facility and learn first-hand about how this datacentre will help HP Enterprise Services drive transformation and modernisation for organisations in Australia,” the invitation reads. “There will be an address from Senator The Hon. Stephen Conroy, Minister for Broadband, Communications and the Digital Economy.”

Due to the “high security requirements” of the datacentre, cameras and smartphones will not be allowed inside the facility on the day, although HP is planning a “photo opportunity” with Conroy, and is planning to supply its own photography of the facility.

In February 2011 when the facility was first unveiled, Caspari said HP’s next generation datacentre significantly expanded HP’s and Australia’s infrastructure capabilities, enabling local enterprise to transform their system into a more flexible and modernised “everything as a service” environment, reducing both costs and risks, while driving predictability.

The HP chef added the rollout of the NBN would enable an increasing number of organisations to adopt new IT delivery models. He said cloud computing services would take off in the near future and that delivery models would be about connecting users to the services they want.

Paul Brandling, Vice President and Managing Director of HP South Pacific, said the investment was driven by recent shifts in the use of technologies — including in telecommunications — which created an environment of media and IT convergence to which Australian organisations and institutions needed to adapt. “Investment in IT infrastructures — such as this and such as the NBN — are as critical to the economy as traditional investments in things like water, power and transport,” Brandling said at the time.

Conroy joined a HP press conference at the time to congratulate the company on the new datacentre. He said HP was making a significant investment that would further drive Australia’s participation in the digital economy, as in the next four years — Senator Conroy said — more data would be produced than in the whole of history.

opinion/analysis
Given the massive cutbacks HP is undertaking globally, its Australian management team is lucky to have gotten this project across the line when it did. It represents a huge investment in Australian infrastructure, and I anticipate HP will be successful in attracting many large customers inside its walls. I applaud the company’s investment in Australian infrastructure and wish it well at the launch, and as things get ‘bedded down’ in the datacentre’s operations over the next little while. Congratulations, HP! Some more photos of the huge site prior to construction starting: