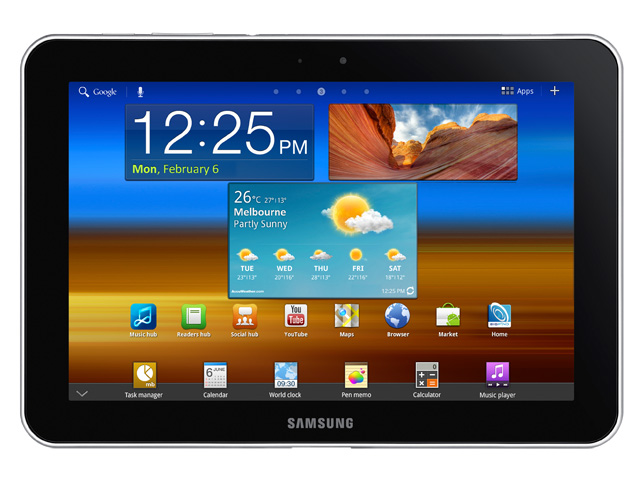 review Pick up Samsung’s sleek Android-powered Galaxy Tab 8.9 4G and you can see what Apple is afraid of.

Design
The little sister of the Samsung Galaxy Tab 10.1, the latest Galaxy Tab is a delight to hold — with the 8.9-inch display striking the perfect balance between usability and portability. The tablet is only 8.6 mm thick and tips the scales at 458g, so it sits comfortably in your hands and slides easily into a travel bag.

The black bezel, with silver trim and rounded edges, certainly looks the part but helps drive the inevitable iPad comparisons. This tablet is thinner and lighter than the iPad 3. That’s not really a fair comparison considering the iPad 3 has a larger 9.7-inch display, but losing less than an inch doesn’t impinge on this tablet’s usability.

Fire up the Samsung tablet and you’re treated to a bright, crisp 1280×800 TFT PLS display, which is sharper than the iPad 2 but still falls far short of the iPad 3’s retina display. The colours aren’t as vivid as the AMOLED displays found on many Android devices, but they’re certainly not washed out. Thankfully you avoid AMOLED’s trademark blue tinge and the display’s very white whites help combat outdoor glare.

Performance
The Galaxy Tab 8.9 4G’s claim to fame is access to Telstra’s new super-fast LTE mobile broadband network. We clocked an impressive 55 Mbps in the inner suburbs, but results varied greatly. Further from the city it fell back on Dual-Cell HSDPA and still clocked a respectable 13 Mbps. LTE is obviously the way of the future, but for now only people throwing around really big files (or tethering to a notebook) will see a noticeable speed boost over DC-HSDPA.

For now we wouldn’t buy this tablet just for its 4G access unless we worked and/or lived inside Telstra’s small 4G footprint and didn’t already have DC-HSDPA access. It’s worth noting the SGT 8.9 4G is a Telstra exclusive which only supports 3G at 850 and 2100 MHz. Unfortunately there’s no Wi-Fi only option, so outright pricing starts at a hefty $720 for the 16GB Wi-Fi/4G model.

Under the bonnet you’ll find a 1.5 GHz NVIDIA Tegra 2 dual-core processor accompanied by 1GB of RAM, which would seem impressive but only manages a Rightware Browsermark of 67,432 — respectable but lagging behind the SGT 10.1. We’ve read of much better results from the SGT 8.9 4G when running Android 3.1, so the Android 3.2 and associated bloatware could be factors.

Features
One key disappointment with the SGT 8.9 4G is that it runs Android 3.2 “Honeycomb” rather than the new Android 4.0 “Ice Cream Sandwich”. To be honest this is only likely to bother Android power users, who will probably root the tablet anyway and install a custom version of ICS without the bloatware. For now the tablet can feel a little sluggish at times, something ICS supposedly addresses.

An ICS update for the Samsung tablets is promised for later this year, offering interface improvements and other goodies such as improved voice recognition. For now this tablet stands out from the crowd thanks to Samsung’s TouchWiz tweaks such as the pop-up launcher for mini apps like the calendar and task manager. You’ve also access to Social Hub, Reader Hub and Music Hub which includes a subscription music service.

Software updates will come with time, but it’s the hardware limitations that will put some people off this tablet. You’ve got 16 or 32GB of onboard storage, but there’s no micro-HDMI and no micro-SD slot for expanding the storage and side-loading apps. You’re also missing a micro-USB port in favour of Samsung’s proprietary 30-pin connector. Thankfully you can get USB adaptors to cover these, which also activate the USB Host features so you can copy files from a USB stick. The Samsung Galaxy Tab 10.1 makes the same sacrifices and it could be enough to drive some shoppers to consider Android competitors.

Conclusion
The Samsung Galaxy Tab 8.9 4G is a thing of beauty which will delight those who care about design. Unfortunately in return you sacrifice a few connectivity options, while general performance is good but not great. The LTE speed boost is impressive, but with DC-HSDPA to fall back on we’d say there’s no rush to embrace LTE.