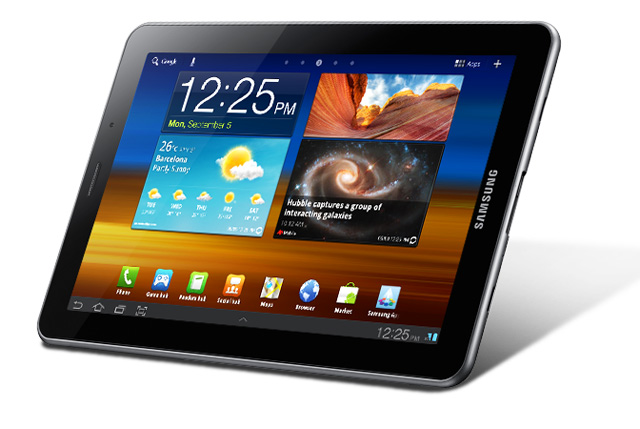 review After Apple’s announcement of the new iPad last week – and with Apple stores and other retailers around the country preparing for its sale this Friday – the last thing you probably want to read about right now is yet another Android tablet. But writing off Samsung’s latest family member prematurely would be a mistake. The Galaxy Tab 7.7 looks to be the company’s strongest tablet yet, with an appealing mix of good looks, strong specs and portable form factor. Is it good enough to wrestle even a little attention away from the almighty iPad? Read on to find out.

Design
Remember Samsung’s first tablet, the original 7” Galaxy Tab? The Tab 7.7 improves on it in almost every way. The somewhat tacky plastic body has been replaced with a stylish brushed metal enclosure, and it’s a lot thinner and lighter at 7.89mm and 340g respectively, making it far easier to grip one-handed. Obviously, you’ll still need two hands to use it given the tablet’s width, but the sleeker dimensions mean you’re more likely to grab it and go (and therefore use it more regularly) compared to a 10” tablet.

The Tab 7.7’s face is clean of any hardware or capacitive touch buttons – there’s just a Samsung logo on one of the shorter ends to suggest that its native orientation is portrait. Unlike other Honeycomb tablets, which feel weird when you hold them in portrait, the Tab 7.7 feels natural regardless of which way you hold it. Along the left-hand side you’ll find the microSD slot, while the right houses the power button and volume controls – all of which are a good size and easy to press. The top is home to the 3.5mm headphone jack, and the bottom features Samsung’s proprietary charge/sync connector (the same one found on other Samsung tablets) sandwiched between two speaker grills.

Features
The new iPad’s Retina Display may be all that everyone’s talking about at the moment, but the Galaxy Tab 7.7 deserves some recognition too. It’s the first tablet we’ve seen with any type of AMOLED display, let alone Samsung’s famous Super AMOLED Plus display technology (which we first saw on the Galaxy S II). There’s none of that PenTile Matrix goofiness that we’ve seen on “lesser” AMOLED displays – the Galaxy Tab 7.7 has the real deal of an RGB array, which means graphics and text are extremely sharp, and colours practically pop off the screen.

It’s not Retina Display sharp, mind you, but it’s sharp enough that text and icons look smoother than usual, and images show more detail, with a significant boost in contrast. It also has the same 1280×800 pixel resolution of the 10” Honeycomb tablets, and this gives it a high pixel density of 197ppi. That said, it has the same drawbacks of the screen on the Galaxy S II, namely green comes up over-saturated and unnatural-looking, and whites have a distinctly bluish cast, and become even bluer when you change the viewing angle of the screen.

Spec-wise, the Galaxy Tab 7.7 is quite similar to the smaller Galaxy Note. Both have 16GB of internal storage expandable by microSD, the same 1.4GHz Cortex A9 dual-core processor, a near-identical assortment of wireless technologies like 802.11n Wi-Fi, GPS, Bluetooth 3.0, DLNA and Wi-Fi Direct, and support for both HDMI output and USB host using optional adapters. Where they differ is 3G and the rear cameras. The local version of the Tab 7.7 doesn’t have 3G built-in (although this feature is available in overseas models), and the rear camera has been downgraded to a 3-megapixel camera – the same as the one on the Galaxy Tab 10.1.

Performance
We don’t have much to say about the Galaxy Tab 7.7’s performance that we haven’t said about other Android tablets a dozen times already. It has the same lag issues endemic to Honeycomb that we’ve seen from day one, and really, the update to Ice Cream Sandwich can’t come soon enough (assuming Google has worked out all the bugs and kinks by then). That said, the Galaxy Tab 7.7’s faster dual-core processor does give it a little extra oomph compared to what we’re used to, and despite the slight pause before it does anything, we were pleased with its overall responsiveness.

Web browsing in particular really flies on this thing – it returned a Rightware Browsermark score of 107,935, which is second only to the Asus Eee Pad Transformer Prime’s score of 109,925. The fact that the Transformer Prime has a quad-core processor whereas the Galaxy Tab 7.7 only has a dual-core processor suggests that Samsung has done quite a bit of back-end optimisation to the Tab’s browser.

Samsung is one of the few vendors that really pays attention to the multimedia performance of its mobile devices, and the Galaxy Tab 7.7 doesn’t disappoint. It supports a wide range of audio and video codecs out of the box (including the all-important DivX/XviD), and the stereo speakers are not only loud, they’re very detailed, and support virtual 5.1-channel surround sound through the external speakers. Combine that with the Galaxy Tab 7.7’s gorgeous Super AMOLED Plus screen and microSD expansion, and you’ve got a potent portable media player that beats the competition by a country yard.

Battery life is another area where the Galaxy Tab 7.7 excels. Despite its skinny profile, Samsung has managed to squeeze a huge 5,100mAh battery in, and we were able to get it playing standard definition videos on a loop for 12 hours straight.

Conclusion
iPad, schmiPad – there are lots of reasons to buy the Galaxy Tab 7.7 over the more popular Apple offering. The smaller form factor makes it easier to tote around, and you can even stick it in a jacket or cargo shorts pocket if you want to go bag-less. The screen is more vibrant than any other tablet display we’ve seen, and this really makes a difference when you’re viewing photos and watching videos. Speaking of videos, the excellent stereo speakers, beautiful screen, microSD expansion and out-of-box support for a wide range of video codecs make the Galaxy Tab 7.7 a far better tablet for video playback compared to the iPad 2, and you’ve also got the excellent battery life that sees it lasting longer than any other tablet we’ve tested so far.

We’re not saying the Galaxy Tab 7.7 is better than the iPad, just that there are lots of legitimate reasons why you may want to consider it, and that’s more than we can say for most other Android tablets on the market.

The Samsung Galaxy Tab 7.7 is available from select retailers for $543.