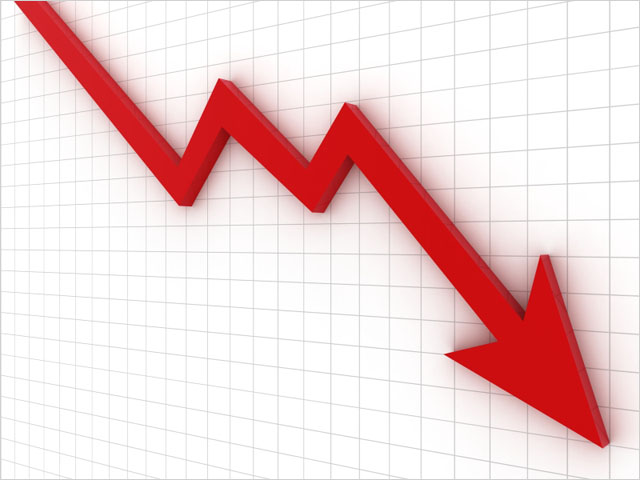 news The implementation of a limited Internet filter at Telstra has caused a dramatic and rapid drop in the numbers of attempts by the telco’s customers to access child abuse materials online, statistics released by the Australian Federal Police have shown.

In July last year, the telco, along with Optus and one other smaller ISP, CyberOne, implemented a filtering system which blocks their customers from accessing a list of sites which contain “worst of the worst” child pornography, as defined by international policing agency Interpol. Developed as a collaboration between the telcos, the Internet Industry Association and the Australian Federal Police, the project was seen as a more limited industry response to rival the Federal Government’s controversial mandatory Internet filtering scheme, which covers a much wider range of content.

It has previously been reported (in October last year) that Telstra had, in the period from 1 July, when the filter was implemented, until 15 October last year, blocked 84,000 attempts to access sites on the blacklist. However, what has not yet been reported is that those requests were not made uniformly over that period.

Information released under Freedom of Information laws late last year show that in fact, as time went on, less and less requests were made to access child abuse material on the list — presumably, as Telstra customers attempting to access the offensive material became aware that the telco had implemented a filtering system to block the requests.

However, over the succeeding weeks through to mid-October last year, fewer and fewer requests were made. In the week commencing 13 August, 8,649 requests were made, but by September the figure was down to between 1,193 and 3,452 requests per week, and in the week beginning 15 October, just 989 requests were made — which had previously been close to the lowest requests received in one day, in the filter’s first month of operation. 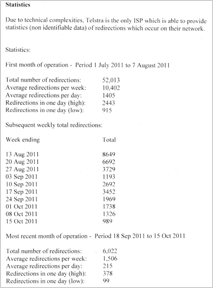 In the period from mid-September to mid-October, the lowest day saw just 99 requests made by Telstra customers to access the blocked material. To access the complete statistics contained in the document released under FoI, click the image to the right.

Data is not yet available for the period following October, and Telstra is the only ISP so far to have been tracking the filter requests being made — with neither Optus or CyberOne having released any statistics about how many of their customers are trying to access the offensive material.

The documents released by the AFP form part of a briefing package which Neil Gaughan, the national manager of the Australian Federal Police’s High-Tech Crime Operations Centre, used at a Senate Estimates hearing in October to answer questions from Senators regarding the Interpol filtering scheme, which is voluntary for ISPs to participate in, but not voluntary for their customers.

In the Senate Estimates session, Gaughan did reveal the headline statistics that 84,000 requests for offensive material had been blocked by Telstra in the period. However, he did not reveal the additional granularity around the fact that the requests by Telstra customers decreased markedly following the first month of the filter implementation.

opinion/analysis
Firstly, let me apologise as a journalist for not releasing this information earlier. It was part of a FoI pack of briefing documents which I received from the Australian Federal Police late last year. At the time, I chose to focus on other aspects of the documents, and the release of this statistical information went onto the backburner early in 2012 as the filter debate died down.

In the past few weeks, however, the filter debate has ramped up dramatically again, with Communications Minister Stephen Conroy making a number of statements (some of them misleading) about the Government’s mandatory ISP program and the voluntary ISP program. In addition, Gaughan himself has been back in the press discussing the issue publicly.

The “84,000” figure is being bandied around constantly at the moment, and what I wanted to accomplish with this article was to demonstrate that it’s the wrong figure to be using. The situation with regard to blocking of child abuse materials online is a great deal more nuanced than the current debate would have us believe.

Personally, I’m not sure what it means that less and less Telstra customers are seeking to access child abuse materials online, following the implementation of the filter. On the one hand, it could mean that they have simply started seeking to access those materials through other, commonly cited means — such as through peer to peer technologies or private forums — after they were blocked via the web and saw Interpol’s warning page. On the other hand, it could also mean that these individuals could have stopped trying to access these kinds of materials at all — which would be a great outcome if true.

What I do think the release of this information demonstrates is that the AFP is not being as open and transparent with respect to this important issue as it could be. Gaughan could have provided this detail at the Senate Estimates hearing in October, but chose instead to focus on the ‘headline’ figure of 84,000 attempts to access offensive materials.

Telstra, also, could have provided this information in the public domain to help fuel an open and honest debate about its voluntary filtering scheme. And, of course, Optus and CyberOne could be providing similar statistics, but are choosing not to.

It is universally agreed in Australia that child abuse materials are offensive, and most people agree that people should be prevented somehow from accessing such content, whether that be through an Internet blacklist or simply stopping the material at the source. That’s not the issue. The issue is how we do so, and as I have previously written, if Australia is to agree to block such material, it needs to do so in a transparent and open fashion — subject to civilian oversight — so that the nation can be confident that associated filtering schemes are not themselves abused. Let’s have an open and honest debate about this one, people — in the open air of democracy.