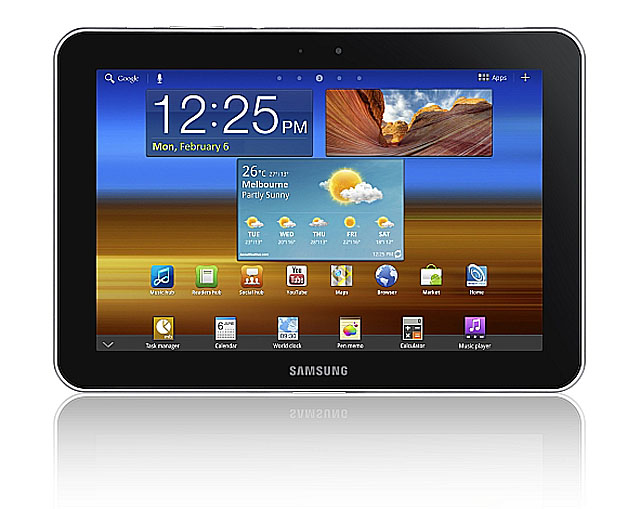 news The nation’s largest telco Telstra today started selling the first tablet able to take advantage of the dramatically heightened speeds available on its fledgling 4G/LTE network infrastructure, with the device to be a 8.9″ Galaxy Tab model manufactured by Samsung.

In a media release, Telstra and Samsung said the Galaxy Tab 8.9 4G would run version 3.2 of Google’s Android operating system, but would be upgradable to the latest version 4.0 (Ice Cream Sandwich) release in future. It would feature a 6,100mAh battery, a rear and front-facing cameras and be available with either 16GB or 32GB of storage space on board. At its heart the device will run a 1.5GHz dual core processor, and it weighs 470g.

Telstra has simultaneously announced that it would make available a 4G prepaid mobile broadband USG dongle. Previously, to get access to Telstra’s network, customers had to sign up to a monthly plan. The GALAXY Tab 8.9 and the Pre-Paid Telstra USB 4G are also among the first mobile devices in Australia to feature 3G dual channel HSPA+ connectivity, allowing them to take full advantage of Telstra’s existing 3G Next G network outside the 4G areas.

Telstra will make the Galaxy Tab 8.9 4G available on a range of 24 month plans from $29 to $89 per month, with included data quota ranging from 1GB to 15GB. It can also be bought outright for $720 for the 16GB version, with the 32GB version to cost $840. The new prepaid dongle will be available for $129, which comes with 3GB of quota that has to be used over the succeeding 30 days.

And with respect to the prepaid dongle:

“Hundreds of thousands of Australians already love the flexibility of Pre-Paid mobile broadband when commuting, logging in from uni or checking Facebook on holidays. With the launch of the Telstra Pre-Paid USB 4G hundreds of thousands of Australians who rely on pay-as-you-go mobile broadband can access some of the fastest mobile internet speeds available.”

“In 4G coverage areas Telstra Pre-Paid USB 4G owners can surf the mobile internet on their laptops up to five times faster than previously possible on 3G Pre-Paid modems. That means they can download songs faster, video chat with fewer interruptions, get TV shows in minutes and do more things simultaneously. And importantly Telstra’s Pre-Paid 4G service allows customers to get connected without the need for fixed term contracts or minimum monthly spend commitments,” Bray said.

Telstra Business customers will also be able to purchase the GALAXY Tab 8.9 from 6 March and team it with a range of Telstra Mobile Broadband plans over 24 months — including Shared plans, which give business customers the ability to share unused data across eligible services on the same account while in Australia.

opinion/analysis
Telstra and Samsung’s launch of this tablet today brings to mind the following paragraph which reviewer Jenneth Orantia wrote in her Delimiter review of the HTC Velocity 4G:

The older operating system isn’t a big deal if you’re happy to wait for the Ice Cream Sandwich update in a couple of months, but the non-AMOLED, non-720p HD display is a drawback you’ll be stuck with. Trust us – once you see the gorgeous display on the Samsung Galaxy Nexus, other smartphone screens look like faded photocopies.”

In short, using the Velocity 4G in 4G areas did produce a noticeable difference from normal 3G handsets, but the device was also hamstrung because it didn’t have the latest software (Ice Cream Sandwich) and its fit and finish wasn’t fantastic. I expect many of the same comments to apply to the Galaxy Tab 8.9, which also doesn’t run Ice Cream Sandwich, and appears to be merely an iteration of Samsung’s previous Galaxy Tab 10.1 line, which hasn’t exactly lit the world on fire even when it did go on sale in Australia following Samsung’s legal shenanigans with Apple.

Why would you rush out a 4G tablet in early 2012 without Ice Cream Sandwich? Because Telstra knows that it has a limited window of opportunity with 4G to get as many customers on board before Optus launches its own 4G network, presumably later this year. By that point, which will probably be around when Apple gets the iPad 4 with 4G out, Telstra wants to have established as strong as possible a foothold in this market.

But personally, if you’re after a 4G tablet, I would hold off a few months to see what else Telstra launches. By mid-2012, Australia should have some more visibility around what the 4G device landscape will look like as we shift into high gear towards Christmas, and by that stage Telstra’s 4G network should have been rolled out widely enough to be more useful. In particular, I would hold out until at least March/April to see what Apple can come up with in an iPad 3. Given that the iPad 2 wasn’t a huge dramatic improvement over the original iPad, but rather a solid iteration, the iPad 3 is likely to be a game changer on many levels — and will definitely support 4G speeds.