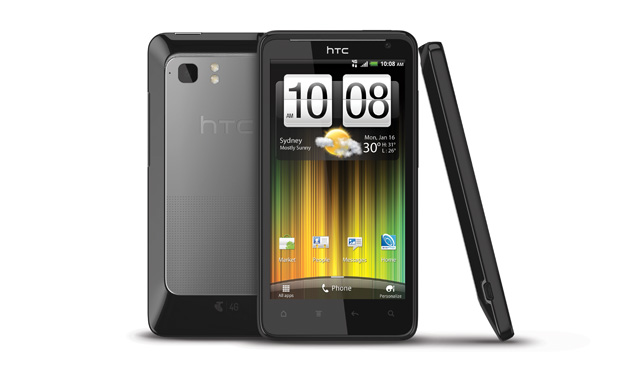 review Finally, the wait for 4G smartphones is over! The aptly-named Velocity 4G is the first smartphone in Australia that runs on Telstra’s freshly-minted 1800MHz LTE network, but it’s not the only feather in this device’s cap. The Velocity 4G has also got a huge 4.5” qHD display, 1.5GHz dual-core processor and dual-channel HSPA+ connectivity.

An impressive set of specs, but are they impressive enough for HTC’s latest super-phone to stand out in a crowded showroom? Are 4G data speeds that much better than 3G, and does it have a big impact on battery life? Should smartphone shoppers even bother with this first-generation device, given HTC’s penchant for churning out ‘new and improved models’ within months of the original smartphone’s release? Read on to find out.

Design
Weighing a meaty 163.8g and with a sizeable 4.5” display, the Velocity 4G isn’t what you’d call a petite device. Still, it feels sturdy and well-constructed, with an aluminium backplate, glossy black sides and front, and anglular lines along the edges that sit nicely in the hand. The 57mm height of the Velocity 4G means you’ll struggle to reach the top right-hand corner of the screen with your thumb when using it one-handed, unless you have exceptionally long concert-pianist fingers.

One of the good things about having a thicker smartphone is that the battery can be replaced – something you’ll want to do if you spend a lot of time in 4G coverage areas, as it drains battery faster than 3G (see below). As per usual, there are four capacitive touch buttons below the screen, along with a micro-USB port on the bottom left-hand side, a headphone jack and power/sleep button on the top, and a volume rocker on the right. There’s no HDMI port built-in, but you can convert the micro-USB to HDMI using an MHL adapter (not included).

As for the rest of its features, the Velocity 4G has most of the tech goodies you’d expect in a top-shelf smartphone. Under the hood it boasts a speedy 1.5GHz dual-core processor with 1GB of RAM and an Adreno 220 GPU, along with 16GB of internal storage (roughly 12.5GB available) and microSD expansion. It has the same HTC Sense 3.5 graphical overlay that we first saw in the HTC Sensation XL, and this offers lots of extra eye candy and usability improvements like an active lockscreen and recently used apps/system settings that can be accessed from the notification window.

Sadly, it runs the older Android Gingerbread operating system (version 2.3.7) rather than Ice Cream Sandwich; at the Velocity 4G media launch, Telstra advised that an ICS update would be forthcoming within the next couple of months. The Velocity 4G also falls behind when it comes to the screen. At 4.5”, it’s one of the largest displays available on a smartphone, but the qHD resolution is inferior to the iPhone 4/4S’ Retina display and the 720p HD display of the Samsung Galaxy Nexus.

Nor is the Velocity 4G’s Super LCD technology a patch on any of the AMOLED variants that can be found on most Android super-phones and some Windows Phone devices. It’s reasonably bright, but contrast, black levels and colour saturation are inferior, viewing angles aren’t very wide, and the protective glass panel is quite reflective, which makes the screen hard to see outdoors if brightness isn’t dialled all the way up.

Performance
So just how fast is Telstra’s 4G network compared to existing 3G? We used Speedtest to measure the Velocity 4G’s upload and download speeds at four different locations in the Sydney CBD and compared the results with a Samsung Galaxy Nexus (which has speedy 21Mbps HSDPA) running on Telstra 3G.

As you can see from the table above, 4G is fast. Really fast. To put it into perspective, we ran Speedtest on the Samsung Galaxy Nexus when connected to our ADSL+ wireless network at home, and got 11.16Mbps downloads and 1.1Mbps uploads – both of which are slower than any of the results we got on 4G. Obviously, there’s an even bigger difference between 3G and 4G. Whether you’ll see any a difference between regular 3G and the Velocity 4G’s dual-channel HSPA+ will depend on where you use it.

Naturally, things like video streaming, VoIP, uploading photos and videos and large file downloads will get the benefit of these faster download speeds, but does it make much of a difference for day-to-day web browsing? We fired up the Flash- and Javascript-intensive SMH website on both test devices within a 4G coverage area, and the Velocity 4G loaded it completely in 16.84 seconds, while the Galaxy Nexus did the same in a little over five seconds later.

But download speeds aren’t the only factor – the browser on the Galaxy Nexus (which achieved a Rightware Browsermark score of 96,015) is significantly faster at rendering web pages than the browser on the Velocity 4G (Rightware Browsermark score of 39,751 – higher is better), so we can expect a much bigger disparity between non-Ice Cream Sandwich smartphones and the Velocity 4G. It also means that web browsing should get a lot faster on the Velocity 4G once it gets the Ice Cream Sandwich update.

The next big question is whether using 4G takes a toll on battery life. In short, yes. For our first test, we stayed outside of 4G coverage areas, and with light use (two hours of screen-on time and 10 minutes worth of phone calls), the Velocity 4G lasted for nearly two days (1 day, 19 hours and 27 minutes, to be exact). In our second battery test, we had the same usage scenario, but spent eight hours in a 4G coverage area and the rest in a 3G zone. For that test, the Velocity 4G lasted for 1 day and 4.5 hours. It’s clear that 4G does consume more battery life than 3G, but unless you spend all of your time in the city, you should be able to get a full day’s use out of the Velocity 4G with light to medium usage.

Conclusion
Being on the bleeding edge is something early adopters (ie, many Delimiter readers) thrive on, but the Velocity 4G presents something of a conundrum. Sure, it has faster-than-ADSL2+ speeds when you’re in a 4G coverage area, and faster-than-regular-3G speeds when you’re not, but it’s missing other cutting-edge features that early adopters may be looking for. The older operating system isn’t a big deal if you’re happy to wait for the Ice Cream Sandwich update in a couple of months, but the non-AMOLED, non-720p HD display is a drawback you’ll be stuck with. Trust us – once you see the gorgeous display on the Samsung Galaxy Nexus, other smartphone screens look like faded photocopies.

There’s also the matter of quad-core smartphones on the horizon that will make the Velocity 4G’s 1.5GHz dual-core processor look positively Celeron-ish by comparison – one of which is likely to be the iPhone 5 that’s expected midway through this year. Finally, there’s HTC’s rather unfortunate habit of upgrading its own flagship handsets at breakneck speed, meaning there’s likely to be a better version of the Velocity 4G on it’s way – we’re actually surprised HTC hasn’t announced it already.

If you absolutely have to upgrade your smartphone now, the Velocity 4G makes sense if you deal with a lot of large files and find yourself in 4G coverage areas on a regular basis – particularly if you tether your smartphone to your laptop. But the promise of better 4G smartphones on the horizon, with higher-res displays, bigger batteries and quad-core processors, makes us hesitant to recommend the Velocity 4G. Telstra’s 4G network as it stands is still too limited in coverage to make the most of it, and without that feature, the Velocity 4G is fairly unremarkable compared to other high-end smartphones.

The HTC Velocity 4G is available exclusively through Telstra on a variety of plans, including for $0 on the Freedom Connect Plan with $800 of worth of included call and MMS, unlimited SMS and 2GB of data.