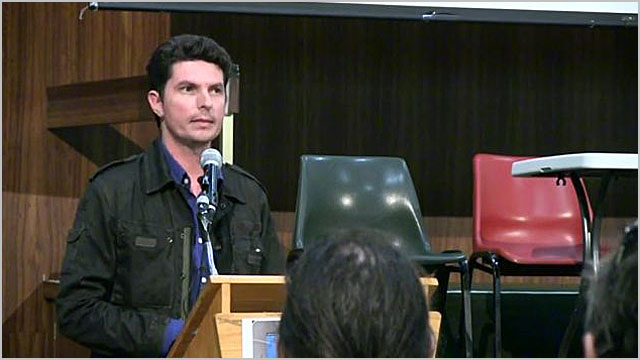 news Greens Senator Scott Ludlam has publicly stated that he suspects law enforcement agencies of bugging his mobile phone, despite admitting that he doesn’t have a shred of evidence that such action might be taking place, and despite the fact that he has not had his mobile phone examined for bugging software.

In a radio interview with 6PR this morning (the full audio recording is available online here), Ludlam, who is the Greens Communications Spokesperson, said he first became suspicious that his phone had been bugged during the past week, part of which he has spent at several events with independent computer security researcher and hacker Jacob Appelbaum, an associate of Wikileaks founder Julian Assange.

Appelbaum and Ludlam spoke extensively at an event in Melbourne on Saturday about the dangers of increasing levels of covert government surveillance on Australian residents. Today, Ludlam said at one point when he was with Appelbaum he noticed that “the battery on my phone was draining very fast”. Appelbaum’s view on the matter, he said, was that it could be a symptom that the phone was being wiretapped. Ludlam uses an iPhone, several models of which have recently suffered battery draining technical issues unrelated to wiretapping.

Ludlam emphasised that he had “nothing” to back up the idea that the phone was being tapped. “I wouldn’t even dignify it with the term evidence … it’s entirely circumstantial.” he said. “It was something I was whingeing to Jacob about, and he said: ‘You know what that can mean’.” In addition, he stated that he hadn’t “made any accusations” about the Government tapping his phone.

However, in the same interview Ludlam said it was “concerning” that “simply by being in the company of Jacob or people associated with Wikileaks that my phone might then have been wiretapped”. In addition, he noted that “it seemed interesting to note that there is no reason that we would be immune” from wiretapping, referring to himself and the organisers of the Melbourne event.

“I went through the same sort of psychology as most people,” he told the 6PR host. “Your first reaction is look, well I’m not interesting enough, I’m too boring to spy on, so I’m not worried about this. The second stage is saying, well maybe I am being spied on, but I’m not doing anything wrong, so it still doesn’t bother me, and the third stage is no, bugger that, we do deserve privacy, we have a right to privacy, and it’s not appropriate for, in my view, as many as a quarter of a million of these data access requests being made every year, with nobody having the foggiest as to what they’re for.” Ludlam was referring to telecommunications surveillance statistics recently published by local law enforcement agencies.

Ludlam linked the issue to a Sydney Morning Herald article published several weeks ago which revealed that the Federal Resources and Energy Minister, Martin Ferguson, had secretly pushed for increased surveillance by police of environmental activists who had been protesting peacefully at coal-fired power stations and coal export facilities, with some of the work being carried out by a private contractor, the National Open Source Intelligence Centre (NOSIC). If these kinds of activists could be spied on, he said, ” why not a Greens MP?”

opinion/analysis
I am extremely surprised to find the normally level-headed Senator Scott Ludlam engaging here in what I feel I have no choice to describe as conspiracy theories.

Frankly, as the Senator has openly admitted, he has not a shred of evidence that his phone has been bugged. I consider it irresponsible of Ludlam to raise the issue in public without first finding that evidence, if indeed any exists. I would also consider it irresponsible of him, and potentially an abuse of his parliamentary position, for him to contact the Inspector-General of Intelligence and Security about the matter, without first finding that evidence.

Now, I think it’s important to note here that I personally am highly suspicious of surveillance efforts by Australian law enforcement agencies, and I have personally made great efforts to bring these efforts to light. For example, I have been one of the main Australian journalists reporting over the past few years on the Attorney-General’s Department’s data retention proposal, which would dramatically expand police powers to retain Internet users’ data. In fact, I filed a Freedom of Information request with the department this week on the issue.

Likewise, I have consistently published information on other government censorship and control measures, such as various Internet filtering proposals and secret meetings about online copyright infringement. So I am not unsympathetic to Ludlam and Appelbaum’s views — far from it. I am not the Australian Federal Police’s favourite journalist and I’m probably on a list of rabble-rousers who would be first against the wall if the Attorney-General’s Department got their way ;)

However, I listened to the whole ‘War on the Internet’ event held by Ludlam and Electronic Frontiers Australia (the videos are available here), and I must note that I found much of the event to be chock-full of the sort of conspiracy theories which any rational journalist must feel uncomfortable listening to. The entire event had a more than blasé’ relationship with the facts, and I believe Ludlam’s suspicions this week about his phone being tapped are the fruit of spending too much time in the company of people like Jacob Appelbaum, who are visibly attempting to construct a narrative around inappropriate surveillance based on what, at least in Australia, is very thin evidence. I’m sure things are different in the US.

TL;DR: Show us the evidence, Senator Ludlam, or else stop discussing the matter in public.