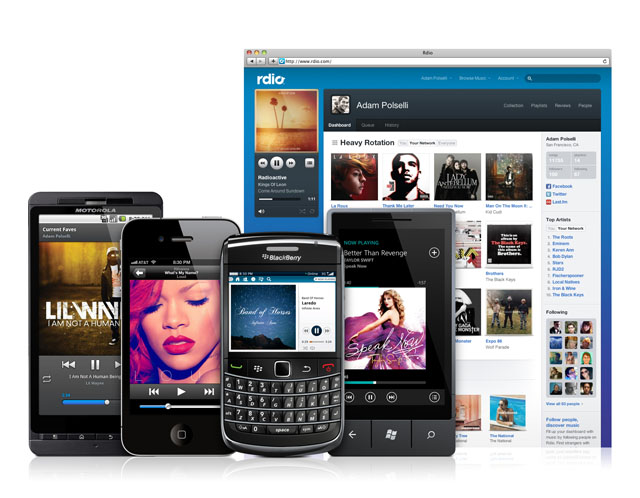 news Rdio, the music streaming service from the founders of Skype has launched in Australia and New Zealand this week, according to a blog post on their website. Rdio is now available on the web, iPad, iPod touch, smartphones like the iPhone, Blackberry, Android and Windows Phone 7, and on desktop apps. Rdio is also available for users with a Sonos wireless audio system at home.

Rdio is currently available in several other countries including the US, Canada, Germany and Brazil. Rdio is offering a seven-day free trial of Rdio Unlimited for Australians, who can sign up using Facebook or their email address.

Subscribers can play any of 12 million songs from major labels and thousands of international and domestic independent labels, without any limits and without advertisements. Users can follow friends, other users with similar taste in music, and influencers. The service offers access to music from anywhere as soon as it is released, and offline listening by syncing music to mobile phones. Creation of collaborative playlists and sharing with friends on Facebook, Twitter and Last.fm is also possible. Users travelling abroad can continue to use their Rdio account. Rdio also offers recommendations and suggestions to users on what to play next, with artist radio stations and customised radio stations from other users’ collections.

There were no streaming music services available in Australia a year ago; that has changed in the current scenario, with at least six services pitching their wares to Aussie customers. All offer music from the big four music labels – Sony Music, Universal Music, EMI Music and Warner Music, in addition to independent labels. Microsoft’s Zune Pass offers 13 million tracks, while Music Unlimited and BBM Music both offer 10 million tracks. Songl has four million tracks and Samsung Music Hub has three million.

Like Rdio, the all-you-can-eat model is offered by Music Unlimited, Zune Pass, Samsung Music Hub and Songl, all of which also offer cloud-based access, use of the service on specific home entertainment devices, and mobile apps. BBM Music from Research in Motion (RIM) limits subscribers to 50 songs, while allowing access to music from BBM Music friends – an interesting way of discovering new music. BBM Music is accessible only by Blackberry users.

Songl is one of the only Australian unlimited music streaming services currently available on the iPhone, in addition to being available on Android, the Sonos music system and desktop web browsers. Zune Pass is the only service that allows purchase as well as streaming of music tracks, and complete download of tracks on the Windows Phone and Zune Music Player, in place of streaming.

Sony’s Music Unlimited offers a Now Playing Screen that allows users to jump to other albums by the same artist, browse for similar artists, and read detailed artist biographies where available. Premium channels also enable browsing through the global top 100, local top 100 and top 100 lists for particular genres, and a “you might like” recommendation based on tracks in the user’s library. The “Music Sync” feature also allows replication of songs already on the user’s desktop to Music Unlimited, a PC-only feature.

With the impending launch of Spotify, the market for music streaming services in Australia looks to be heading for intense competition and more choices for customers.