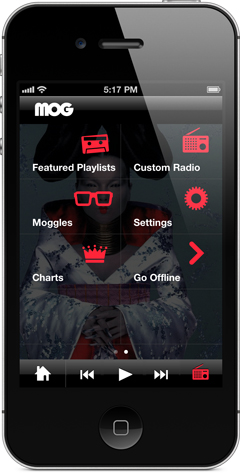 news Australian telecommunications company Telstra and subscription music service company MOG yesterday announced a partnership to provide Australians with unlimited, on-demand access to an estimated 15 million music tracks that can be streamed to their mobile, tablet, computer or net-connected TV.

A media release from Telstra claimed that the partnership was the first of its kind in Australia and would change the way Australians listened to their music. Telstra’s Executive Director of Media, Applications and User Experience, J B Rousselot said: “Customers will receive the best music experience with MOG through faster download speeds, faster streaming and no data costs for using the service.”

Rousselot predicted that the days of storing CDs or loading playlists onto devices was coming to an end and the ‘MOG powered by Telstra’ service would provide Australians access to unlimited music for less than the price of a CD each month. Telstra customers would not have to pay any additional data charges for streaming music through the MOG app, which they would have to download on to their smartphones or tablets, or alternately login to their account via a PC or MAC.

Expected to be launched in the coming months, the Telstra-MOG on-demand streaming service claims to be ad-free with unlimited download and storage options on connected devices – beneficial for those on the go even when offline or when outside a connected area. The service would offer instant recommendations based on a listener’s individual music preferences.

“Just for you” is another personalised option that offers music recommendations based on the listener’s MOG listening habits and artist “likes” on Facebook. This is in addition to New Releases, Editor’s Picks, Top Charts, Featured Playlists, and Custom Radio options. MOG streams music at 320kbps, which is expected to give customers a good listening experience.

Delimiter’s December 2011 article on the best Australian streaming music service had confirmed a number of music streaming services flocking to Australia with no less than five music subscription services available by the end of the year. Each company offered different set ups, different tracks, different pricing models and so on.

According to estimates put forth by Telstra, the number of subscribers to mobile music streaming services is expected to approach 161 million worldwide by 2016. As the exclusive provider of on-demand music to Telstra, MOG hopes to broaden its reach and gain a significant market share in Australia through this partnership and offer Australians the best music listening experience available on multiple platforms.

David Hyman, CEO and founder of MOG remarked, “Australia is a key, major music market and we’re pleased to be the sole provider of on-demand streaming music for the leading telecommunications provider in Australia. With Telstra’s superior network, music lovers will get the best streaming experience from MOG’s entire catalogue of on-demand music from wherever they are and we’re making it easier than ever to do so.”

opinion/analysis
Telstra and MOG haven’t said a lot here about what the revenue or partnership model is expected to be for the pair’s launch of this service in Australia, however I expect it to be almost purely a marketing-led initiative. When you think about it, there isn’t a lot technically that MOG needs to do to launch in Australia (remove the geo-IP-block on its service, maybe?) and there isn’t really a lot that Telstra has to do to integrate it with its devices, considering the service already works with most platforms globally. In addition, one can’t imagine that Telstra will be making a whole lot of money from MOG. Usually these services are based on monthly subscriptions, so perhaps Telstra would be making a couple of dollars a month per user for helping to promote the service.

You really have to wonder why telcos such as Telstra are so desperate to launch these kind of value-added services in Australia. Without any really good levels of revenue, and without Telstra actually having to do much technically, it just doesn’t seem like this kind of partnership is a big deal for Telstra. In addition, I don’t understand why Telstra customers (disclosure: I am one) would sign up to whatever music streaming service Telstra told you to, instead of just using whatever independent platform (Spotify etc) they wanted to.