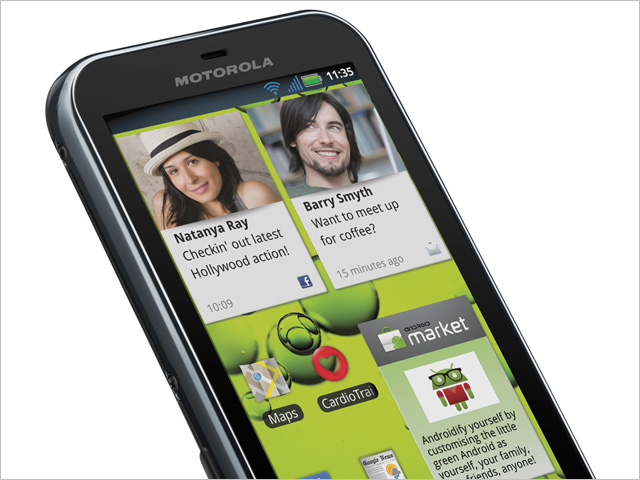 review Not everybody needs a smartphone with a dual-core processor or a huge touchscreen. If you find portability, durability and an affordable pricetag to be more important, the ruggedised Motorola Defy+ may just be your ideal smartphone.

Design
One of the first things that strike you about the Defy+ is just how small it is. We’re used to ruggedised devices being comically oversized compared to their non-rugged counterparts, but the Defy+ is actually one of the smallest smartphones we’ve reviewed this year. At 107mm tall, it’s a lot shorter than the iPhone 4S — despite having a larger 3.7” display – and while it’s 4mm thicker, it’s also considerably lighter at 118g.

A quick inspection of the Defy+ reveals that it isn’t built like your everyday smartphone. Seven visible screws around the sides gives it something of an industrial appearance, while the headphone jack and micro-USB charging port are sealed off with plastic plugs that prevent dust and water from entering. The back cover has a secure latch for the same reason. The standard four capacitive buttons are below the screen, and there’s an indicator light above the screen that flashes whenever you’ve got a new notification, the phone is running low on battery, or it’s charging.

Features
The Defy+’s main claim to fame is that it’s ruggedised. More specifically, it can survive being immersed in up to one metre of water for 30 minutes, the screen uses the scratch-resistant Corning Gorilla Glass (like many other new smartphones), and it’s dust-proof and shock-proof. Considering the original Defy is the only other smartphone that we know of to offer these ruggedised credentials, this puts the Defy+ in a great position for being the smartphone of choice for tradies and other active professions, not to mention those that have lost one too many smartphones to the elements. There is, however, no ruggedisation on the casing itself, so if you drop the phone on a hard concrete surface, you’ll still get ugly dents and scratch marks.

Of course, that’s not the only worthwhile thing about the Defy+. Even if you aren’t fussed about durability, this smartphone acquits itself well for its $299 pricetag (prepaid through Telstra). It runs Android 2.3 Gingerbread (the exact build being 2.3.4), has a 1GHz TI OMAP 3620 processor, 512MB of RAM, 1.1GB of internal storage (with a bundled 2GB microSD card), a 3.7” LCD display running at an 854 x 400 pixel resolution, and a five-megapixel camera on the back (but no front-facing camera).

Software-wise, it comes with Motorola’s standard MOTOBLUR skin, which consists of custom widgets on the homscreen (largely of the social networking variety), a custom app launcher that lets you sort apps by recent and downloaded, as well as custom groups, and enhanced security features. There’s also a nifty Profile option that lets you create up to three different homescreen configurations.

Performance
So how well does the Defy+’s ruggedisation claims hold up in practice? To test its water-resistant properties, we first put it under a running tap while playing music through the speaker, and it continued to play music with no problems. You can’t operate the touchscreen while it’s underwater, although we noticed that it would register phantom touches all over the display while it was being wet.

Our next test was “accidentally” spilling a glass of beer over it, and that too proved to be water off a Defy+’s back (boom-tish!). Our final torture test was dropping it into a half-metre-tall bathtub full of water and leaving it there fore 30 minutes while it was playing a movie. The Defy+ played the movie without issue for the entire time, and when we retrieved it from the bathtub and wiped it off, it all still worked perfectly, although we noticed there were a couple of drops of water under the battery cover.

The dust-proof test was a bit easier; we gave the Defy+ to one our construction worker mates and told him to leave it out on the site. We picked it up a few hours later covered in dust, but once we wiped it off, it was none the worse for wear. As for the Corning Gorilla Glass, we didn’t test that specifically, as we find the sight of a scratched screen to be simply heartbreaking, but our past experience with such screens hasn’t left us convinced that it’s that much scratch-resistant than other smartphone displays.

The Defy+ performed as well as we’d expect for a smartphone with a single-core 1GHz processor. Which is to say, it’s no Speedy Gonzales, but it’s fast enough for everyday tasks like unlocking the phone, swiping between homescreens, typing on the software keyboard and bringing up the apps launcher. There are a few delays here and there; in particular, it’s a little slow to change display orientation, and there’s a few seconds of delay when launching apps. Rightware Browsermark, which measures a devices ability to render HTML and Javascript, returned an average score of 32261 – again, on par with our expectations.

Calls sound great through the Defy+’s earpiece – if only we could say the same about calls through speakerphone, which easily had the worst sound that we’d heard on a mobile phone in quite a while. Audio was very distorted and crackly, and we had difficulty making out what callers were saying. This problem manifests itself when you play music through the external speaker as well, although – oddly – ring tones seem to play just fine, and are more than loud enough to hear in a noisy environment.

By the numbers, you’d expect the Defy+ to have excellent battery life, between the sizeable 1700mAh battery size, the relatively small screen and display resolution, and entry-level (by today’s standards) processor. It didn’t last as long as we were expecting, but with heavy use, you should be able to get it to last a full workday.

We tested the Defy+ under lighter conditions, consisting of 1.5 hours of screen-on time, Gmail, Twitter and Facebook accounts syncing in the background, and 10 minutes worth of calls, and we were able to stretch the Defy+ to just over 24 hours of use. This is with the Defy+’s battery mode set to ‘Nighttime saver’, which turns data syncing off between 10PM and 5AM.

Conclusion
Thankfully, Motorola hasn’t added much of a premium for the ruggedised construction. At $299 outright with Telstra (or on a plan), it competes extremely well with other non-rugged prepaid smartphones like the HTC Incredible S (Optus) and the Samsung Nexus S (Vodafone). It’s extremely compact, affordable, has ‘good enough’ battery life and performance, and offers some nice software and security enhancements on top of the standard Android 2.3 build. The scratchy speaker will be a deal-breaker if you like to listen to music through the external speaker or use the speakerphone function a lot (yes, it really does sound that bad), but otherwise, the Defy+ is an outstanding option if you’ve got an active job, you’re accident-prone, or you just want a smartphone that doesn’t need to be handled with kid gloves.