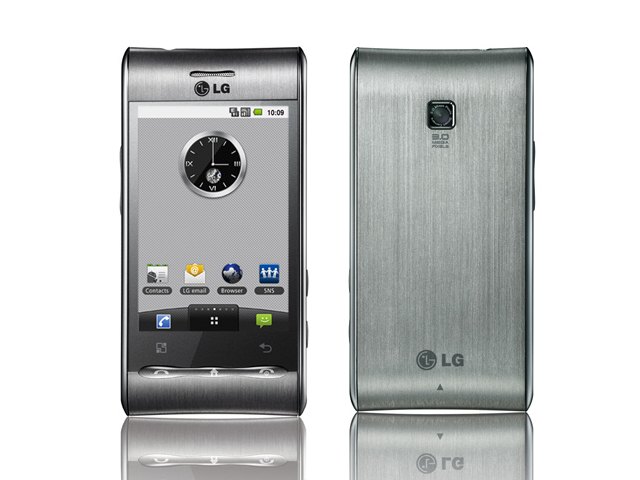 LG’s entry level Android-based handset — the Optimus GT540 — has been on the Australian market for a few months now. At first glance its sleek exterior makes it an attractive option for the fashion-conscious. However, in general we find it hard to recommend anyone buy this handset, due to an extremely frustrating touch screen that does not respond well to user input. Buyer beware!

Design
The first thing about the LG Optimus GT540 that caught my eye was the design — it’s much nicer to look at than some other models on the market. The case finish resembles dark brushed-aluminium with a curved back and symmetrical concave ends. The device is 12.7mm thin and weighs 115.5g g which combines for a pretty solid and snug fit in the hand.

There are colour choices available — either the dark silver finish or a metallic pink.

The faux aluminum case is sturdy and feels solid in the hand unlike other handsets that use plastic cases. However, the screen wasn’t so sturdy in a real-life scenario. The screen didn’t survive the duration of our testing period unscathed and had scored three minor dints, although a screen protector was on and definitely helped protect the screen.

Features
The LG Optimus operates on the Android 1.6 operating system with Android 2.0 backports. It comes pre-installed with a few LG applications, including the usual amount of third-party manufacturer bloat installed. The display is a 3″ 320×480 pixels resistive touch screen and is not multi-touch.

Other features include a 3.15 megapixel camera with face tagging and VGA video recording at 15fps. The processor is clocked at 600Mhz and has an expandable memory of up to 32GB. Other notable features are GPS, Wi-Fi, Bluetooth 2.1, standard multimedia support and a 3.5mm headphone jack.

Performance
Although the operating system is the older Android 1.6, LG have made some tweaks to it that make it feel like parts of Android 2.0 have been dropped in. Overall it feels better than 1.6, you could call it 1.6.LG.

LG’s home screen is responsive and adds useful features without losing Android’s original intent. There is an application available that makes it easy to switch between the LG edition and the basic Android home screen.

There are 2 ways to put text — to hold the screen portrait requires virtual T9 text input, where a landscape view will convert to virtual QWERTY keyboard input.

One big problem was that the resistive touch screen requires more force than expected and was highly frustrating. We would expect a better touchscreen at that price, but it would have been ideal for LG not to launch the phone (or any phone) with that particular screen.

There are seven home screens, which are breezy to swipe through. Like other Android-based handsets, there is a notification bar on the top of the home screens. This notification bar, however, cannot be dragged down to see the quick details of new messages, emails etc as it can on most Android handsets.

The notification bar on the Optimus is not interactive — at least we couldn’t get it to work without damaging the handset as some reviewers have apparently done — instead the user is required to go through two button presses to display the details.

The display is bright indoors, although colour banding is present in some images.

All this being said, I think a complete blow away of the out-of-the-box applications and operating system would do wonders for the phone’s operational performance.

The Mini Pro is justifiably more expensive outright because of the slide-out QWERTY keyboard, 5 megapixel camera and better touch screen — although that should be a given in todays market. At 2.6″ the Mini Pro’s screen is smaller than the Optimus and also sports a 600MHz processor. The Mini Pro runs Android 1.6, although it will a receive a 2.1 update later this year. Telstra had offered the HTC Desire on the same $49 plan, but the handset is believed to have sold out.

The GT540 is not indicative of LG’s future in the smartphone market, with the company planning big leaps forward in its Optimus range in the near future. For example, the company could be the first group out with a truly super smartphone based on NVIDIA’s Tegra 2 processor.

The Optimus would be ideal for light use consumers who aren’t interested in a high performance device like the Desire or certain Galaxy handsets. However, the resistive touch screen makes it hard to recommend.