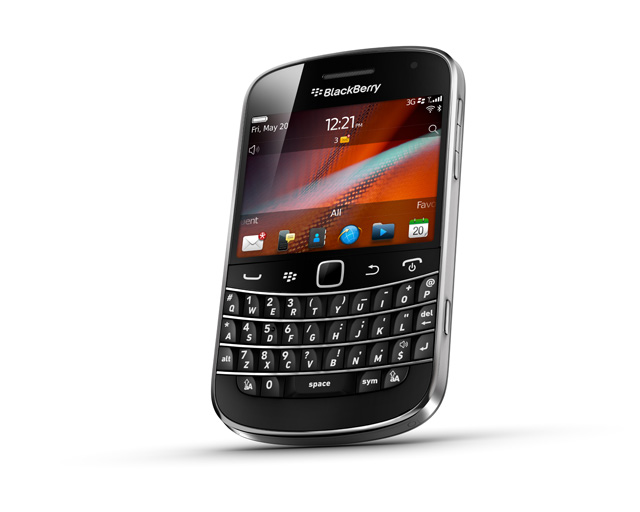 review RIM has had a rough time adjusting to the iPhone era. It’s gone from the disastrous BlackBerry Storm (marks 1 and 2) to the lukewarmly-received Torch 9800 in an effort to get the balance right between touchscreens and the classic BlackBerry form factor, as well as deliver the same fast performance and visually-appealing graphics that smartphone users have come to expect.

We think they’ve finally nailed it with the Bold 9900. The Bold has always been our favourite line of BlackBerrys due to its class-leading physical keyboard, and with the 9900, RIM has modernised its appearance and equipped it with a touchscreen, zippy 1.2GHz single-core processor and the latest BlackBerry OS 7 operating system.

Design
The Bold 9900 won us over as soon as we got our hands on it. The glass screen and backplate give it the same luxurious feel of an iPhone 4, while the brushed stainless steel band and matching silver accents on the front and rear and full QWERTY keyboard give it a distinctive look that’s classic BlackBerry.

The irony of the 9900 is that it’s more modern-looking than the last two Bold smartphones and yet is a dead-ringer for the original Bold 9000 that launched five years ago. This design (which is taller, wider and heavier than the previous Bold – but also 3.5mm slimmer at 10.5mm) allows for a bigger 2.8″ display and a larger keyboard. Yup, RIM has brought back the Bold 9000’s spectacular QWERTY keyboard as well, which to this day still ranks as the best we’ve ever used on a smartphone.

RIM hasn’t deviated much from the standard hardware layout: the red indicator light that’s bright enough to see from space sits on the top right, four hardware buttons are below the screen, and there’s a lock button on top. Volume keys and two user-assignable shortcut buttons adorn the right, and a headphone jack and micro-USB port sit on the left. The microSD card slot is behind the battery cover and you can’t get to it without removing the battery — a downer for those that like to hot-swap memory cards.

Features
The 9900 runs the latest BlackBerry 7 OS. It’s only a modest upgrade from BB6, and looks almost identical, with the same homescreen, notification window and categorised application drawers. But there are small refinements here and there. IM has abandoned the stylised ‘ouline’ icons — which were always at odds next to third party app icons — in favour of standard coloured icons that have been updated slightly to add depth.

RIM has managed to squeeze a three-by-six grid of application icons into the launcher by making the icons smaller and removing the name of each app below the icon. The latter adds an extra (albeit minor) layer of complexity to using the Bold 9900, as you’ll have to play a guessing game initially as to what each icon represents. We’d rather RIM had left the labels in.

One of the core new features of BB7 is the ‘Liquid Graphics’ technology – which is basically a fancy way of saying that the user interface doesn’t lag like a sleepy turtle anymore. This is largely thanks to the souped-up innards in the Bold 9900; instead of crippling it with a last-gen processor and minimal RAM — a bad habit that RIM’s fallen into — the 9900 has a speedy 1.2GHz single-core processor and 768MB of RAM.

There’s a handful of other new features in BB7: voice-activated universal search that’s remarkably accurate (although you have to hit ‘Done’ on the screen after you’ve spoken, which kind of defeats the purpose), a new BlackBerry Balance security technology (BES users only) that keeps corporate and personal information separate, and a BlackBerry Protect app for transferring, backing up and restoring data on the device as well as locating and remotely locking or wiping the 9900 if it’s lost or stolen. The web browser has also been updated, and according to RIM it loads pages 40 percent faster than devices running BB6 — although Flash support is still a no-show.

The Bold 9900 is no shrinking violet in the hardware department either. On top of the aforementioned processing capabilities, it has a 2.8″ capacitive touchscreen, 8GB of internal storage (plus a microSD card slot for up to 32GB additional storage), tri-band HSPA+, and dual-band 802.11n. There’s also an NFC chip built-in, but you can’t actually do anything with it at the moment.

Performance
RIM hasn’t jumped on the dual-core bandwagon yet, but after testing the Bold 9900, we’re convinced it doesn’t need to. This smartphone is super-responsive, with almost none of the lag issues that plagued its predecessors. Using the 9900 side-by-side with the Torch 9800, there’s a palpable speed difference when it comes to scrolling through icons, opening apps, and displaying notifications, and the 9900 actually does what you tell it to do the first time round (unlike the original Torch) — no pressing hardware buttons or jabbing at the screen repeatedly is necessary.

We only encountered one area where it exhibited the same sluggishness of BB6-powered BlackBerrys, and that’s when installing new software. The 9900 (like BlackBerrys before it) slows to a crawl when you install an app from BlackBerry World, to the point that you can’t really do anything until the app has finished installing. What’s worse, if you’re updating an app that’s already installed, you still have to reboot the BlackBerry to finish the installation.

On a more positive note, the Bold’s keyboard is a revelation. After a steady diet of touchscreen-only smartphones, the ability to actually feel each key and press down on them to type feels like some marvellous new technology that we’ve never experienced before. It really is that good! We’re no slouch on a touchscreen, but typing on the Bold 9900’s physical keyboard is just so much faster and significantly less error-prone

The Bold 9900’s 2.8″ display is also exceptional. Yes, it’s small, but it’s a necessary tradeoff to fit the QWERTY keyboard within the candybar form factor. Everything else about it is top-shelf, from the responsive capacitive multi-touch technology and high-res 640×480-pixel resolution to the vivid colours and wide viewing angles. The small screen size and VGA resolution gives the display an exceptionally high density of 285 pixels per inch, resulting in extremely sharp text and gorgeously crisp photo and video. By comparison, the iPhone 4’s Retina Display has a 326ppi. The addition of a touchscreen has made the Bold even easier to use, as you can interact with screen elements directly rather than having to manoeuvre an on-screen pointer around the display.

The faster processor and larger touchscreen display was bound to take a toll on the Bold 9900’s battery, which itself is smaller than the ones found on previous BlackBerry Bolds at 1230mAh. With light use (one Gmail account being pushed to the device in the background, a handful of text messages and short web browsing sessions, and Wi-Fi on), the 9900 lasted for a day and a half. Power users should see it lasting comfortably to the end of the day, but not much longer than that.

Conclusion
The Bold 9900 isn’t for everyone. If you measure the worth of a smartphone by the number of apps and games that are available for it, or the ability to customise the interface with widgets, shortcuts and fancy 3D effects, then you’d best be on your bike and looking elsewhere. The app shortage isn’t likely to change any time soon, especially with RIM looking to migrate the BlackBerry smartphone over to the QNX operating system sometime next year. Why develop new apps for a platform that will be obsolete in a few months time?

But not everyone needs dozens of apps or multiple homescreens on a smartphone. If, like many business users, you process lots of email on a daily basis and need a dependable and secure smartphone to get you through the workday, the Bold 9900 offers a better experience than any other smartphone we know of. There isn’t much here to interest first-time users, but BlackBerry devotees should find the 9900 to be a compelling upgrade from existing devices.

The Bold 9900 is currently available exclusively through Optus on a range of plans, including $0 upfront on a $79 Cap or Timeless plan.