news National mobile carrier Vodafone has started taking pre-orders for the highly anticipated Samsung Galaxy Nexus handset to launch on its network, with an anticipated launch slated to occur before Christmas.

Vodafone said in a statement on Friday that the Galaxy Nexus would be available on “a great range of Vodafone plans”. The only way to get the handset for free (with no monthly handset repayment cost) is to buy it on a Vodafone plan of $79 per month or above, but the company is also offering it for $5 per month on a two year contract on a $59 per month plan.

Ross Parker, General Manager of Devices at Vodafone, said: “We are delighted to offer our customers one of the most anticipated Android™ phones this year, the Samsung Galaxy Nexus™. Vodafone will be selling this device just in time for Christmas. The Samsung Galaxy Nexus™ takes smartphones to the next level, combining the latest Android™ operating system with a breath-taking screen and super-fast processor.

Vodafone also confirmed that the Galaxy Nexus would support its new 850Mhz network, which is being deployed around Australia at the moment to supplement its existing network assets. The 850Mhz network uses the same spectrum band as Telstra’s Next G network. The company is billing it as being designed for smartphone use.

Vodafone’s news came after Samsung itself confirmed last week that it will officially launch its highly anticipated Galaxy Nexus handset in Australia on 14 December; although it did not give any details of carrier availability at that point.

Independent online retailers Mobicity and Kogan have already started selling the handset, ahead of any planned Australian launch by Samsung itself or any mobile carrier partners.
On its web site, Melbourne-based retailer Kogan has made an unlocked version of the Galaxy Nexus available for $799. The handset is compatible with all of Australia’s major mobile networks (including Telstra’s Next G network). It doesn’t come with a warranty from Samsung, as it has been imported from an international distributor, but it does come with a warranty from Kogan itself. 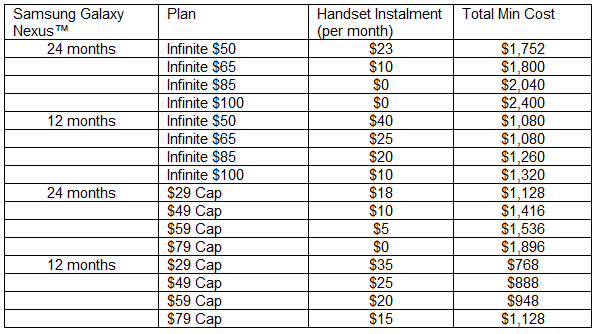