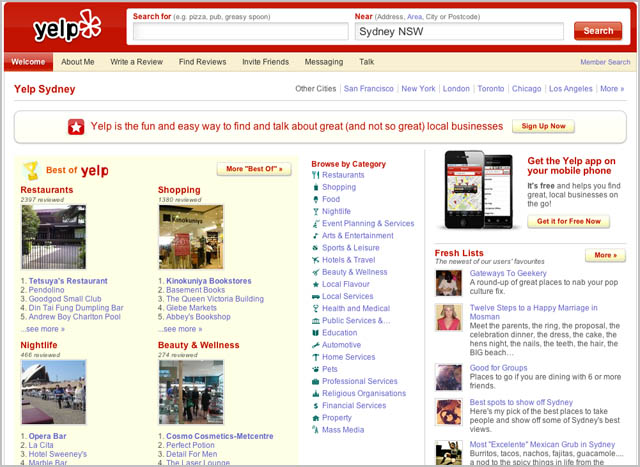 news US-based community led search site Yelp has ventured into Australia through a local version of its site. The website is a platform for sharing opinions and recommendations on businesses and services in the neighbourhood. Yelp also has iPhone and Android mobile applications, and local businesses can take advantage of Yelp’s free suite of business tools.

Founded in San Francisco in July 2004, Yelp communities have spread across major cities in the United Kingdom, United States, Canada, France, Ireland, Germany, Netherlands, Austria, Italy, Spain, Belgium and Switzerland. Since Yelp got off the ground, over 22 million local reviews have been written by yelpers. Recent statistics show that Yelp had a monthly average of about 61 million unique visitors and an average of 5 million monthly users for its mobile app.

“It’s easy to forget how much of an impact local businesses have on our day-to-day lives. Be it an auto mechanic, dentist, hair stylist or dry cleaner, we rely on them to help make life easier and more colourful. The most interesting finding for us has been that, regardless of geographic boundaries, people seem to have this altruistic desire to share their great local business experiences with others. We look forward to seeing what Aussies think of the site,” said Jeremy Stoppelman, co-founder and chief executive of Yelp.

Though Yelp can be accessed across Australia, the focus of the company’s community growth efforts initially is the cities of Sydney and Melbourne. The city-by-city expansion strategy has been historically successful for Yelp across the globe. Yelp’s basic business listing information and sales effort will be driven by Sensis, the directories arm of Telstra. Sensis’ Yellow Pages data will be integrated into the Yelp website and its sales force will help Yelp launch into the local market.

Yelp’s foray into Australia hasn’t had a very enthusiastic response yet. The website has already been censured for misinformation by Newcastle blogger Matthew Hatton, in a blog post this week following the launch.

“Yelp launched with the usual fanfare from the usual mob of “digital people” who love nothing more than to jump on a bandwagon about a social media product that’s going to revolutionise the world despite not being used by statistically significant percentage of the population,” wrote Hatton. “I’ve played around with Yelp this morning and, really, all I can say is that it’s unlikely I’m ever going to get any real use out of it.”

“… the thing I found most interesting, was that the Yelp results do not, in any way, match the Yellow Pages results for the same search queries – although both are horrendously inaccurate. Even though they both have (I would assume) the same information source,” he writes. Hatton predicts that a core, small group will swear by the service, while “The rest of the population will ignore it/not care and just do what they’ve always done.”

“What I imagine happening, is that Yelp is likely to become very similar to Google+. It’s going to have a small, core group of users (who’ll likely all agree with each other where is hot/not hot to go) that will swear by how awesome and revolutionary it is. The rest of the population will ignore it/not care and just do what they’ve always done.”

opinion/analysis
There’s a lot of reason to believe that Yelp is going to get a significant amount of traction in Australia; after all, it’s done this before, in many other countries. It has the experience and know-how to make itself important in the Australian marketplace.

But Hatton’s also right. The company’s entrance into Australia so far has been extremely sloppy; it hasn’t even bothered correctly integrating the data from Sensis and it hasn’t partnered with any of the other existing similar sites locally, of which there are quite a few. I saw a moderate amount of buzz slinging around the social media-sphere yesterday about Yelp; but by this morning that had all dissipated and people had moved on with their life.

This is what happens when you launch a service in Australia the best part of a decade after it launched in the US. People have already reverse-engineered alternatives and moved on.