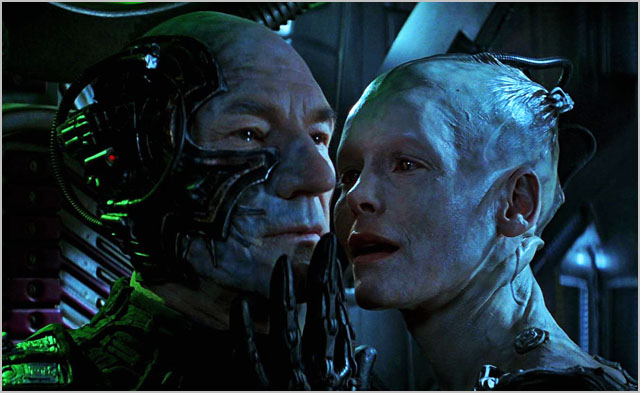 opinion You can easily imagine what coffee meetings with Michael Malone must be like these days. “Resistance is futile,” the leader of the growing iiBorg empire would sternly tell anyone brave enough to enter his company’s headquarters. “You will be assimilated. We will add your biological and technological distinctiveness to our own.”

iiNet’s rapacious and enduring interest in acquiring any major Australian ISP it can get its hands on has led to it adding dozens of scalps to its belt over the past several decades. The company’s list of successful targets reads like a list of the telecommunications industry’s developmental history. Names like RuralNet, Netlink, iHug and Origin Internet (2003), Froggy and Virtual Communities (2004), OzEmail (2005), Westnet (2008) and Netspace and AAPT (2010). And that’s not even counting the several dozen other smaller ISPs — which iiNet likes to described as ‘micro-ISPs’ — that the company has swallowed in that period.

Several of these companies have been giants of the ISP industry. The OzEmail acquisition added almost 300,000 Internet users to iiNet’s roster and catapulted it into the spot of third-largest ISP in Australia. The 2010 acquisitions of AAPT’s consumer arm and Netspace weren’t quite as large or significant, but they still had a major impact on the telecommunications landscape in Australia. But beyond this, it has been in the acquisition of smaller, typically localised regional ISPs that the true impact of iiNet’s never-ending acquisition trail has been felt.

1999 was another banner year for the company, when it picked up half a dozen ISPs of a decent size. After that period iiNet had a break of a few years, before dramatically expanding again in 2003 with another tranche of acquisitions. And since that point it has never really stopped — if there is a deal to be made in ISP land, there’s no doubt that iiNet will be one of the players invited to take a seat at the table.

Now, I don’t want to imply this has broadly been a bad thing for the industry in many ways. After the explosion in small ISPs in Australia in the early 1990’s, many of those small family businesses had to be rationalised, and iiNet has gone about doing so in a very humane way. The ISP usually gently welcomes the customers of its targets into its arms by allowing them to keep their existing broadband plans, email addresses and other preferences, and it often — for example, in the case of Westnet, Netspace and AAPT — maintains the brands which they initially signed up for.

But, like the giant force of inevitability from the Star Trek universe which Australia’s technology community is increasingly associating it with, iiNet ultimately does assimilate its targets into its own very specific iiCulture. Its acquisitions’ customers are added to its databases and gradually start purchasing its products from the mothership, their networks are added to its own and integrated, and iiNet segregates out the staff it wants to keep while gently discarding the others.

The effect that this has had upon Australia’s ISP industry over the years has been dramatic. As time has gone on, many of the best technologies, employees, networks and administration systems have come to be associated with iiNet at one point or another. Like a giant swarm, iiNet has moved through the industry, sifting out the gold from the brass and making the best parts of everything its own.
If you believe the reports published this week, iiNet is in the final stages of adding one of the last jewels of the industry to its horde: TransACT.

And I do believe the rumours. Frankly, I am extremely surprised that TransACT has survived as an independent entity in Australia for this long. I’m sure Don Malone has been knocking on the company’s door for the best part of the past five years, and it’s only due to factors such as the NBN rollout, which will overbuild its infrastructure in Canberra and Victoria, making it completely obsolete, that TransACT wants to sell up.

It was only in late August this year that Shadow Communications Minister Malcolm Turnbull visited TransACT chief executive Ivan Slavich in Canberra. “So all of this investment that TransAct has made, which is delivering very high speeds currently is going to be overbuilt and as a result will deliver no better service but undermine TransAct’s business and of course cost the taxpayer a fortune,” said Turnbull at the time.

How soon after this did Don Malone move in to make Slavich an offer he couldn’t refuse? With the future value of TransACT’s business devalued due to the NBN, it sounds like it was the perfect time to put some money on the table.

Malone famously said in mid-2010 that there were at that stage only four and a half meaningful players left in Australia’s Internet service provider market. The top two – Telstra and Optus — are too big to be bought, and the next two — iiNet and TPG — have bought almost everyone else. Then there’s Internode, which, for reasons best known to owner Simon Hackett, hasn’t bought any other ISPs nor expressed any interest in being bought, although Malone probably should have included Dodo in his list instead — as it’s larger than Internode and more aggressive in the market to boot.
Now that 2011 is almost over and iiNet just keeps on swallowing Australian ISPs, I would go Malone one further.

In the next few years, it is no stretch to argue that Australia will not only have just half a dozen major ISPs — but that those ISPs will become, in any practical sense, the only ISPs operating in Australia’s broadband market.

When you look at the remaining ISPs outside the top five, the pickings are pretty woeful. Primus, probably the next largest player, has a new local chief executive but mediocre product offerings and a US parent which is only just slightly over the edge of financial oblivion and bankruptcy. Exetel, EFTel and Adam Internet are tiny companies which have struggled to make the transition from the family-oriented ISP structure of the 1990’s into the new market structure dominanted by giants, and probably don’t make much profit, if any. None have any significant infrastructure of their own to help keep bandwidth costs down.

One can argue that new players like Vodafone will enter the market and quickly gain scale with significant marketing clout. But in an environment where iiNet and TPG have already been blanketing Australians with advertising over the past few years and Telstra and Optus have been given fresh war chests by the government courtesy of their deals with NBN Co, it’s hard to see even Vodafone having too much impact.

What does all of this mean?

It means, as I pointed out in mid-2010, that there will not be a strong level of competition for customers and innovation on the National Broadband Network infrastructure which NBN Co is rolling out right now, due to the rapid disappearance of retail service providers from the market. Customers will be increasingly presented with just a handful of choices — Telstra or Optus at the top end for bundled plans, iiNet and Internode in the middle and TPG and Dodo as the cut-rate operators.

And if TPG delivers on the early threatening promise of its 4.4 percent stake in iiNet and eventually successfully makes a move on the company, which remains vulnerable on the Australian Stock Market due to a weak share price and a lack of cornerstone investors, the market will be diminished even further and Australia will be almost back to where we started — with Telstra and Optus dominating everything and a couple of other competitive options.

It’s said that Australia loves duopolies. Woolworths and Coles. Fosters and Lion Nathan. BHP and Rio Tinto. Ford and Holden. Qantas and Virgin Blue. Fairfax and News Ltd. David Jones and Myer. Liberal and Labor. Do I need to go on? It would be an absolute tragedy if the country reverted to something close to this mix in the telecommunications sector, following the rollout of the National Broadband Network.

But every time the iiBorg assimilates another ISP, that nightmare scenario gets just a little bit closer.

Image credit: Paramount (From Star Trek: The Next Generation)