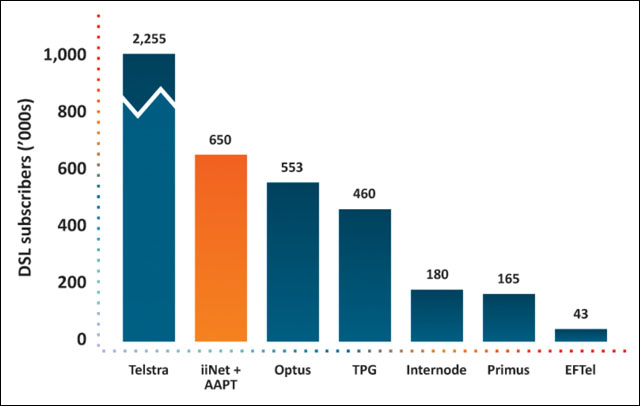 There are only “four and a half” meaningful players left in Australia’s internet service provider market, iiNet supremo Michael Malone said today — with companies like Primus, Eftel and others just not relevant any more in terms of providing competition.

As it revealed its annual financial results today, iiNet displayed the chart above, illustrating how the market had consolidated to just a handful of players — with former competitors like Westnet, Netspace and recently AAPT having been snapped up by iiNet and others having merged or been acquired.

“I argue there’s really only four and a half players left that are meaningful,” Malone said.

Of those four, Malone said it was TPG and iiNet that had in recent times been the driving force for competition in the market. “The other two, Primus and Eftel, we don’t see as particularly relevant from a competitive point of view,” he said.

Internode was seen as a business partner and also, like iiNet, as a force for innovation and better service in the market, but Malone said Simon Hackett’s baby was “sub-scale”.

It appeared the iiNet chief saw the nation’s two largest telcos — Telstra and Optus — as the biggest rivals to his company. Telstra has recently dramatically slashed its broadband pricing in a bid to make its offerings more competitive. “You can never hold back on Telstra — they’re huge,” said Malone. “And if they point their cash flow in our direction, there’s always going to be a battle to stay ahead of them. They have the advantage of incumbency.”

As for Optus, Malone noted most of the SingTel subsidiary’s attention was directed at the mobile arena, but the company was “obviously a huge player” still.

Election
iiNet itself has been a vocal proponent for Labor’s National Broadband Network policy. But today Malone said his company didn’t necessarily have a preference for the Federal Election victor come Saturday night.

The reality, he said, was that a Coalition victory would be “better for iiNet in the short term” as the Coalition’s minimalist broadband policy would allow iiNet to continue to extend its network, sweat its existing assets more and broaden its reach into new areas courtesy of the backhaul network extension it shares with Labor’s NBN policy. “In the short-term, it’s a plus,” he said.

In the long term, however, Malone said Labor’s NBN would give the nation a better long-term platform and certainty. “We wouldn’t have a preference for either Government to get up,” he said.

Results
iiNet’s financial results for the year to 30 June reflected a degree of growth in both the company’s top and bottom lines. Total revenue grew 13 percent to reach $473.8 million, with profit up 34.7 percent to hit $34.5 million and earnings before interest, taxation, depreciation and amortisation was up 20 percent to reach $80.7 million.

iiNet now has 539,000 broadband customers with the acquisition of Netspace — and is slated to add another 113,000 more with its buyout of the consumer division of AAPT. A strong driver of growth for the company is the continued popularity of its Naked DSL offering — where broadband is sold without a bundled analogue telephone line.

Other iiNet product lines doing well include its BoB combination telephone and modem — 50,000 have been sold since August 2009 — and its Voice over IP product, which grew from 120,000 subscribers this time last year to reach 163,100 a year later. iiNet is also seeing strong growth in its number of analogue phone connections — numbers rose to 191,400 this year, compared with 145,800 last year.

A key initiative for iiNet in the upcoming several years will be its fetchtv internet television product. The ISP now has over 300 fetchtv customers, after launching the service and associated set-top box in July. However, Malone said the company has not yet conducted any formal advertising for the product.

Overall Malone positioned the company as on a path to becoming “the clear leading challenger brand” in its home turf — Australia’s broadband sector — posing a threat to the nation’s second-largest telco Optus.