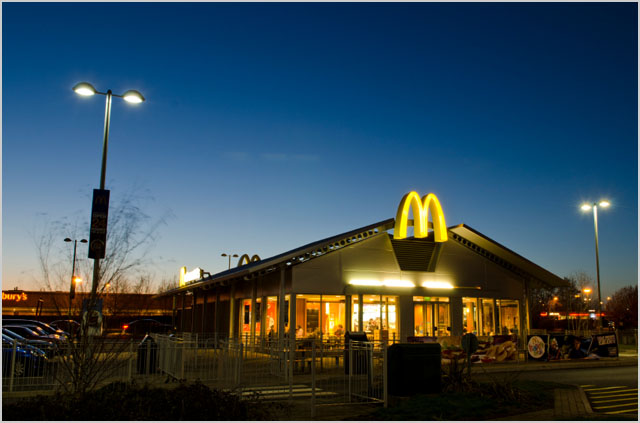 news The Australian division of fast food chain McDonald’s today confirmed long-running industry rumours that it had given incumbent IT outsourcer IBM the boot, instead picking rival firm Unisys to support its IT infrastructure in a new five-year deal worth about $30 million.

In August this year Delimiter received an anonymous tip to the effect that IBM had lost the McDonald’s account, with the tipster alleging a competitor had beaten it in a competitive tender on a number of grounds. Big Blue’s top-level management wasn’t happy with the situation, the tipster claimed at the time. “Heads will roll.” However, we were never able to verify the story, with McDonald’s maintaining IBM remained a key supplier. Until today.

This morning, Unisys issued a media release noting McDonald’s had contracted it to provide IT support services to McDonald’s in Australia, New Zealand the South Pacific region. “Under the terms of the contracts, Unisys will provide service desk, on-site and remote support services to McDonald’s chain of more than 1,000 company-owned and franchised restaurants across Australia, New Zealand and the South Pacific region, including New Caledonia, Fiji, Tahiti, American Samoa and Samoa,” Unisys’ statement noted.

“Unisys will provide its Smart On-Site Services for end-to-end support of technology used in the McDonald’s restaurants, including point of sale devices, back-office PC equipment, peripherals, wireless networks, customer order display units and cameras.” Unisys’ central service desk supporting McDonald’s will be located in Wellington, New Zealand, and will provide 24×7 coverage — matching the operating hours of many of McDonald’s restaurants.

McDonald’s chief information officer Henry Shiner said Unisys had been chosen because the company needed a partner which could provide support across “a widespread geographic region” to agreed performance levels. A McDonald’s spokesperson confirmed the work had previously been provided under a contract with IBM, but stressed the company remained an important supplier to the fast food chain, especially in the area of systems integration.

IBM is believed to have supplied IT services to McDonald’s for some time. Big Blue published a case study (PDF) at one point detailing how it had implemented a PC-EFTPOS system from 205 that would integrate its point of sale platform with its existing IP network. The project allowed McDonald’s to connect securely to the bank which handles its transactions.

“After a series of pilot projects, IBM implemented the new system across 720 restaurants within three months,” IBM wrote in the case study. At the time, McDonald’s was using Telstra for its network connections. The fast food giant’s current CIO, Henry Shiner, stepped on board a little after that point — in March 2007.

opinion/analysis
I’m not surprised to see Unisys pick up this work. The company right now is one of the kings of desktop support services in Australia — holding huge contracts with major organisations like the Departments of Defence and Immigration and Citizenship. I’m sure Fujitsu and a few others had a stab at it as well.

I would view McDonald’s move as primarily a cost-cutting endeavour. Most CIOs are loathe to switch their major outsourcing partners around, as the transition period typically involves a significant changeover effort and lots of to-ing and fro-ing. It looks like IBM has been a long-time supplier to McDonald’s in a range of areas. Now that a few projects are out of the way — such as the point of sale integration conducted a few years back, Shiner is likely betting that he can take some costs out of his outsourcing budget.

IBM isn’t usually the cheapest partner on the planet. But you go with them because they have almost limitless resources and everything you can need in-house — from soup to nuts.

One thing further: When we first got the anonymous tip about IBM losing the McDonald’s account, I was a little suspicious. It turns out the tipster got almost everything right. However, they also claimed that McDonald’s was one of IBM’s biggest clients in Australia. I would be very surprised if this was actually true.

$30 million is not a huge amount for an IT outsourcing contract — in fact it’s at the lower end of contracts that I would bother reporting on. IBM has signed many contracts in Australia worth many hundreds of millions of dollars. Westpac, DIAC, Telstra and more … the list of IBM’s scalps locally is endless, and McDonald’s is hardly a huge client for a company which makes revenue of $4 billion in Australia every year.