news The National Broadband Network Company has revealed the locations where it will roll out its national fibre and wireless network over the next 12 months, with cities, towns and suburbs all over Australia to receive the infrastructure in an accelerated process throughout 2012.

The 28 new locations of the rollout are available in the company’s press release, available below this article in table format. They range from metropolitan areas in major cities — such as Strathfield in Sydney and Modbury in Adelaide — to rural cities and towns such as Coffs Harbour, Wollongong, Toowoomba and more.

NBN Co will also expand its existing infrastructure in early stage rollout zones such as Townsville.
In the company’s statement, it stated its fibre rollout would pass an extra 485,000 premises over the next 12 months, with a further 63,500 to be passed at existing early stage rollout zones. NBN Co will also update its 12 month schedule on a quarterly basis to include additional locations, and it plans to issue a three-year indicative view of its plans early in 2012 — which will be updated annually.

On average, the company expects the rollout process to take 12 months in each location, from commencement through to the network being available for commercial use by customers. Some 12 retail ISPs — including major companies like iiNet, Internode and Primus — have already completed NBN Co’s ‘on-boarding’ process and are already offering commercial services over the NBN.

“Today’s announcement represents the start of a major nationwide construction effort that should eventually see us offer NBN coverage to every one of Australia’s 13 million premises,” said NBN Co chief executive Mike Quigley.

“We will be publishing regular updated about where precisely the NBN is being rolled out and when it will reach each area. Public education activity, to launch next year, will also explain what the rollout will mean for every Australian, how to connect to the network and why it is important that the nation upgrades its telecommunications activity.”

The company also revealed today that the next phase of its network construction would also involve the deployment of its ‘transit network’, which connect its different fibre access notes to points where network traffic will be transferred to ISPs. “In this first stage, NBN Co is planning to construct 149 transit links connecting 155 fibre access nodes, of which 30 are also points of interconnect,” the company said.

The company is also currently building fibre infrastructure in over 90 new development housing estates — comprising almost 5,000 premises. And over the next 12 months, NBN Co has also approved applications with developers to build fibre in about 500 separate towns and suburbs nationally — comprising over 67,000 premises in new developments.

NBN Co hasn’t quite gotten all of its construction arrangements bedded down yet, however. Although it now has construction contracts covering most states, it noted today that it was “current progressing negotiations” with a contractor to roll out the NBN in South Australia and the Northern Territory. Darwin, for example, is on the list for the NBN rollout in the next 12 months. 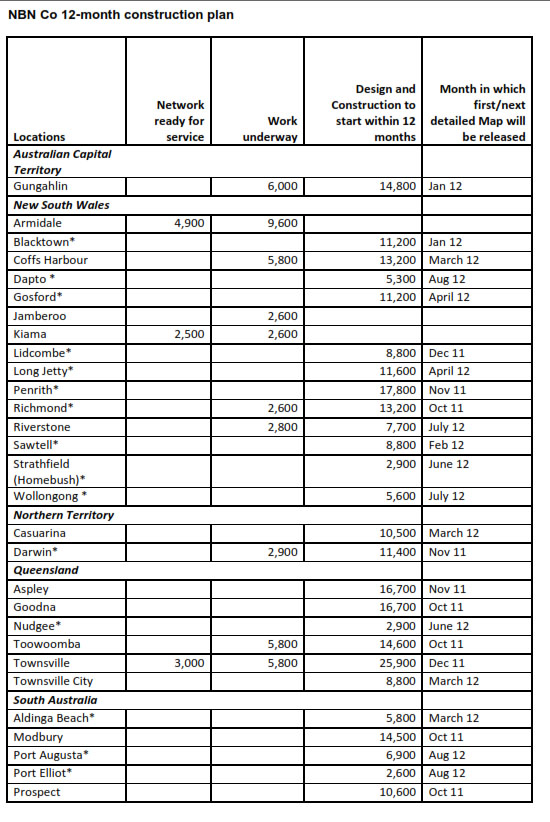 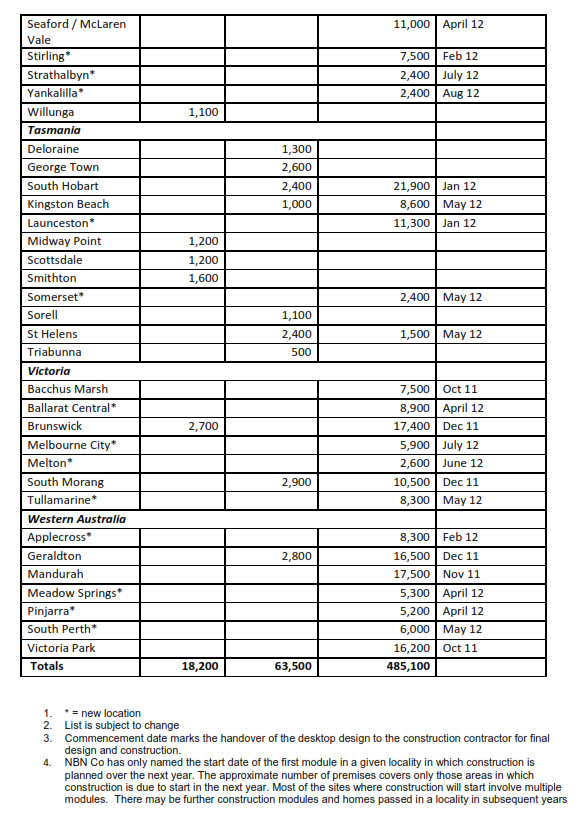