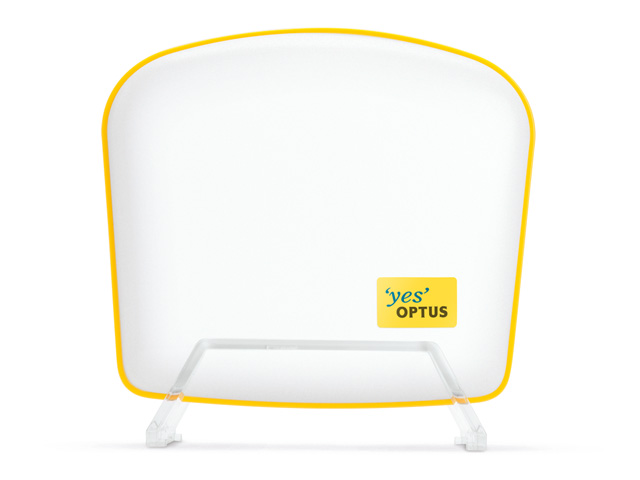 review Tired of huddling in that one corner of your house with decent Optus reception? Help is now available in the form of the Optus 3G Home Zone, a femtocell 3G base station that promises to boost your Optus reception up to five bars.

Granted, you’ll have to pay for the service yourself, and this will be a tough pill to swallow for those that expect Optus to fix its poor coverage on its own dime. But it’s decent value for the asking price. Even if you’re against the idea of paying extra for better service, the inclusion of unlimited local, mobile and national calls for free through the 3G Home Zone makes that additional monthly spend more agreeable.

Design
The 3G Home Zone looks like your everyday wireless router, only smaller and with a splash of white paint on it. A stand is included in the box for sitting it up vertically, although we’d imagine most people would prefer laying it horizontally to save space – a placement that’s technically possible, but not ideal due to the network and power cables sticking out from the bottom.

A row of white LEDs at the top indicate power, network connection, and an active call, and there’s an extra network port on the back to make up for the port the 3G Home Zone takes up on your broadband router.

Features
The 3G Home Zone works by connecting to the Optus network through your fixed broadband service. This creates your own personal 3G ‘zone’ that your phone, tablet or mobile broadband service connects to instead of the nearest public cell tower, with coverage good for a 30-metre radius from the base station. Once you’re out of range, the call hands over to the public network, and any calls that originated from the 3G Home Zone continue to be free for the duration of the call.

Up to twelve Optus mobiles (including the primary mobile) can be registered with the Home Zone using an online portal, but only four mobiles can be connected simultaneously, and only the primary mobile gets the unlimited calls deal. The bandwidth requirements shouldn’t present a problem if you’ve got an ADSL2+ or cable broadband service; Optus recommends a minimum speed of 128kbps for a single user, and a 1Mbps download speed (with a 512kbps uplink) for four simultaneous users.

Data usage, on the other hand, may be problematic for those on lower rate plans. Optus estimates 1.5GB of data usage per month for one “average” user, and 3.5GB a month for four users – a figure that will jump if you make good use of the unlimited calls offer. These figures assumes 100 two-minute calls a month per user, with each call generating roughly 60kbps. According to our Optus contact, 3G Home Zone usage will be unmetered for Optus fixed broadband customers in the future.

This boost in reception also works for 3G data, although we can’t imagine many scenarios where you’d take advantage of this. Since the data you use while connected to the 3G Home Zone comes out of both your 3G and broadband data allowances, why not just use Wi-Fi and save your 3G data for when you’re out of the house? Even if you’ve reached the monthly download limit of your broadband service and want to switch to 3G, the throttled speed of your fixed broadband connection probably won’t be fast enough to support the 3G Home Zone.

Performance
Setting the 3G Home Zone up is a piece of cake. After you register it through the online portal, it’s a simple matter of adding the phone numbers of everyone who’ll be using it (a list that you can modify as many times as you want), and twiddling your thumbs while you wait for the 3G Home Zone to be activated – a process that took an hour and a half when we set it up.

Overall, the service worked exactly as advertised. Before installing the 3G Home Zone, our test environment (a small third-storey flat in Randwick, NSW) would average 1-2 bars of reception (or
-100dBm/decibels per milliwatt) and roughly one in every 5 calls would drop out. This jumped to
-75dBm (reported as full signal strength on our HTC Sensation review unit) with the 3G Home Zone installed, and our calls stopped dropping out altogether – provided we stayed at home for the duration of the call (see below). This performance wasn’t as good as the -65dBm we got when using a Telstra service, but it was a definite improvement nonetheless. Without fail, all of our calls were faithfully routed through the 3G Home Zone, with each call preceded by three beeps to indicate a successful connection.

That said, the 3G Home Zone wasn’t completely faultless. There were a couple of calls during our review period where voice lagged a second behind, leading to the same disjointed conversations you sometimes get when making a long distance call. This kind of degradation is to be expected when there’s a lot of traffic on the network, but we also got it when our network (which has a line speed of 6.25Mbps) was completely quiet. We also ran into problems when moving between the 3G Home Zone and the public network mid-call. Since our test area has 1-2 bar coverage outside the building as well, the transition to the public network would cause around half of our calls to drop out when we walked outside during a call.

Conclusion
The 3G Home Zone is good for what it does, which is fix the problem of poor reception in your home. Even without that capability, the starting price of $5 per month is a bargain for adding unlimited phone calls to your rate plan – assuming, of course, that you’ll take advantage of this functionality enough to make it worthwhile. The value proposition isn’t as good if you’re on a $49 or lower plan though, as the cost jumps to $15 a month. The Home Zone can also be purchased outright for $240, which is the only option for prepaid Optus users that want to be the primary user on the account.

But the 3G Home Zone is really only a stop-gap solution for the much larger problem of Optus’ prevalent spotty coverage. Never mind the fact that it’s cheeky of Optus to expect us to pay extra for reliable 3G service that we should be getting anyway; if you’ve got bad Optus reception in other areas you frequent, you’ll continue to get bad reception there.

This leaves us in the rather odd position of recommending the 3G Home Zone but feeling dirty about doing so. If you’re currently locked into a $59-a-month or higher Optus plan and aren’t getting good reception, the extra five bucks a month will at least make your service usable while you’re at home, and the appeal becomes greater still if you’ve got other people in your household with Optus mobiles.