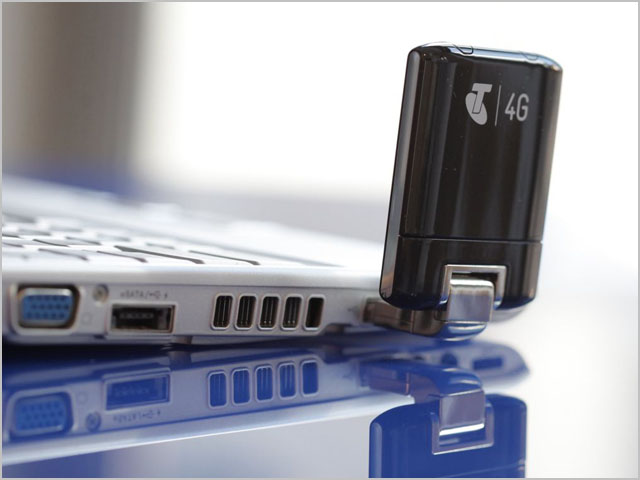 Dubbed the Telstra USB 4G, the mobile modem will be the first Telstra device to work on its new 4G network, which will initially cover Melbourne, Brisbane and Sydney city centres and was initially announced at the Mobile World Congress conference in Barcelona earlier in the year.

Telstra notes 4G or Long Term Evolution (LTE) coverage — the next-generation mobile standard which can better cope with the huge growth in data-intense smartphones — will initially be available within 5km from the GPO in each city, with speeds theoretically capable of reaching up to 100 megabits per second. However in most situations it’ll range between 60 and 80 megabits per second, Telstra CEO David Thodey said earlier in the year.

The 4G USB modem will run on both Telstra’s 4G and 3G HSPA networks, meaning in regions where the 4G roll-out has yet to occur, customers will be able to use the device on Telstra’s existing 3G network which covers nearly 99 percent of Australia’s population. Telstra will limit the initial August 29 availability of the devices to just 2000 business customers, saying the roll-out forms a “commercial pilot” ahead of a full-scale launch later in the year.

“Australian businesses already tell us they want fast, reliable mobile broadband with more than two million customers connecting to our network for internet on the go,” Thodey said in a statement this morning. “Our investment in next-generation 4G mobile technology will help meet Australia’s growing demand for faster speeds and create additional capacity in our network.”

Account managed business and enterprise customers will be able to purchase the 4G modem through their Telstra Business or Telstra Enterprise and Government account managers from the 29th August. While the telco is still remaining coy on when exactly the 4G network will become available for consumers, it’s now created a notifications page which will allow those keen to be amongst the first to experience the network to be contacted by Telstra closer to the date.

Other Australian carriers are also slowly adding 4G capabilities. Vodafone Hutchison Australia says it’ll be ready to turn on 4G services when they feel “the time is right” thanks to their multi-million dollar network upgrade works, while Optus is also believed to have undertaken a series of 4G trials.