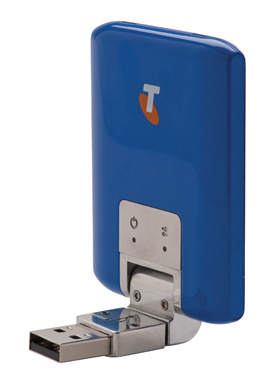 Telstra has unveiled a new USB modem that will allow customers to take advantage of the dual-carrier speed upgrade it switched on in its Next G mobile broadband network last month, saying the device would go on sale “later this year”.

The dual-carrier technology was quietly switched on in January. It allows Telstra customers to send and receive wireless data using two channels simultaneously, with the telco claiming it allows peak network downlink speeds of 42Mbps, although actual customer speeds will be lower.

In a statement issued as part of its visit to the Mobile World Congress trade fair in Barcelona this week, Telstra claimed the new device built to take advantage of the dual-carrier technology would deliver typical speeds in selected locations “around double” those seen with the fasted 3G devices available in Australia today. The modem was built by Sierra Wireless and has been dubbed the “Ultimate” edition.

“With HSPA+ Dual Carrier technology we expect to offer speeds that are comparable to the initial speeds we have seen reported from some fledgling 4G LTE networks,” said Telstra chief executive David Thodey. LTE stands for Long Term Evolution and represents a next step for 3G mobile phone networks as they progress to the next level of speed and capacity — the fourth generation or 4G.

Thodey added that while LTE remained on Telstra’s technology roadmap, there was a “huge amount of potential” remaining in the High-Speed Packet Access (HSPA+) technology the telco currently uses.

“We will take full advantage of this by again doubling our peak network speeds to 84Mbps through the implementation of HSPA+ Dual Carrier plus MIMO (multiple input, multiple output) technology during 2011,” Thodey said.

The news comes as Telstra’s Next G network continues to get traction with consumers. Revenues from the telco’s mobile division were up $145 milion in the second half of 2009 over the same period in 2008. The number of Telstra customers in mobile-only households — households without a fixed connection at all – was also growing rapidly each six months.