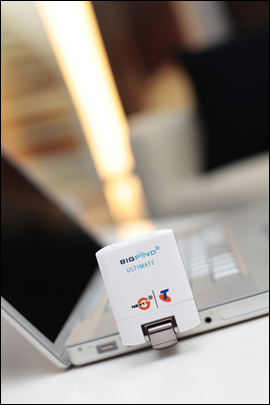 Telstra today started selling its upgraded mobile broadband modem to the wider consumer market, after several months of offering the device — and its theoretical network speeds of up to 42Mbps — to big business customers and the government sector.

The telco’s Ultimate modem is — on paper — up to twice as fast as Telstra’s existing USB modem. However, customers will need to be in a coverage area which supports the increased speeds through the High-Speed Packet Access (HSPA+) specification the device uses.

So far, those areas are limited to capital city central business districts, as well as some airports, “selected metropolitan hubs” and more than 100 regional centres. Typical download speeds in those areas will range from 1.1Mbps to 20Mbps — comparable to speeds offered through ADSL2+ broadband.

Telstra will offer the Ultimate USB modem for zero dollars upfront on a number of mobile broadband plans on a 24-month contract. Its statement today did not disclose what it would sell the modem for outright, but it has previously stated the upfront cost as $299.

And that’s not all the telco is planning for its Next G network.

Telstra has previously said it was planning to again double its peak network speeds from 42Mbps to 84Mbps in 2011, through the implementation of the HDPA+ Dual Carrier plus MIMO (multiple input, multiple output) technology.

The next step after that will be the introduction of Long Term Evolution (LTE) technology, which rival carriers such as Optus are also planning.