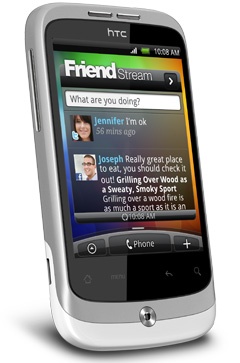 Telstra and HTC this afternoon revealed that the telco had won an exclusive deal to launch HTC’s Android-based Wildfire handset in Australia in August — but details remain scant as to pricing and availability.

The Wildfire is commonly seen as a smaller and cheaper version of HTC’s flagship handset, the Desire, which Telstra launched to great success in Australia earlier this year. The Wildfire sports a smaller screen — 240×320 pixels, compared with the Desire’s 480×800 and a slower CPU — the Wildfire’s chip is a Qualcomm model running at 528Mhz, compared to the HTC Desire’s 1GHz edition.

However, many of the other specifications between the handsets are similar — for example, both have a 5 megapixel camera, and they both run version 2.1 of Google’s Android operating system.

In a statement, HTC Australia and New Zealand sales and marketing director Anthony Petts said the Wildfire would bring HTC’s Sense user interface — which runs on top of Android — to a “young audience”. And Telstra executive director of Mobility Products Ross Fielding described the Wildfire’s price tag as “ultra-affordable”.

Telstra will sell the Wildfire in white or black models, with pricing to be announced ‘closer to launch’. Telstra’s Fielding has also posted further information about the Wildfire in a blog post on Telstra’s Exchange site. It remains unclear how long Telstra will have an exclusive on the handset for.