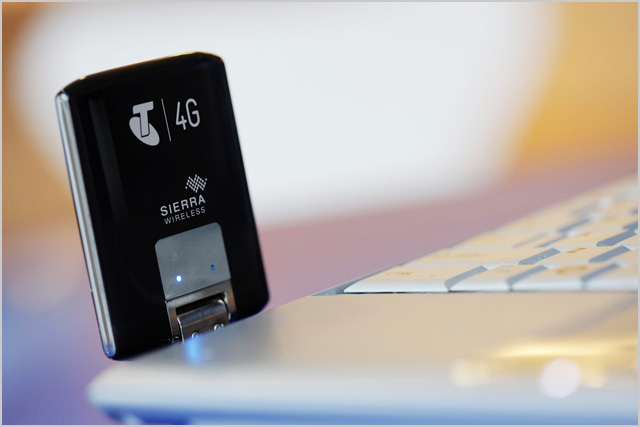 news The nation’s largest telco Telstra today revealed it had officially switched on its fourth-generation (4G) mobile network across Australia following a soft-launch several weeks ago, with the 4G coverage now live across capital city central business districts and more than 30 other centres around the nation.

The upgrade will effectively double the top-line speeds which Telstra is able to offer customers in the supported 4G coverage areas, typically located in high-density areas. Telstra’s current 3G network is based on the HSPA+ standard and features typical download speeds between 1.1Mbps and 20Mbps, while the 4G component will offer speeds ranging from 2Mbps up to 40Mbps. Upload speeds, today between 500kbps to 3Mbps, will be increased to between 1Mbps to 10Mbps.

The 4G component of Telstra’s Next G network also differs from the existing 3G component in that it uses the 1800MHz spectrum band, while the 3G aspect runs on the 850MHz spectrum band. Customers will be automatically switched between the two networks, which will run side by side, when they connect to Next G.

In a statement detailing the rollout, Telstra chief executive David Thodey was effusive in his praise for the new technology. Both Optus and Vodafone are currently planning similar 4G rollouts. “Today marks a new high-speed chapter in Australian mobile telecommunications,” said Thodey. “Telstra’s 4G network delivers mobile speeds scarcely imagined a decade ago, making it easier for people to connect with the things they need and love when on the move.”

“The superfast speeds mean consumers can download songs faster, get TV shows in minutes and do more things simultaneously,” Thodey added. “This is just the beginning. Telstra 4G will allow our mobile devices to perform even more advanced tasks and open the door to a host of innovative high-speed services that have yet to be conceived.”

According to Telstra’s statement, the telco’s 4G coverage is available in the following capital city CBDs and airports: Sydney, Melbourne, Brisbane, Perth, Adelaide, Darwin, Hobart and Canberra.
In addition, the coverage extends to the following cities (within 3km of the general post office in each city:

In addition, the telco is planning to launch its 4G network in some 50-plus additional locations across the country by the end of 2011 — including major centres in every state. However, portions of that rollout will depend on the telco’s ability to buy spectrum from the Australian Communications and Media Authority.

The business modem can be bought on a similar range of plans — including, Telstra said, for zero dollars up-front on the telco’s $39 monthly plan over 24 months, which comes with 4GB of included data. And Thodey hinted at forthcoming 4G smartphones in the pipeline for Telstra as well.

“We know there is a huge appetite for 4G-powered smartphones and tablets and Telstra is working with some of the world’s leading manufacturers to bring some of these devices to customers in the first half of 2012,” Thodey said.

For further detailed information about the rollout, Telstra has made available a number of fact sheets (all in PDF):