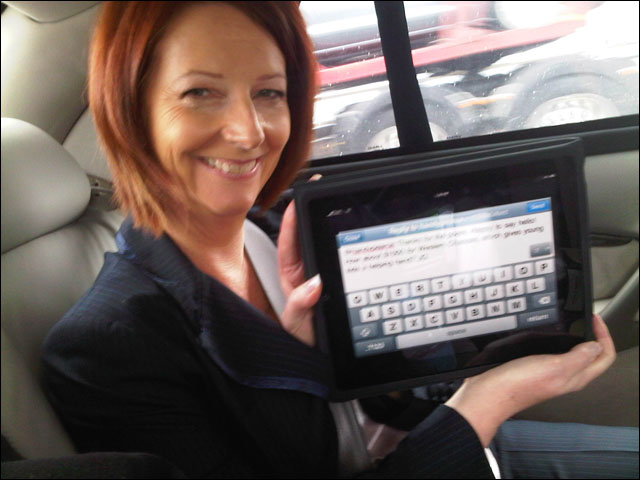 Queensland Premier Anna Bligh has been forced to defend her claim that the state is the first government to allow ministers to read their briefing notes via Apple iPad, with a number of commentators pointing out a similar move by the Australian Capital Territory revealed just weeks ago.

On Tuesday, Bligh told an IT industry lunch the state would become the “first jurisdiction in Australia to allow ministers to read their cabinet bag via their iPad”. The cabinet bags contain briefing documents issued to ministers to aid them in their work, containing memorandums and reports from departments and other branches of government. Queensland commissioned a local firm to develop a secure application to facilitate the shift.

However, a number of commentators have used online forums such as Twitter to point out to Bligh that the ACT flagged a similar switch several weeks ago.
The Canberra Times reported on 12 July that all ACT Government cabinet papers would be shifted onto the iPad, in a big to save up to $80,000 in printing costs each year.

However, on Twitter, Bligh’s social media team (marked by the ‘Prem_Team’ flag on her account) said the ACT was “essentially using a PDF e-reader, not a custom iPad app”. “Qld Cabinet uses a custom app which is the first of its kind in Australia,” the account added. “Hats off to Qld ITC talent.”

The Caberra Times report noted that the territory’s ministerial iPads have had all of their other features disabled so that ministers focus on the actual documents. The Premier’s Twitter account added that the Queensland app allowed for the remote transfer of documents to the ministerial iPads, which “addresses security issues that forced others to disable features on their iPads”.

“It’s not a lie”, the account said of the claim that Queensland was the first with such a system.”

A number of other high-profile politicians are known to be enamoured of their iPads. During the 2010 Federal Election campaign, Prime Minister Julia Gillard was snapped with one of the devices (see photo above), while fellow Labor MP Ed Husic read his maiden speech in parliament from his iPad last year, and Shadow Communications Minister Malcolm Turnbull also uses one regularly.