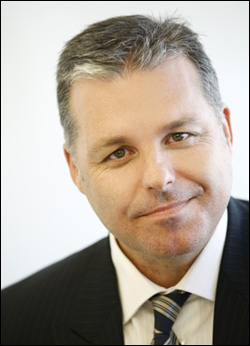 Technology giant CA this morning confirmed its local managing director Brenton Smith (pictured) had quit to join another local technology vendor, with the company looking for a replacement.

In a statement this morning, the company’s external PR agency confirmed the news, which was first reported by the AustralianIT. “At this stage the only information that I know is that Brenton has decided to pursue new challenges with another technology firm and that CA wishes him all the best,” a spokesperson said.

“Chris Wilson will be the acting area vice president for ANZ until CA appoints the new leader,” they said.

The executive has been one of the more low-profile managing directors in the Australian technology scene, and has rarely made public statements about the local market. However, Smith has a strong history in Australia’s IT industry — having been the local managing director of business intelligence player Business Objects for three years from 2002, leading Brightstar’s IT group in Australia and leading SAP’s Western Australian operations.

Richard Batka — the vice president for solutions sales at CA’s Asia, Pacific and Japan divisions, said in a recommendation on LinkedIn for Smith that he had been “the foundation of the transformation of CA in South East Asia and the Pacific region, a task that was unachievable, according to many”. Smith proved the naysayers wrong in a very short period, Batka added.

In a profile on Smith published last year, the executive noted he loved the dynamics and the ever-changing nature of the IT industry. “It is never boring; it is always exciting and interesting,” he wrote. “I’ve loved it from the first minute I joined, all the way through. At the moment it’s changing every two years. Where was cloud two years ago for instance?

The biggest influence in Smith’s career, he said at the time, had been Les Hayman, SAP Ambassador and former president and CEO for SAP in the Asia-Pacific region. “The inspiration that he provided me was leadership through motivation,” Smith said. “He is a brilliant speaker and it has always been apparent to me that he gained huge respect, following and rapid progression through the ranks at SAP partly as a result of this. It’s something that I definitely aspire to.”

For his part, Wilson is a CA veteran currently serving as the company’s local vice president of solution sales. He has been with CA for the past 16 years.