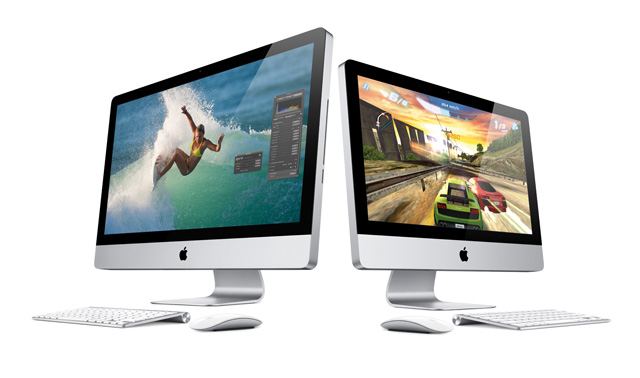 The new line-up of iMacs features upgraded quad-core processors based on Intel’s Core i5 or i7 lines, with clock speeds ranging up to 3.4Ghz. Apple is billing them as featuring “an integrated memory controller for an amazingly responsive experience”, alongside a new media engine to boost high-performance video encoding and decoding.

There’s also a new port on the new iMacs — which connects to devices which use the ‘Thunderbolt’ standard developed by Intel and Apple. The port looks and functions exactly the same as the previous DisplayPort outlet, which has been used to connect Apple machines up to larger displays. But it is also designed to connect at high speeds with other devices such as external hard disk drives. And it still can be used to connect up extra monitors to the iMac.

The new iMacs also come with a new high-definition camera built-in, designed to support Apple’s FaceTime videoconferencing tool, introduced on its iPhone line. It supports HD calls between all FaceTime-enabled Macs and standard resolution calls with the iPad 2, the iPhone 4, the current iPod Touch and other Intel Macs.

In Australia, the new iMacs are available now through Apple’s online store, in addition to its own retail stores and authorised resellers. The 21.5″ model of the iMac comes in two configurations

There are also new 27″ iMacs, which also come in two models:

You can also upgrade your iMac by selecting an Intel Core i7 CPU up to 3.4GHz, adding in additional hard drive capacity up to 2TB, adding a 256GB solid state drive, and additional DDR3 memory.