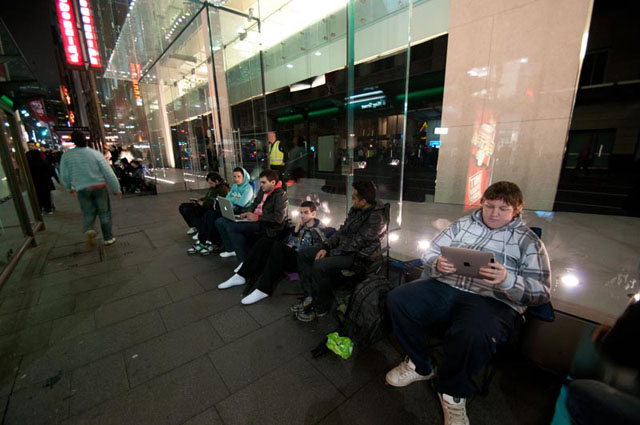 Iconic technology manufacturer Apple late tonight revealed the second version of its flagship iPad tablet would go on sale in Australia from 5pm this Friday 25th of March, with the device to be sold from the company’s own retail stores as well as local third-party reseller partners.

The company also revealed pricing for the iPad 2. The top of the line model, with 64GB of storage space and an on-board 3G mobile broadband connection will go for $949, and prices will scale down to $839 and $729 for the 32GB and 16GB 3G models respectively. The Wi-Fi only version of the iPad 2 will sell for $799 for the 64GB model, $689 for the 32GB model and $579 for the 16Gb model. All of the prices listed here include GST and are in Australian dollars.

The prices are not too dissimilar from the cost of the same devices in the United States, with most models suffering a price hike of less than $100. Multinational technology giants usually add a premium onto global products shipping in Australia, ranging from a few percent to — for some companies — as high as 50 percent or more.

Apple’s new iMovie and GarageBand apps for the iPad will be available through the company’s App Store, and will go for $5.99 each. In addition, Apple will sell its iPad Smart Covers locally in a range of colours for $45 for the polyurethane model, or leather for $79.

When the first iPad went on sale in Australia in May last year, hundreds of Apple fans around the nation braved a cold night on city streets to line up outside Apple stores to be one of the first to buy one of the Apple tablets. Apple scheduled the launch of its new Bondi Junction store in Sydney to coincide with the launch on the morning of May 28.

The Apple store in Sydney’s central business district is a popular location for fans to line up at; the store has hosted several lengthy queues — sometimes lasting for more than one night — for devices ranging from the iPad to various versions of the iPhone.

This year, Apple fans will also be able to pre-order the iPad online before the physical stores open — from 1AM on this Friday morning, the company’s Australian store will begin taking iPad orders from Australians.

Australia’s cadre of mobile telcos don’t sell the iPad directly, unlike the iPhone, but they do sell prepaid 3G plans for the device. Telstra recently said that more than 100,000 iPads had been connected to its Next G network, and the company will maintain its pre-existing pricing options when the iPad 2 launches.

The iPad 2 represents a substantial upgrade to the original iPad. Perhaps the most obvious new features include a design that is 33 percent thinner than the original model, coming in at 8.8mm thick, and a lighter weight, with the Wi-Fi version of the iPad coming in at 601g compared to 680g, and the 3G version at just over 600g, compared with 730g for the old model. White and black models are both available; both with a silver back.

Apple has also updated the CPU for the iPad 2, with the new Apple-produced A5 processor retaining the same speed rating (1GHz), but adding a second core to bring the iPad up to speed with an incoming wave of devices based on Google’s Android platform and utilising NVIDIA’s dual-core Tegra architecture. And a new magnetic cover is available which can protect its screen when not in use, or allow the iPad 2 to be propped up on a table.

Like the iPhone, the iPad now comes with both front and rear-facing cameras, meaning the device is now capable of using Apple’s FaceTime videoconferencing application, and it also now comes with a HDMI output port — meaning it can export 1080p video to your television. The rear camera can record 720p video at 30 frames per second.