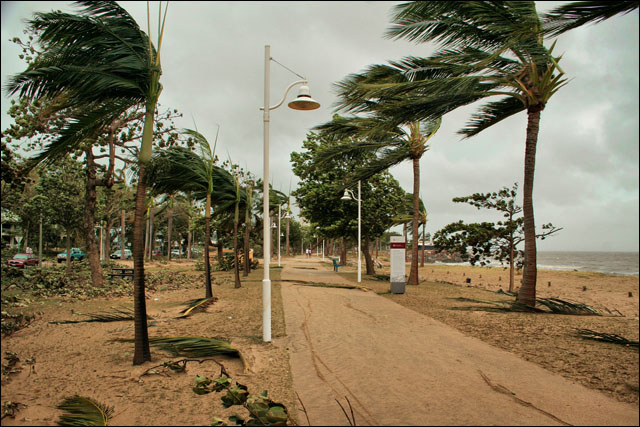 The nation’s largest telco Telstra this morning revealed it had lost a key network link in Far North Queensland and would suffer some disruption to emergency services calls, as telcos in general continue to struggle with a trail of destruction in the state left in the path of Tropical Cyclone Yasi.

In a statement, Telstra said the link had lost mains power and backup generators. It was flying in fuel with a helicopter and hoped to have it restored shortly. But in the meantime, some communications would be severed for those north of the town of Ingham.

“The Ingham link is necessary for us to provide voice and mobile services to our customers north of Ingham to Cairns. These links normally operate on backup power, but a combination of flooding and emergency services ‘red zones’ means we are unable to access and repair the issue immediately,” the telco said.

“During the outage, some customers may be experiencing a loss of Telstra services to 13, 1800, STD, IDD, mobile and Triple Zero (E000). In addition, some media broadcasts may be affected. Standard phone calls over the local copper network are operating as usual. Customers who call [emergency triple zero] will be asked to contact their local emergency services directly.”

However, the telco later clarified it believed all triple zero calls were actually getting through — and anyone who couldn’t get through would get a recorded message with details of local emergency services.

The news comes as telcos continue to struggle with the Queensland situation. In a blog post yesterday, Telstra director of service delivery for its Northern Region, John Parkin, wrote that the telco was seeing “scattered customer impact from Carins to Townsville” with relation to landline and broadband services.

About 15,000 landline phones appeared to not be working, Parkin wrote, and over 60 mobile towers were without service. About 450 network sites — such as exchanges, mobile towers and roadside cabinets — were at that stage without power, and were operating on backup power.

“We anticipate that many network sites will be damaged,” Parkin added. “We will be assessing the worst hit priority sites in consultation with emergency service crews so that we can commence repairs.”
However, it wasn’t all bad news for Telstra customers — despite the problems, its mobile network was actually operating normally in affected areas — as many of the sites affected had overlapping coverage from different towers.

Optus has not yet released a statement today on its network, but yesterday the telco told ZDNet.com.au 52 of its mobile base stations were impacted, and, like Telstra, a number of its stations were running on battery backup.

Yesterday VHA said Vodafone mobile services between Cairns and Bowen and in central Mackay had gone down, although “small pockets” of services might be available in some areas. Since that time, some access has been restored. Customers of its 3 brand could roam onto Telstra’s network where services had been disrupted. iiNet’s network status page currently states the telco suffered no outages due to the cyclone.