Almost three weeks after its rivals launched Samsung’s hyped Galaxy Tab Android tablet on Australian shores, the nation’s biggest telco Telstra has come to the party, launching the same device on a range of monthly plans.

In a blog post on its Exchange site this afternoon, Telstra revealed it would sell the tab on three monthly plans — costing $29, $49 and $79, and with included monthly data allowance of 1GB, 7GB and 12GB respectively. Each plan will come with $10 worth of included allowance for standard voice calls and SMS messages to any Australian phone network. 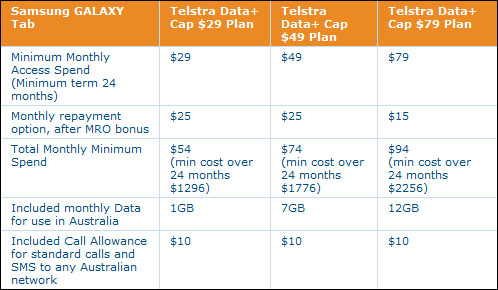 Telstra’s top-end plan costs more than the high-end plans of either Optus or Vodafone, but its cheapest option is also cheaper than that of Optus (while remaining several hundred dollars more expensive than Vodafone’s cheapest plan.

The telco has also kept its promise to launch its self-branded T-Touch Tab Android on a similar range of monthly plans; the device has so far only been available as a prepaid option. The only difference between the Galaxy Tab and T-Touch Tab plans is that customers buying a T-Touch will pay only $6 per month to buy the tablet, or zero dollars if they are on a $79 plan.

The news comes as tablet fever continues to sweep Australia.

US display giant ViewSonic will tomorrow unveil plans to bring its 7″ and 10″ ViewPad tablet devices to Australia at launch event next week in Sydney. And analyst house Telsyte yesterday predicted that over one million tablet devices would be sold in Australia in 2011.

The analyst house predicted the local tablet market would grow in value from $292 million in 2010 to $1.35 billion in 2014. It expects Apple to remain the market leader with 60 percent market share — although that is expected to fall from over 90 percent in 2010.

“Android devices are expected to have 35 percent market share in 2011 with Blackberry tablet OS and other platforms making up the rest of the market,” the analyst house wrote in a statement.