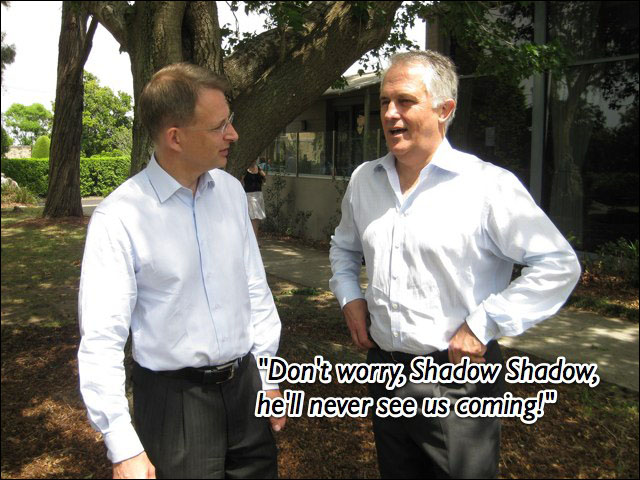 opinion Normally I agree with ZDNet.com.au telco columnist David Braue’s hard-hitting views on Australia’s telecommunications industry one hundred percent — after all, I created the Full Duplex blog which he has the honour of running.

I guess that makes David kind of like my Sith apprentice. After I created the Death Star of telco blogs and populated it with hundreds of reader comments, David’s now turning it towards his own nefarious ends. However, leaving my bile-filled rants behind, he’s now turned towards reasoned commentary and in-depth analysis. Which, as Whirlpool creator Simon Wright knows only too well, clearly has no place in Australia’s telecommunications sector.

But I digress. My real point here is that David has gotten it wrong with his contention this week that Shadow Communications Minister Malcolm Turnbull and his happy NBN wrecking crew has some form of “personal grudge” against the NBN and its chief proponent Stephen Conroy.

David paints Turnbull as “blind opposition”, “an albatross around Stephen Conroy’s neck” and the Coalition in general as a bunch of “laboriously lamenting Luddite Liberals” which is coming across as ridiculous roadblocks in the way to implementing a common sense fibre nirvana. However, in fact, nothing could be further from the truth.

In fact, Turnbull is the thinking man’s alternate Communications Minister — and one who already has his own telco legislation being considered in parliament, despite being in Opposition.

The fact is that Turnbull — despite my advice to him that NBN opposition wouldn’t get him anywhere (shows you what journalists know!) — has already achieved a remarkable amount of progress in his Shadow Ministry. He’s got most of Australia’s business leaders backing his call for an NBN cost/benefit analysis, he’s mobilised the Coalition to reform its stodgy telco policy and dump its opposition to the long-awaited separation of Telstra, and he’s got the Greens and Independents seriously considering whether they will support his personal legislation to make the NBN more transparent.

You could hardly have expected Turnbull to do more in the scant month and half he’s had the portfolio. I call what he’s achieved so far nothing short of stunning.

The really amazing thing about the last six weeks of telco debate is how Conroy keeps on giving Turnbull free kicks. In his second term as Communications Minister, with a Government and population broadly behind the NBN, Conroy simply doesn’t have to engage with Turnbull to drive the policy forward.

And yet, at every opportunity to debate Turnbull (such as last night’s Insight program), Conroy turns up at the drop of a hat and trots out the same tired old arguments, while Turnbull sits at the other end of the table with his charming aristocratic smile, proffering Conroy back his own evidence and looking like butter wouldn’t melt in his mouth.

Turnbull has a flexible mind. At every step of the way over the past six weeks he has taken every opportunity that has passed his way to learn more about his portfolio and to advance the debate forward as fast as he can — in the direction he chooses. In contrast, it’s Conroy that currently looks like he has a personal grudge — a grudge against anyone who dares question his pet NBN project. It’s this arrogance that has lost Conroy any smidgeon of support he once had for the internet filter project, and now it’s spreading to the NBN as well.

In Conroy’s world, any criticism of the NBN project is blasphemy. But as Turnbull has pointed out — that argument simply represents a false dichotomy.

Why the hell should Turnbull let Conroy have his way now? He’s got the Senator on the run. All he needs to achieve is some modest concessions from the Government on the NBN — which he appears close to — and six weeks after the Coalition lost the election (in a manner of speaking), he’s got a claim to being the most successful member of the Shadow Cabinet, on a national issue which Tony Abbott clearly knows nothing about.

Sounds like a comeback recipe to take that little problem off Mr Rabbit’s hands.

The ultimate victory, of course, in this daily battle, would be if Turnbull could get his NBN transparency bill voted into law before Conroy could get his Telstra separation bill done. At that point you’d have to ask: Who’s the better telecommunications legislator?