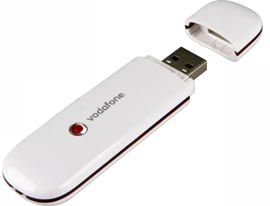 Mobile telco VHA today cut the price of its prepaid mobile broadband starter pack from $79 to $49, including 1GB of data.

The pack comes with a USB modem usable on both Windows and Mac OS X and 1GB of included data, which must be used within a month of the purchase date. However, VHA did not disclose the real-world or theoretical speeds which the device is capable of on its networks in a statement announcing the price cut, and the information does not appear to be listed on its web site.

A spokesperson for VHA has not yet responded to an emailed request for comment on the speeds available through the modem.

The starter pack will be available at the stores of both the mobile telco’s brands in Australia — Vodafone and 3. Customers are also able to sign up for month by month mobile broadband plans with VHA. The telco currently appears to have a special rate for the plans until 30 September — with $15 per month getting you 1.5GB of data, $29 getting you 4GB, $39/8GB and $49 for 10GB.

VHA also today launched a 3G Wi-Fi modem that use wireless access to share a 3G mobile broadband connection between up to five Wi-Fi-enabled devices. The device has been dubbed ‘Pocket WiFi’.

The device — which was manufactured by Chinese company Huawei — is available outright through a starter pack for $119, including a prepaid VHA SIM with 1GB of data through Vodafone or 200MB of data through 3 — with both quotas expiring within 30 days. Alternatively, customers can pick up the device for $0 on selected 24-month plans.

The Pocket WiFi has a battery life of five hours and can be charged though mains power or USB.