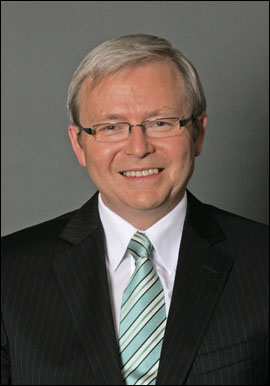 Prime Minister Kevin Rudd has backed Communications Minister Stephen Conroy’s sustained attacks on search giant Google over the company’s bungled collection of Wi-Fi payload data by its Street View cars on their travels around the globe.

“Minister Conroy has accused Google of hoovering up banking details, which a Google person says is wrong,” a journalist asked Rudd in a doorstop interview yesterday. “Is the Minister prejudicing an [Australian Federal Police] investigation of this continuing claim?”

Answered Rudd: “The Minister’s statements speak for themselves, I’m sure they’ll be a continued robust exchange between himself and the various companies concerned. I’m sure they’ll both argue their positions — I stand by what the Minister has said.” The transcription is available online.

The comments come as technical organisation the Systems Administrators Guild of Australia (SAGE-AU) yesterday criticised Conroy for stating that Google may have collected internet banking details in what he has described as possibly “the largest privacy breach in history across Western democracies”.

But the Wi-Fi issue continues to dog Google, with Attorney-General Robert McLelland revealing on Sunday that he had referred the matter to the Australian Federal Police. Google has maintained that the collection of data was a mistake and stated that it was talking to the appropriate authorities to answer any questions they have.