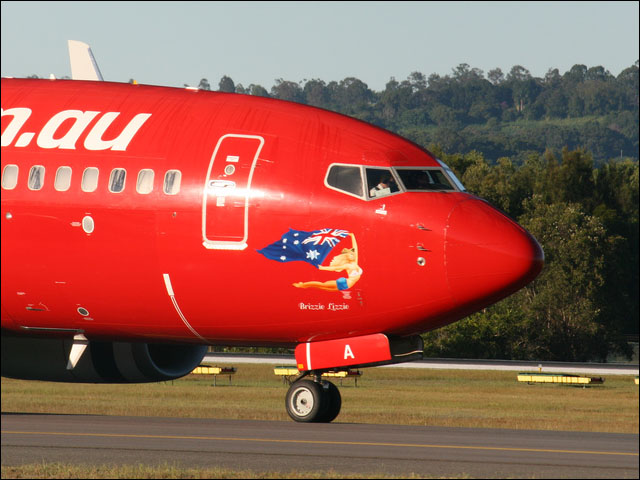 If it was any other corporation, Virgin Blue would be completely justified in the sackings. After all, browsing pornography in the workplace is a social no-no in Australian society. Such actions have the potential to create situations where some employees could feel uncomfortable or even threatened by the behaviour of others.

Many organisations make their adherence to social standards (and I assume there are some legal requirements in this area as well) clear by making their ‘no pornography’ policies explicit in their computer usage agreements that all employees are required to read and sign when they join the organisation — and usually at regular intervals after that.

But Virgin Blue is not just any other corporation. The company appears to have actively promoted itself in public as having a culture of slightly sexualised behaviour.

Take the company’s advertisements. This one below features an attractive young woman walking through a V Australia plane (Virgin Blue’s international brand) to a funky tune with a deep bass beat, while flight attendants wearing what can only be described as their airline’s trademark tight skirts and figure-hugging tops cavort around her, serving champagne and bending over in suggestive poses putting her to bed.

“Wow, that was so much fun,” she remarks afterwards as she sits down next to Virgin proprietor and noted appreciator of the female form Richard Branson. “Just wait until we get it up,” he responds before turning away and smirking. You can almost hear the condescending “baby” implied at the end of his sentence.

Or what about this ad, posted under one of the company’s YouTube channels. Yup, it appears that for Virgin group, it’s all about the girls.

There’s also further evidence that Virgin actively cultivates this ‘sexy flight attendant’ stereotype. In 2007, the airline lost a lawsuit which had been brought against it by eight flight attendants who had sought employment with Virgin after the collapse of Ansett.

After an application in which they were forced to “sing, dance and role play in front of a panel of young assessors”, according to the Sydney Morning Herald, the flight attendants speedily discovered that nobody over 36 was employed as cabin crew during Virgin Blue’s recruitment drive between 2001 and 2002.

In short, it appears as if Virgin was looking for young women to fill its flight attendant ranks … those approaching middle age need not apply.

Of course, the most obvious example of the airline’s attempt to brand itself as a bit ‘sexy’ is the famous picture of a blonde Australian girl painted on the front of every Virgin Blue aircraft … wearing what appears to be a bikini top and a denim mini-skirt and waving an Australian flag.

Now the problem with Virgin Blue’s sackings over what was reported as an internet pornography ring is that they force an observer to question where the line is between “just a bit of fun”, as no doubt many Virgin executives would characterise the Branson advertisement in particular, and employees taking a step too far across the line into offensive behaviour.

To what extent, in other words, did Virgin’s own promotional material to the effect that it was a ‘sexy’ and ‘fun’ airline create the impression among some of its staff that it was OK to look up pornography at the workplace?

To investigate this line further we’d also need to know more about what goes on inside Virgin Blue as a company. It would be necessary to see what sort of internal social gatherings the company hosts for its own staff … what kind of social standards are applied.

Is the company internally, as its ads seem to suggest, a bucket of fun, with beautiful women deliberately employed everywhere and champagne flowing for the staff, as it appears to for customers in its ads? If so, this kind of relaxed workplace ethos might have contributed to a culture where it might have been seen as OK for staff to swap pornography in a ‘progressive’ company.

This situation is far more likely. But it does give the lie to Virgin’s advertising spiel.

Now I’m not saying here that for consenting adults, looking at pornography is a bad thing — it’s up to each individual to make a decision. And there probably are even some Australian companies who don’t care what their staff get up to on their workplace computers. Just as with the individual on their personal time, it’s up to each company to decide what staff do at work — with relevance to legislation.

Neither am I saying that Virgin Blue did the wrong thing in sacking its staff over the issue.

But what I am saying is that companies need to be careful about what they imply about their company image in their advertisements and their public company behaviour. Some staff might just take those messages a little too seriously.

I’ll leave Virgin with one final question — one that goes to the heart of the matter and to the relationship between Australia’s second-largest airline and its staff. Knowing his love for women, has Richard Branson himself — the spiritual leader of the company — ever looked up pornography using a work computer?

If so, that might leave him in a sticky situation … ethically speaking.